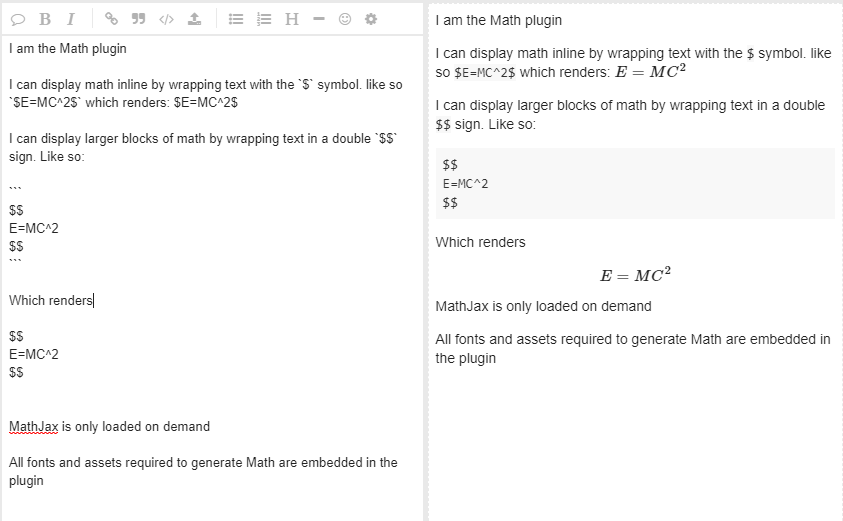 Repo: GitHub - discourse/discourse-math: Official MathJax support for Discourse Screenshot Usage The math plugin uses MathJax (default) or KaTeX to render maths. You can render blocks of maths by wrapping with $$ $$ \hat{H}\Psi=E\Psi $$ You can...

“E=MC^2” is rendered quite correctly. Fancier formatting is not more correct.

This is once again the Cowboy-Playboy cultural divide in AWE R&D. Years ago, I submitted plain-text to RolandS, despite his elaborate instructions for a uniform proprietary format for all submissions. He insisted on trying to reformat my text, and I rebelled, insisting the primitive format best expressed the original content, and that the greatest diversity of tolerated formats was more optimal engineering science. RolandS, meanwhile, obsessed with fashionable formatting, never did respond to key technical issues at odds with his AWE paradigm.

Its been this way since LaTeX was introduced in the 80s, and PDF was corporately imposed over open HTML. The Cowboy Way is to honor whatever format useful knowledge comes in, to maximize substance-over-form.

Original significant knowledge should be most-preferred, regardless of format.

What we have seen with fancy-formatted AWE publishing is excessive cut-and-paste of standard equations-of-motion. Thesis after thesis filling pages with insignificant math.

Equations and numbers are inherently textural. Any mathematics professor can read-off equations in semantic language. Its all Turing equivalent.

Really??? You were to lazy to format your submission and complain about it years later on a thread that has next to nothing to do with it?
Nobody’s forcing you to use the formatting which makes things easier to read by humans.
But if you start posting your text in ascii binary, because it’s turing equivalent though, I’m going to regard it as spam

The debate between uniformity of language and creativity is not new. Johann Sebastian Bach standardized the heights of sound. The result was an explosion of creativity. What about edited mathematical language as standardized? The same in most of fields. The world is doing better in many fields (science, medicine …). And what about AWE? The strength of creative ideas should overcome the mathematical barrier which is actually a stepping stone.

Luke, I’m not complaining, its an amusing incident. If I had bothered formatting as required, then I would be complaining about the annoyance.

Taking you at your word, the greatest AWE content imaginable, if formatted in binary to you, would be spam to you, but in that case, I would not be too lazy to decode it.

Pierre, We both believe in creating powerful new formats. Bach was not enforcing any format. Its petty enforcement of formats that is the problem. Much great music is not even written.