SkySails is the AWE partner in this latest salad of green technologies in super-yacht guise. These are not a true zero-emissions demonstrators, given large embodied-energy footprints, plus structural energy-inequities, but such aspirational design efforts may help inform how to rig and sail “super-yacht Earth”.

This would appear to me to be just renderings and “a paper”, revealing a poor understanding of wind energy. A glance at this paper shows a supposed 120 kW from six (6) “Windside” drag-based Savonius vertical-axis wind turbines, Savonius had always been known as the least-efficient type of wind turbine - well at least until certain AWE “researchers” came along…
quote: “This Windside turbine is being tested by Madison Gas and Electric is nominally rated at 10 kW AC but has never produced more than 600 watts.”
LINK: 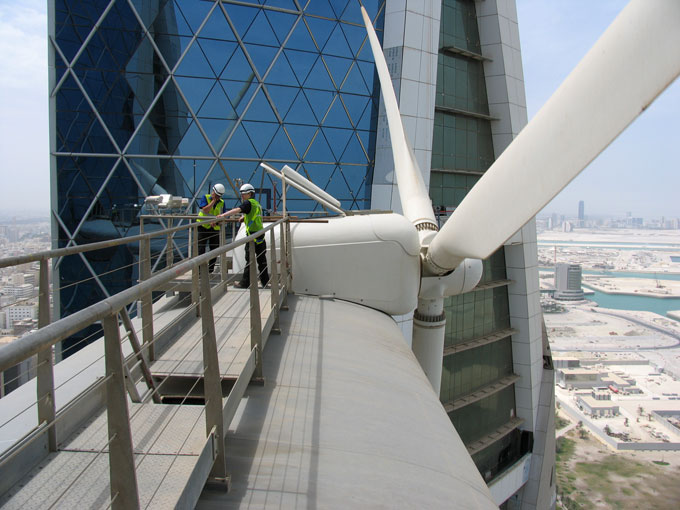 The Folly of Building-Integrated Wind

Wind turbines on buildings could produce electricity where it's needed and catch high winds above ground level. However, wind turbulence, safety, cost, and poor performance all make building-integrated wind a limited strategy.


It’s of great concern for AWE that the mere repeating of uneducated proposals by those who clearly have no grasp of the most basic energy facts nonetheless makes its way “up the food chain” like toxic mercury eaten by a small fish becomes more and more concentrated as each successively larger fish eats the previous fish. In this case you have Windside promoting typical false information in their promotional literature, taken up as “true” by a group trying to design a boat, concentrating this “bad information”, which is then further “eaten” by someone claiming to be a top wind energy researcher, and placed for further consumption and concentration by whomever reads that post. This seems to be an endless syndrome in wind energy. Ignorance knows no bounds. The result is endless millions of dollars wasted by investors who are not aware that they are being fed bad information, by “innovators” who are not up to speed on the most basic aspects of what they promote.
kitefreak December 2, 2019, 4:10pm #3

The key takeaway is yet another SkySails system being installed on an ocean-going vessel. The non-AWE features should not distract us.

The inclusion of Windside might be a sign of their bad judgement and/or poor grasp of what works and what does not. It is, unfortunately, a strong indicator of abject cluelessness. Why is it some people can see at a mere glance what others cannot discern no matter how elaborate their “analysis”? Back to that “confusion” from a “profusion of delusion”.
These “save-the-world” stunts are interesting, and nobody would be happier than me to see solar-and-kite-powered boats prevail, but we also have such feel-good events as this: https://www.washingtontimes.com/news/2019/dec/1/greta-thunberg-carbon-reduced-plan-blown-flight-ca/
Seems like if kite surfing outperforms windsurfing, kite-powered boats should eclipse regular sailboats, but devils are in the details, which might be better worked out at small scales than trying to pull container ships before everything is worked out. So, nice “takeaway” but the Windside machines are a bad sign. So are hydrogen fuel cells, since the hydrogen cycle entails very high compression losses plus fuel cells are extremely inefficient compared to batteries. Not to mention, this is proposed design, not a finished, working product, therefore it likely falls under that now-familiar “fake-future-news” category, where you talk about “press-release breakthroughs” as though they exist. “Being installed” is way different from mere talk and a “paper” promoting known bad ideas.

Skysails best recent news is Airbus installing an AWES on its new oversize-cargo ship, with no savonius device to provoke critique.

Kitesailing has been proven superior in varied cases. The Polynesians found it effective centuries ago. Pocock won a race against a conventional sailboat almost 200yrs ago. KiteShip’s OL was banned from America’s Cup competition, as unfair advantage, after it was demoed.

Citing Reverend Moon’s Washington Times newspaper on this topic is an odd choice. To their credit, Greta’s sea captain’s frequent flyer status does count, that as the paper reports, Greta’s carbon offset barely corrects. We don’t blame a 15 year old for the world being so messed up. May she soon become able to be her own captain.

Time will tell if Braemar’s AWE aspiration joins the growing list of such seasteads, like Race-for-Water and other kite equipped yachts.