We must always start from kite pull, just as Pocock, as a small child, tied toy kite to stone and as it was drawn along, how he “wondered”. Torsion never has been the kite’s best promise.
USP3987987 fig.5.

Mothra on a ring allowing facing wind directions has been described. Its two anchors could be two winches in yoyo mode as described on Scaling by size, or two pulleys-generators as for the figure 5 above, the problem to overcome for the last being the half turn as reversible wings do not exist for what I know.

Other variants can be found, comprising how build the ring and the mobile parts (winches or pulleys with their respective generators) because they undergo a huge traction from the kite.

Pierre, perhaps you mean kites that “shunt”, which kPower has designed for crosswind to-and-fro motion. 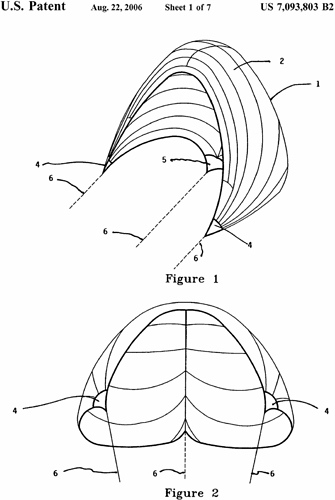 Here is shunting along an arch, like Fig5 shows without rigging details-

This is both an interesting video and maybe a step towards a solution, but the power kite seems to fly sideways by the tip cords and at low speed, with low potential power.

What lift-to-drag ratio do you estimate for Dave Culp’s SS kite?

A highly efficient power kite where the leading edge becomes the trailing edge and vice versa is likely not feasible. A possibility is using carving turns such as for kite surfing (see the fast half-turn at 33’’ from the beginning): that can be a solution to fully use the rectilinear crosswind trajectory back and forth.

The OL is L/D ~3 partly loaded; or higher, unloaded; or lower, heavily loaded. Its an interesting match to a hot paravane (water-kite), since total system L/D is then practical to progress upwind.

The paravane could be high L/D (~LD15), yet quite cheap as a reinforced concrete casting; since neutral buoyant mass is quite easy to achieve. The OL itself would also be dirt-cheap, for minimum AWES LCOE.

Carving with a kiteboard is not bad either, but then a higher L/D more expensive kite than the OL is a better match for windward performance. The trade-off between the two odd pairings is fairly even, and a race kite and foil board are the most expensive combo, and highest LCOE.

Pierre’s low tech OL kite and simple board combo will win if can just drive crosswind all the time, and never need to go upwind.

In my previous message I assume that the rig comprises elements from the figure 5, so no water element such as a board. I used the example of carving turns only for the maneuver to turn the kite fast.

Dave, please can you explain how the OL (what is the meaning of OL?) SS kite works crosswind forth and back, showing how the leading and trailing edges are reversing?

OL is KiteShip OutLeader SS ship-kite trademark. Kite simply tacks its nose back and forth, like a spinnaker sail, to fly fig5 cycles. “Dancing Hippo”.

Are the plans for OL available or may even the kite be purchased?

Thanks for the information Dave. So if the OL has a L/D ratio of 3, that leads to (L/D)² = 9. This is an interesting value compared to the usual (mine for example) 16 for soft ram kites with their tethers. On http://2e5.com/kite/nasa/reports/ there are detailed Nasa npw features comprising 2 < L/D ratio < 3.5, so a similar value. I don’t know if some among them can be reversible.

The reversibility is an important feature, allowing sweeping more and completely (unlike by using figure-eight or loop) by using the more powerful zone of the flight window (90°).

Concerning Payne’s figure 5, on the old forum Peter Sharp provided some comparable methods I attach below: 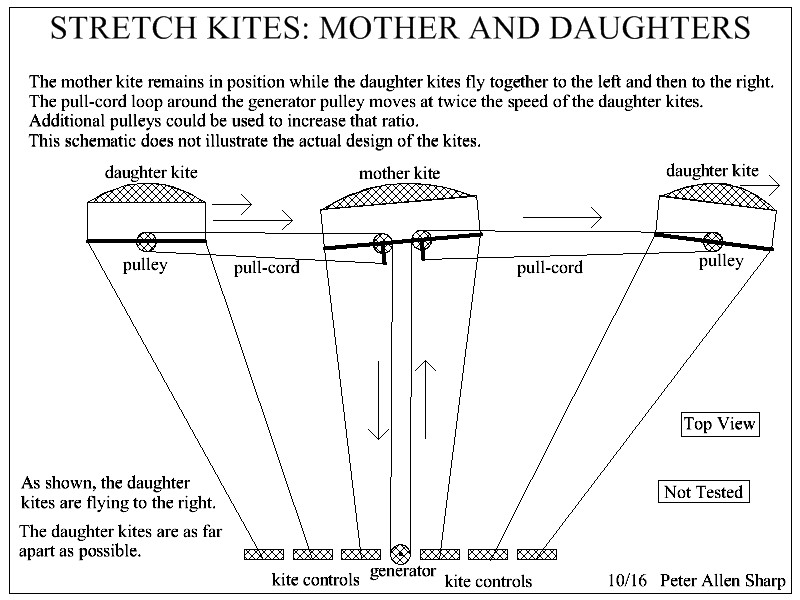 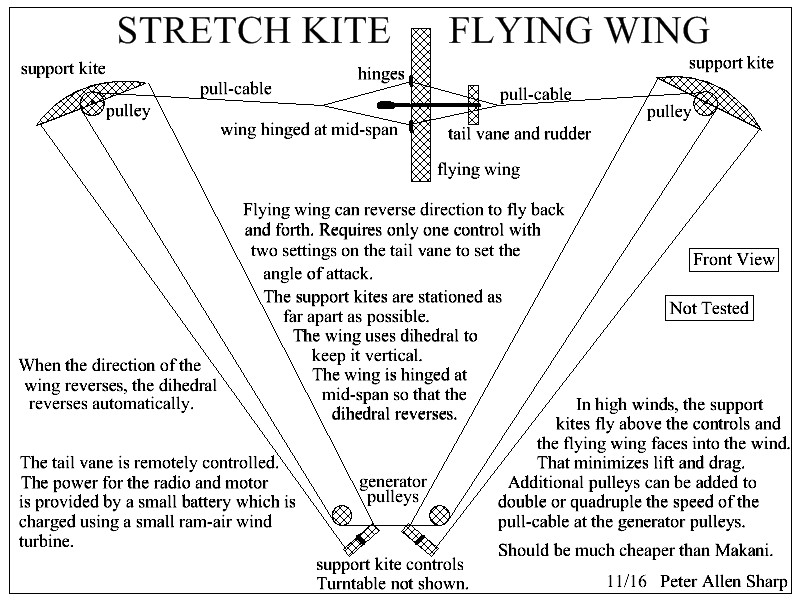 Stretch Kite Flying Wing.jpg800×600 142 KB
In the second drawing the crosswind forth and back issue is solved by hinges allowing the half-turn. I would prefer OL solving this by reversibility.

Concerning other features, these designs has an advantage to be able to have a single ground station allowing re-orientation when the wind changes. But in my opinion tests or/and an analysis of force would be required to know the real efficiency.

If no described pulley methods here are really advantageous, the yoyo mode could be used, the recovery phase occurring at each end of the transverse trajectory, so at each flight window edges, when the kite speed drops and the traction is lesser.

Nice ideas, Pierre. The fun part is how fast a few strings, wings, and pulleys can be rigged to see what happens. There is even more diverse possibilities than the entire history of sailboat rigging, and many of them will work well.

Tallak, Sadly Google/Makani bought out KiteShip in order to destroy it. Dave Culp had grown old waiting for the world to catch up to him, and he needed an exit for his family. I bailed out, but managed to acquire 3 OLs for kPower, including a 3m2 prototype Dave Culp himself made and gifted me, an 8m2 kPower founding wing, and a 1m2 kPower-made two-line variant.

kPower will trade its original Dave Culp OL for a Norway wreckage Makani logo wingtip. This is a good deal for all Europe. Otherwise, Google controls the inventory, and there are a few here and there, including a few large ones the Kiwis had to buy over the America’s Cup kite-scare. They ended up just banning the thing, as the Cup defender gets to set rules.

Some videos about KiteShip and OL:

and a 1m2 kPower-made two-line variant.

Dave, could kPower test it in crosswind reversible mode?

Its just not the right kite, because it “pops” (opening shock) each time it inverts. kPower instead recommends gybing smoothly like a spinnaker does, trading LE and TE sides.

KiteLab Ilwaco has already tested these modes over many years, including gybing spinnakers under pilot-lifters, as shared on the Old Forum. Let anyone confirm these simple results for themselves.

@kitefreak,
Does the distance between the two anchors allow more scaling, as seems to be the case for Mothra (Peter Lynn mentions the difficulty to scale even for a soft kite, but multi-anchoring is not considered) ?

Peter Lynn is specifically talking about single-line kites, not multi-line/multi-anchor kites, but he does use tag-lines when needed. His style is to claim “does not scale”, or cry “hard”, but then succeed anyway, holding the world’s top kite scaling records. Funny guy!

Soft kites and networks surely can scale to km2 and beyond, for lack of any fundamental scaling limit. There is a sort of practical limit to how big a kite can be handled on the ground without tearing thin fabric, but surface blowers might fluidize handling, and mega-kites could be floated to rise from water.

A mothra type can be very fractal,
In the pics & videos you’ve seen, as done by @kitefreak
where you see patches of tarp, each one of those could be replaced with a Mothra, a stretched shared loadpath with patches on it.
So launching a huge scale device could be a stepwise process maybe working from the centre set outwards

Mothra has been formally defined as a soft-cellular “metakite” whose modular cell panels are “kixels”. The overall bird-like (or moth-like) form is not truely fractal (self-similar) from sub- to meta-scale, excepting rectilinear kixels set in their loadpath grids act much as ripstop fabric subscale.

Assembly aloft is predicted as the ultimate scaling method, eliminating ground-handling limitations. Popping kixels and kites open from packs, like parachutes, is another prime method.
To the extent these methods do not have close prior art in AWE, they are claimed in the Open-AWE_IP-Cloud.

Here is a variant of a yoyo arch on a rope-ring: 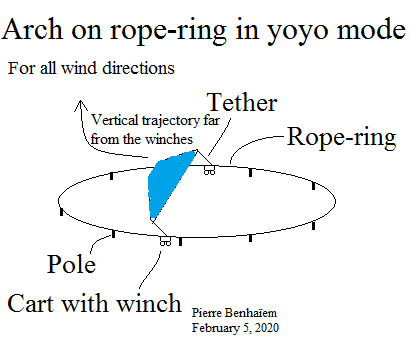 The vertical trajectory could allow the use of a larger kite. I do not know if really the double anchoring allows the implementation of a larger kite arch. Please what do you think @kitefreak?

There is no looming scaling barrier to a circular cableway operating an AWES below 600m regulatory ceiling. Attractive COTS hardware is standard cableway elements operating upside-down.

Cableway use in AWE is a major Old Forum topic, with hundreds of posts. Fortunately, the old postings were never obstructed for “breaking the rules” the New Forum imposes, that you complain my posting somehow does.

Dave,
Do you know if really the double anchoring allows the implementation of a larger kite arch?

No. Let it be tested.

I guess simple anchors with industrial belay will win by scale and capital cost. KIS.