Testing at night.
Looks to me like the down stroke is taking about 5/8 or less time than the up stroke, depending on course and wind etc

Do we have a test video category? 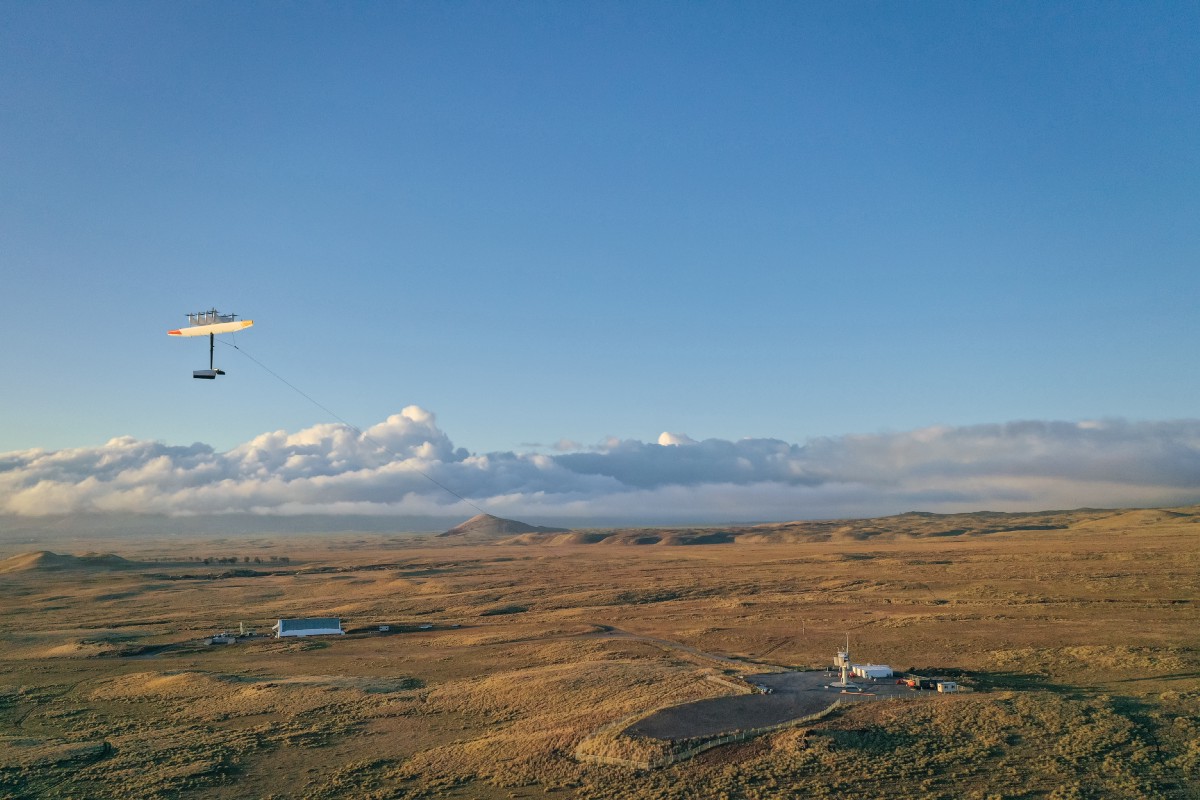 Since our first flights at our Hawai’i Island site in 2018, we’ve been steadily testing our energy kite in the island’s strong winds. Flight testing is how we gather the data and real world experience necessary to validate our models and confirm that our airborne wind power system is on the path to commercialization.

Our name, Makani celebrates Hawai’i’s incredible wind resource, as well as Hawai’i’s leadership in promoting sustainability and energy independence. Some of our first power-generating prototypes were tested on Maui in 2008, and it is a privilege to now test our kites on Hawai’i Island.

We’re excited to share a few videos from some of our flights earlier this year. 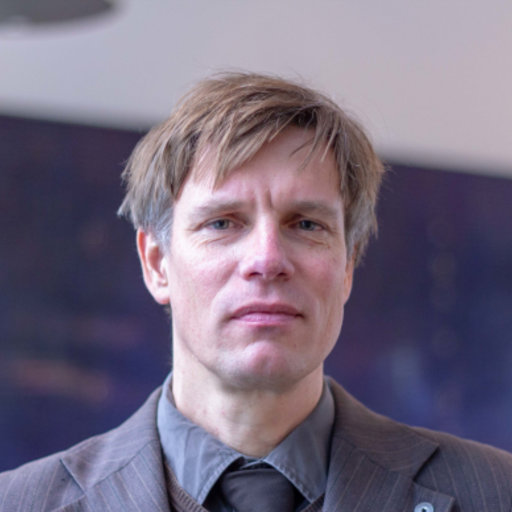 Yeah this is scary. What are the numbers? Rotor TSR? Noise level?
If it flies at 60 MPH, with a TSR of 6, you’d be listening to 360 MPH blades.
Or 90 MPH with a TSR of 4.
Looks like they went to 5-blade rotors to lower the TSR.
How do you get paid? “Just the tips!”
For this “Just the tip”, I’m counting 42 tips, or 50 if you include the pylons with nacelles.
By the way, steel towers are not that expensive, considering their useful life.

Clarification: 360 MPH blades result by flying at 90 MPH with a TSR of 4.
Regarding efficiency:

I scissored this tweet by @Rodread (hope you dont mind):

I usually refer to this as gravitational slowdown. Its a real issue for heavy kites (eg not made if fabric) in particular, and mostly at the lower wind speeds.

I assume (though of course this is pure guesswork) that Makani will decrease power production in the upstroke to counteract this effect, and possibly also opposite in the downstroke. The problem with this is of course uneven power delivery and not being able to «fill» the power transfer potential of the cable during a loop.

Due to this possibility, it doesnt make sense to observe gravity slowdown in a video, because you dont have the numbers for the harvesting drag force. Or you could of course estimate the power harvesting if you had thw weight and polar curves and such of the rig (which I dont have).

The same effect would be for kitemill/ampyx style lift mode generation by slowing down the reelout speed. The effect is also similar in that the full power transfer of the tether (mechanical in this case) may not be utilized.

So this is not specific to Makani/drag mode rigs.

There are a few ways around this but I wont go into details, and they are generally not that good looking from my point of view.

I can also add that gravity slowdown probably gets worse with larger looping radii (which is probably a prerequisite for scaling a rig like Makani’s). I might mention some of this if I get to present something at the AWEC conference… otherwise feel free to start a new thead to discuss this in particular.

Can we even be sure it’s generating ~9 o’clock in the path?
The wind looked strong.

A Mechanical drag mode network with multiple small wings doesn’t have any noticeable gravitational slowdown. (there is a slight skewing slewing effect on fixed blades which is kinda analogous) smooth rotary power on the ground is what you get. Can’t wait to see mech drag experiments with much higher wing counts and larger radius.

Its true. Multi kite networks is the most obvious solution to gravity slowdown. But multi kite networks are not easy for most architectures… so either bite the bullet and accept variable power… or… it’s a «challenge» anyways…

For a network of three kites you will not get skewing, so that number would be my bet for an optimal number of blades in such a rig (sorry @Rodread). Excited to see what the future will bring on this subject

Also when you say «can’t wait for larger radius» I expect you are referring to the Daisy not Makani’s wing. The Makani radius seems quite large as it is. I would think they would rather work to reduce the radius (pure speculation again) in order to make better use of ground space and cut infrastructure costs.

The kite network could solve that as well, as centrifugal forces will be very large for them.

Anyways, It seems Makani is well positioned to launch two or three of these «bad guys» and connect them to a single tether, solving all these issues and enabling very high altitude. Even if they go this route, radius should be reduced to get a better solidity factor imho

It looks that the secondary turbines are far too large due to E-VTOL requirement. So their thrust coefficient should be lower during generation to avoid slowdown. But that is only a hypothesis.

So their thrust coefficient

And it seems they’ve done sea trials too 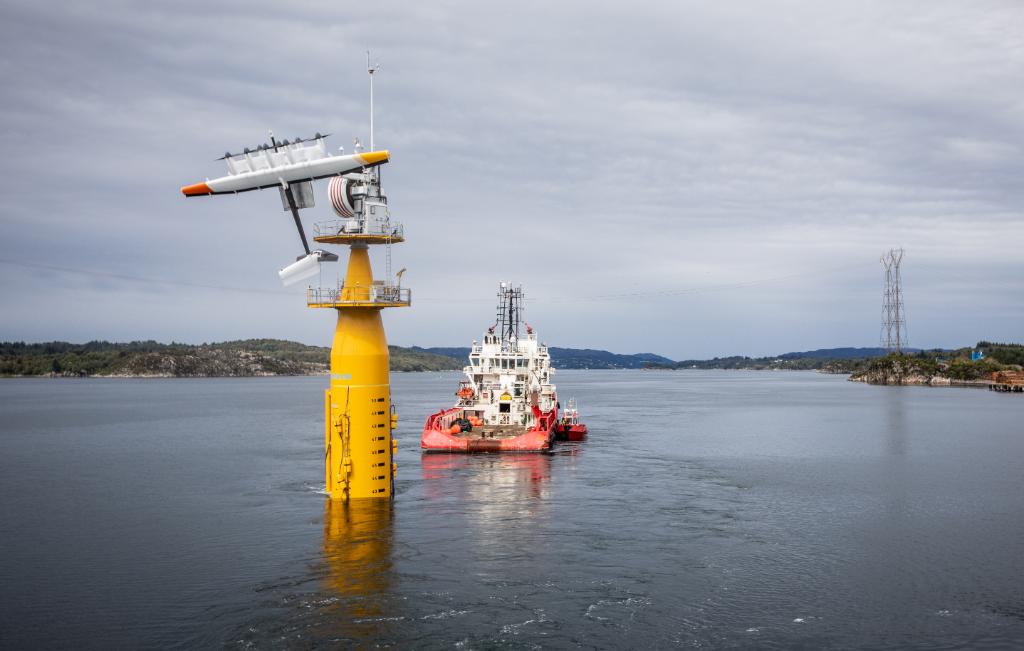 New technology at sea ⚡ Our partners at Makani have completed the first offshore flight with their energy kite. More here: https://t.co/VZh7GltO85
1 Like
dougselsam August 15, 2019, 4:40pm #14

Our partners at Makani have completed the first offshore flight with their energy kite.

I’m flattered that it appears they’re using my now-patented floating foundation design, disclosed in my European patent, Figs 14-20:
https://patents.google.com/patent/EP1407139B1
In the U.S. We have a new patent with claims directed toward such a turbine/tower/anchor/power-cable/floating-foundation combination:
U.S. Patent 10,024,307 Floating Marine Wind Turbine
https://www.windpowerengineering.com/design/floating-turbines/new-u-s-patent-granted-for-floating-marine-wind-turbine/
https://nawindpower.com/new-u-s-patent-awarded-for-floating-offshore-wind-turbines
How long before they want to use my whole invention, rather than just my floating foundation?

Also when you say «can’t wait for larger radius» I expect you are referring to the Daisy not Makani’s wing.

When Daisy’s diameter will encounter the loop’s diameter of Makani’s wing, and vice versa, a step will have been taken.