Doug,
I would appreciate your opinion of using a tower to support parachutes, autorotating turbines or your Skyserpent. Their efficiency is best when the tether angle is low. In the case of the Skyserpent, you can tolerate heavier torque tubes between turbines.

Rod,
Why can’t you use the tower to support your Daisy system? Continuous tension in the tether will ensure that the system will not hockle when the wind dies. Perhaps you can redesign the tensegrity system based on this fact. Having a constant tether angle simplifies the power takeoff.

I’m planning to have another mast mount test within the next couple of weeks.
This is purely for research purposes and mast mounting is definitely not my long term intention.
Sure, great for a clean wind day. Great for holding a low elevation angle in low wind. (hockling shouldn’t be a problem any more with good ring and spacing geometry ratios)
In this case it is going to be good, purely for the sake of clean rotor performance data collection.

Doug,
I would appreciate your opinion of using a tower to support parachutes, autorotating turbines or your Skyserpent.

Hi Gordon: What I’ve observed is the process of inventing in wind energy usually turns out to be the inventor slowly figuring out why all useful wind turbines look similar, and that the only “improvement” their invention needs is to get rid of every feature that defines it, until they arrive back at the standard design from their roundabout path to get to what is already known, like Dorothy from the Wizard of Oz realizing “there’s no place like home”. Like “The only thing wrong with my airborne system is the “airborne” part.” Or “The only thing wrong with the parachute idea is the parachutes”. This is why I encourage kite-reelers to examine how their system would look as a ground-based or tower-supported system, such as a towered wind turbine on wheels, running unloaded, pulling cables downwind along the ground, then being reeled back upwind again - whacky. It’s like with so many ideas people run by me, “the only thing wrong with your invention is its main features, otherwise it looks great!” Yes I think towers and landforms are both great ways to elevate any wind energy system. Of course most wind energy inventors never get to any truly workable or useful system at all. One factor that I realized long ago is the lack of even a decent product, until you get up to commercial-scale machines. The odds of having a good experience with even the “best” small wind systems is very low. They cost many times what they are worth in output. They break down a lot and have a lot of problems. Most do not deliver the expected power. Improving wind energy is not the easy “slam-dunk” many outsiders and neophytes assume.

Hi Doug, it is well seen! But this could also apply to SuperTurbine ™

Yeah Pierre, how do you think I know all this? I’ve taken my turbine designs full-circle, going through several multirotor designs, all the way back around to the standard side-furling concept with a gravity-tail, to many single-rotor versions, seeing how they make power and most importantly, survive high winds. We have a large collection of burned-out stators, for example. It took several years, and much trial-and-error, to get even just one model fine-tuned to survive storms without burning out. It’s all about limiting output. I’ve found many valid niches and configurations within this spectrum. One, as I have mentioned, has been running for something like 9 years now, with one blade replacement a few years ago, with no generator burnouts and no bearing failures. The reason ST designs have success and promise is they do not try to reinvent everything, and do not throw away 2000 years+ of knowledge, but rather use the knowledge to get to some next-step workable configurations. My designs go mostly forwards, not backwards. However, there are factors lately I’ve been realizing point toward some of my earlier concepts having more potential survivability than the ones that veer back more toward the standard design. You don’t really know what you’re dealing with until you’ve had a given model running long enough to experience all sorts of conditions, especially strong winds, gusty winds, turbulence, and sustained high winds which can go on for hour after hour, slowly cooking your windings. You can’t know if a given model is good until you’ve had many operating, for years, in many locations. This is why people testing a model designed from their desk, in a wind tunnel for a few minutes, are usually delusional. Making good power is not that hard, it’s controlling it that is difficult. Imagine your assignment is to develop a better formula-1 race car to compete with the top designs in the world: As I’ve pointed out, most people show up with a wheelbarrow. Assuming you even know how to make a machine with good suspension, steering, power, etc. you have to make sure you will not be the next Dale Earnhardt and hit the wall at high speed. You need failure avoidance. Your race car needs good handling, suspension, steering, and good brakes to match the power of its engine. All that is probably more important that how much power it makes. I think of wind energy systems as sophisticated, automated aircraft. Every engine has a throttle for instance, because if it is powerful, you need a way to control that immense power. You can’t just say “It’s always floored!” You will crash. You will “hit the wall”. My repeated quote: "Overspeed protection: It’s not the main thing, it’s the ONLY thing.

My repeated quote: "Overspeed protection: It’s not the main thing, it’s the ONLY thing.

Sure, but generally AWE prototypes are tested during only some hours, so overspeed protection cannot be examined.

Beside this the Serpentine could be a suitable AWE option if the shaft was a tether. But for what I saw the transfer with the tether is not good. The rotors turn but transmit little torque with a tether. But perhaps my tether was not suitable.

Doug do you remember how much power did you obtain with your Serpentine with a tether as shaft on the video below?

Sure, but generally AWE prototypes are tested during only some hours, so overspeed protection cannot be examined.

Yeah after a billion dollars spent, and thousands of people having group photos taken, there’s still not one AWE machine running on a daily basis yet. How is this possible? Mass delusion?

Doug do you remember how much power did you obtain with your Serpentine with a tether as shaft on the video below?

Never measured. I was mostly just goofing around, with that machine, and in that video.

Managed to run a mast mount 6 blade ring rotor test today.
Ran well for just over 10 mins before I was careless with braking and crushed the shaft.
Kinda lucky I did, there was a powercut here just after and data which was saved just in time would otherwise have been lost.

The data will be run through thoroughly by @Ollie before publishing.
Control algorithm ramped up the current really well. Chuffed with that…
Just wish I’d used it better for slowing the rotor down…doh.

The ring took a crash spectacularly well (all blades and fuselages fine after ground strike at ~85+rpm) as I had left the fuselages loos-ish on the ring.

The really exciting thing today was the use of GOLD Duck Tape
Aye Aye POSH
And if you see the video…yes I should have had a helmet. A mini mohawk hairdo, although it looks hardy, isn’t going to be enough in a worst case.

Fun day out (in lockdown on the croft)

Networked Arch kites are very simple kite forms, they can generate huge lift forces, but are hard to rotate, elevate and keep tuned in a turbulent wind. They can fair gallop too.
I made this one from old windsurfer sails today for some lockdown entertainment… 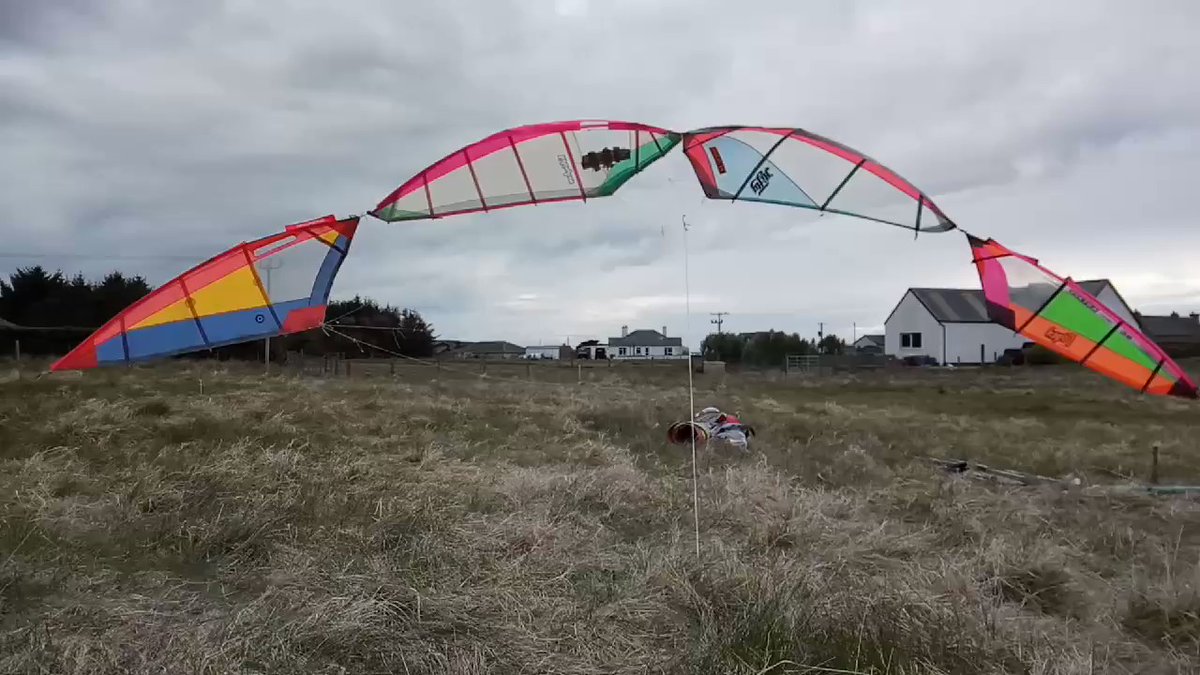 If you have old windsurfing sails lying around doing nothing, you can make an arch kite. https://t.co/nahrKldBvY

I used a forward guide line instead of having pure leading edge span load tension to help hold the form… I probably needed a bit more tension on the undersides to hold it without the forward (upwind) tether.
gordon_sp May 1, 2020, 12:59pm #31

How do you erect the system with the mast? Do you lift the mast with the Daisy attached, or lift with a pulley?
What is the tether angle with the mast?
If the wind dies and starts up again, will the system automatically restart?

Hi Gordon, The rotor was hoisted from a pulley tied up to the mast head.
The hoisting line was attached to a 12kg Bucket … The bucket was occasionally lifted as things changed. The hoist to the mast had the shaft up to about 24 degrees elevation from the ground.
With 6 blades at 4 deg to the rotor plane the system does not need spun up to start.
The controller reacts to change torque load as conditions require.