What are some ideas to make tethers more noticable in the day, and especially at night?

Bat Conservation International was founded in Austin, Texas, where kPower is based, so we have a particular interest in the Bat, as “Bat Capital of the World”.

Environmental assessment of the location…

How about when we have a flashing light on a looping AWES…
Does it have to be a regularly timed flash or…
Having the majority of light flash visibility above the top surface of the AWES and only at the top point of the loop… This would likely have no effect on the ability for air traffic to spot the kite yet would also reduce the impact on dark sky environmental enjoyment on the ground.

There needs to be continuous conspicuity for looping kites, not just the deceptive illusion of a top station-point. The novel danger is aerobatic trajectory where the unit dives at high speed into another altitude-airspace. Hard for birds to adapt as well. Blame the design not the victim. Its harder to design a beacon that only flashes at zenith.

Also, Kitepower’s recent breakaway dragged a tether in Valkenburg that was apparently charcoal grey, perhaps the least visible (but most fashionable) color in the Netherlands. Best practice going forward, especially for single-line AWES, is high-visibility tether colors, for less danger when dropped/dragged across roadways, etc. See Old Forum for more. 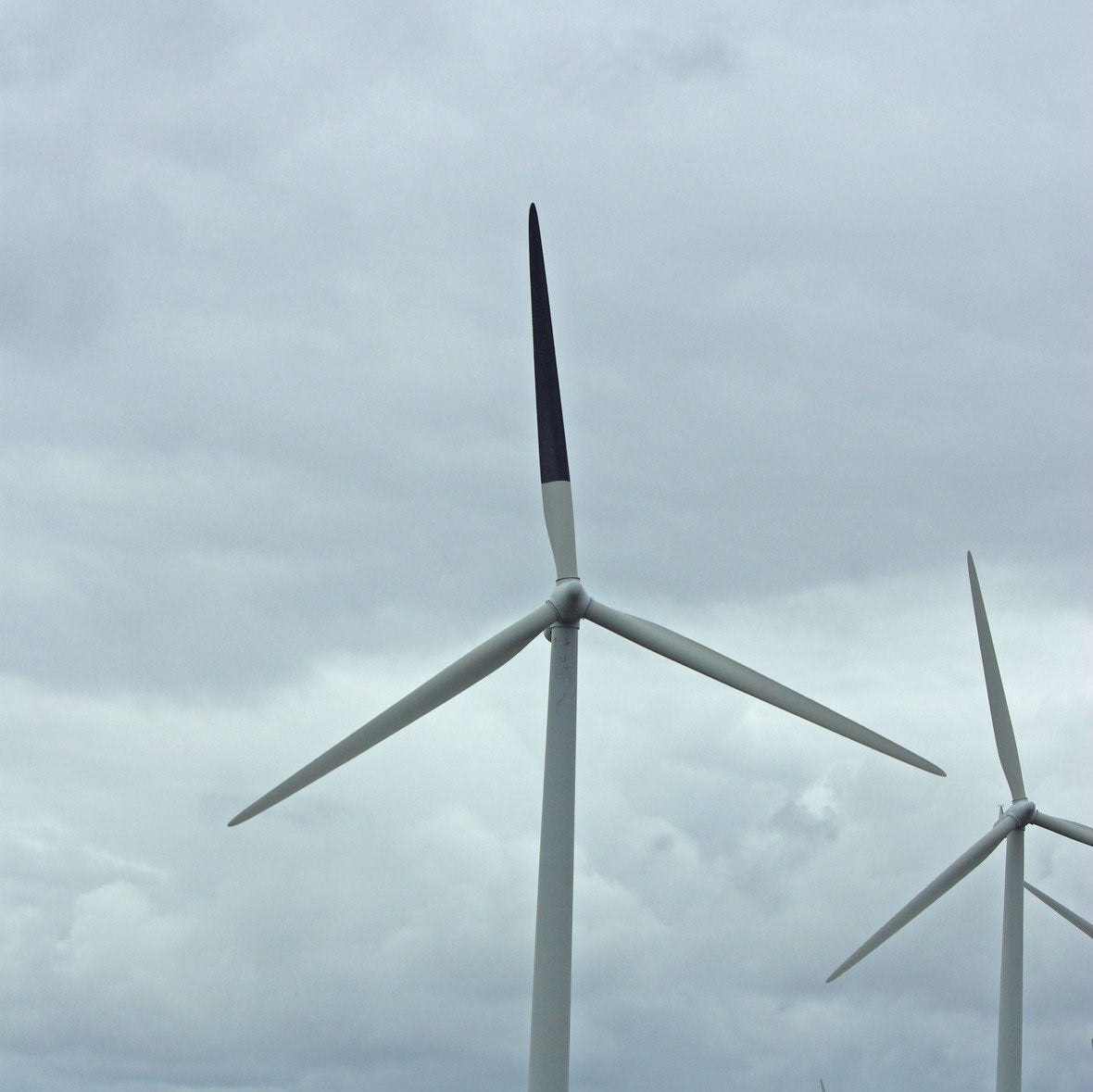 A recently published research article finally provides evidence that painting a single wind turbine blade black reduces collision by 70%, and is particularly effective for large birds of prey, and therefore probably also vultures. The paper was published in Ecology and Evolution by researchers from the Norwegian Institute for Nature Research, Norway, and the Lake Ånnsjön Bird Observatory, Duved, Sweden.

If you check out the actual study: 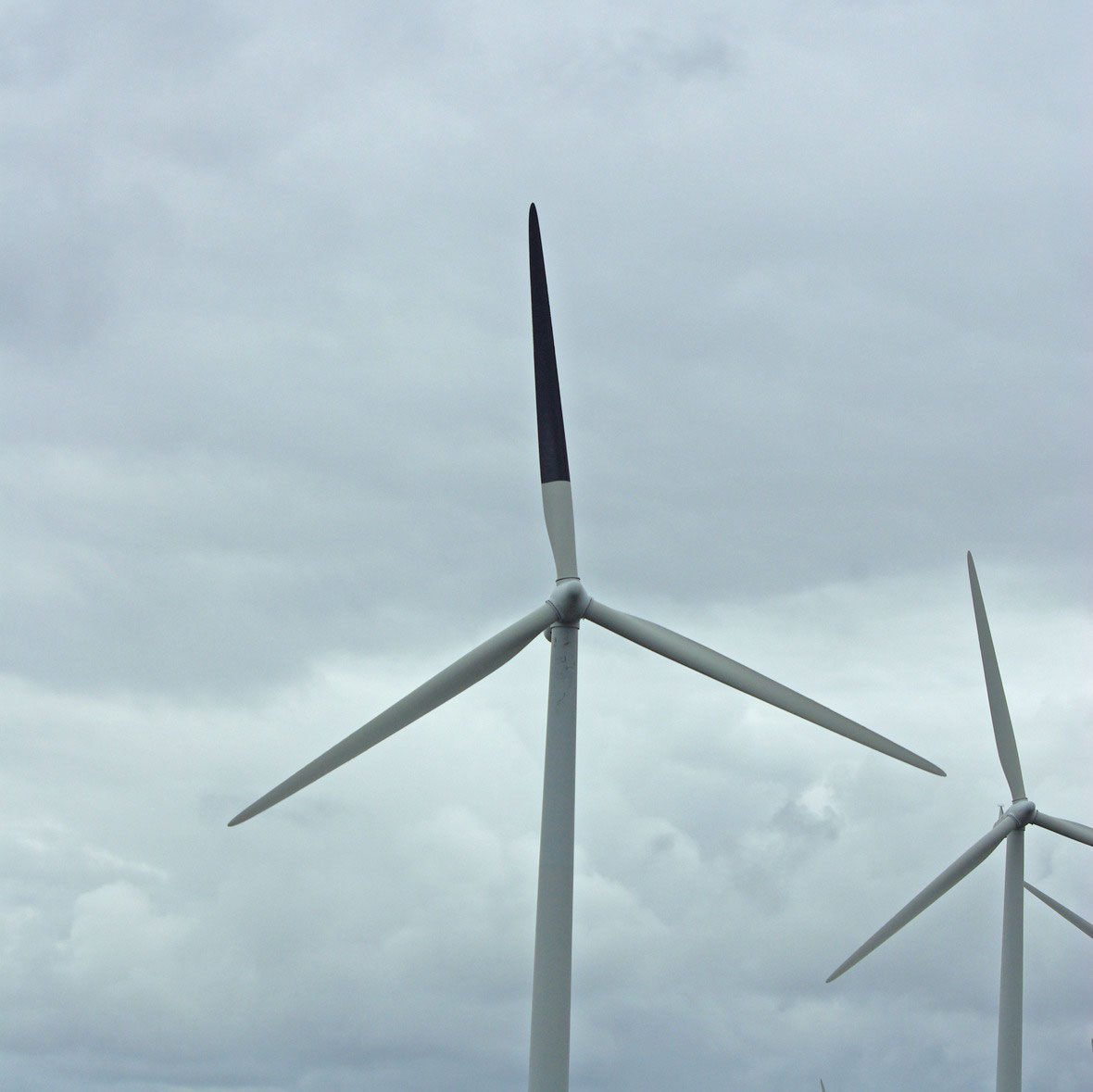 A recently published research article finally provides evidence that painting a single wind turbine blade black reduces collision by 70%, and is particularly effective for large birds of prey, and therefore probably also vultures. The paper was...


Collisions greatly increased at the (control) turbines without the black paint, and stayed about the same at the turbines with the black paint. Looks to me like strikes about doubled overall after applying the paint. Am I missing something there? Check the color-coded seasonality, and it looks like there were so few data points that the results might be statistically meaningless. For example, after the paint was applied to a few select blades, there were zero winter hits on any turbine???. But double the overall strikes? And double the strikes is good? hmmm…
Note: It is mostly only in cold places like Norway that blades are sometimes painted black, and the reason is to shed ice. Otherwise black paint can cause heat damage to the blades in places like Palm Springs with their thousands of turbines, full-sun, full-time, and 120 degree F. temps in the summer.
1 Like
Windy_Skies August 14, 2020, 8:30pm #29

I think if you only read one thing from most studies in areas that you’re not familiar with, it probably should be the introduction. There the researchers give a summary of recent research in the field and why they think this study was necessary. I learned several somethings from the introduction from this study. For example:

Relative to humans, birds have a narrow binocular frontal field of view and likely use their monocular and high‐resolution lateral fields of view for detecting predators, conspecifics, and prey (Martin, 2011). Within an assumed open airspace, birds may therefore not always perceive obstructions ahead thereby enhancing the risk of collision. To reduce collision susceptibility, provision of “passive” visual cues may enhance the visibility of the rotor blades enabling birds to take evasive action in due time. Experimental laboratory studies have indicated that painting one of the rotor blades black may help to decrease motion smear (Hodos, 2003). He tested the potential effect of seven blade patterns (striped, staggers, whole black), as well as colored blades, on the retinal‐image velocity (as a measure for the relative visibility above blank rotor blades) in American kestrels ( Falco sparverius ) in a laboratory setting. Hodos (2003) recommended further field tests with a single‐blade, solid black pattern to determine its efficacy in reducing fatalities as that pattern resulted in the largest effect in reducing motion smear. Motion smear patterns that appear to be “moving” may increase its efficacy and reduce habituation, as the frontal vision in birds may be more tuned for the detection of movement (Martin, 2011).

So an increase at the control site and a decrease at the impact site. There are very few data points though, so the confidence intervals are wide.

Or in a diagram: 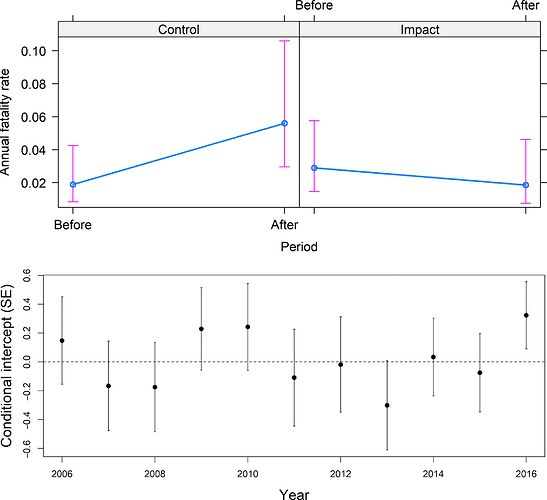 The study gives some background info and some data. The reddit thread also has some discussion.

I think the study gives enough info to make decisions about painting your turbines. If I wanted to know more about this, my first idea would be to follow up the references and then try to increase data points, and go for more direct measurement. I don’t think their proposals for further study are very imaginative. Instead of looking for carcasses perhaps I’d try to visualize every bird encounter as a colored point, or path, in 3d space, color coded according to vector difference and distance between bird and blade, if that hasn’t already been done in previous research. Perhaps that would allow you to see hits, close calls, and flying behavior of the birds (and bats) around the turbine.

EL wire, or fibre optic wire will work for nighttime (but EL wire has a limited lifetime). But i think in daytime there will not be enough light for it to be visible.

Is it not possible to just make a “no-fly zone”?