What can we do with enough kite?

A question I like is. What can we do with enough kite?
Currently working on a network sketch with enough kite to replace jet plane transport using patterned deployment of rotor drives clamped with ropeway rollers to transport band layers. Quite a network.
Some very messy sketching… 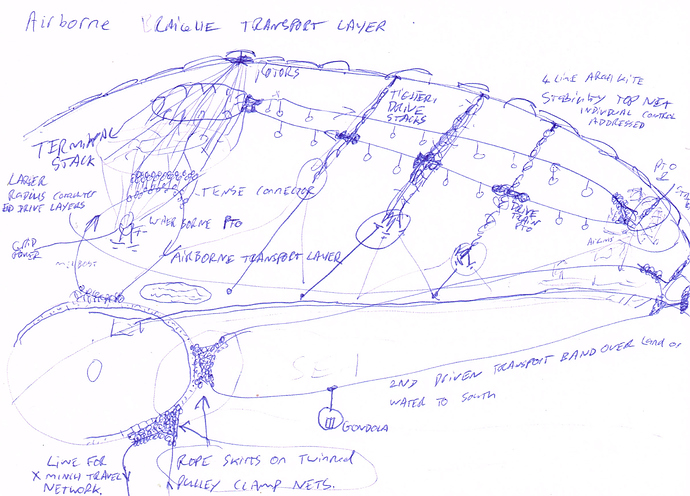 Wow that’s a change of scale.^^ Reminds me of this:

I don’t quite understand the sketch, but judging from what I got, I don’t think it is a viable idea as is.
Is the bridge at airliner cruising altutude? If not, air drag is too much for fast travel unless you hoist a vacuum tube. I don’t think you’ve properly considered the speed of airliners at 294.98 m/s
Is the idea to skip wings and turbines to have a more aerodynamic vehicle?
Airliners use most of the fuel to get to cruising altitude. That’s where kites could be useful, I think. Build a dynamic structure for pulling the aircraft up to an altitude where kites stop being useful. Simplest way I can imagine is just pulling it on a rope but maybe something like a maglev trolley or something will turn out to be better. Aircraft height is about 10km up and jet streams are at about the same altitude.

@Tom
Without having watched that video series. I suspect kite networks are less work and depend on many fewer unknown magic processes.

Again no apologies for the scale of my proposals.

The precursor to bothering to work on Airborne Wind Energy is realising we HAVE TO STOP burning HUGE amounts of carbon for our energy. The carbon energy stream is massive. The scope for replacement is massive. The need is ever more urgent. We are failing to even lower let alone reduce global CO2 emissions.

We’re engineers, our job is miracles, from vapor, on shoestring budgets.

Your forum topic here is Thinking, Rationality, being less wrong.

I really insist nobody use my sketches “as is” Starting at… yes lets say 10km alt = nuts.
Start small build up. So we at least have some data to work from.
A neater more elegantly efficient patterning will emerge.

Starting at 294.98m/s is nuts… or is it? Looking at the 2 x undersides of the bridge shown…
All you need (“all you need to do” grand claim alert) to do… is add a carriage onto one track outbound one back. You can drive a band line using kite turbines or even drive carriages using their own under-flying (pulling the bridge down) speedy kite.

The amount of energy to drive a carriage on the band (The equivalent energy of a bunch of jet engines) Should definitely be within the scope and scale of Airborne Wind Energy - Otherwise, we give up and find another solution!

The messy pen sketch is 3 terminal nodes (larger radius turbine at the root), 3 gondola lines (1 between each node) A support layer and 3 driving turbines on the far transport loop. It’s not an ideal configuration it’s a concept sketch. It’s drawn above a road which was closed in storms by police today forcing me to be late.
Nodes are meshable, kite networks are meshable, they can be integrated into larger networks, they can scale.

I moved this discussion to a new topic. Disagree (on how I did that) or have comments? Send me a pm or leave a comment in one of the threads in the feedback category.

Another Idea I like for continuous rope traction (upward, or other) is compounding Daisy sets to work in and under spider web lifting net formations. Each Daisy feeding either planar and or cross planar sheeves and clutches. Promoting driven bands across chosen line directions of its lattice node.
You’d want to explore the weight of a decoupling power linkage mechanisms, used for Transferring power from clamped trolley wheelsets, turned by neighbouring loops. As per ropeway working, Netted interlinked rib blocks, mounting bands of inline sheeve pair sets, could hold a moving rope tightly inline with the plane of a similarly tensioned, neighbouring, fixed or moving line.
With this method I suspect groups of rotary net output can be stabilised by their power take off device.
The problems of handling such very movable bands of rope are not going to be easy to calculate or manage. But they should be a much leaner energy sourcing.
Would a drawing help?