It’s a matter of geometry. The amount of tension applied to the tether vs the kite pull vs the speed of the line on the reel… I challenge anyone to put forth a probable calculation for a working design. Then start discussing soft vs rigid etc.

The calculation could assume the kite pulls with any force, then describe the geometry of the triangle and how fast the kite needs to fly in order to generate x kW…

In yoyo mode, the pulling force is converted in energy, unlike (at least partially) Figure 5 configuration.

Let us analyse a bit what we see on the video below (also from kPower LLC filing), just after the indications:

The skateboard is a true COTS TRL9 regen EV that weighs ~25kg and takes quite a bit force to move in turf. The kite is a COTS TRL9 1.8m2 toy […]

If we see carefully the system during these 9 seconds in full screen and with stops, we can see the two anchored pulleys at the left and right to the skateboard, and the triangular rope sliding during the flight and moving it.

So, Figure 5 has therefore been made and shown on the video above.

My point being that the pull difference along with the speed of the two tethers must be enough to produce sensible amounts of energy, without demanding a very thick tether with lots of drag to do so… I think to comment one would have to describe an experiment like I suggested 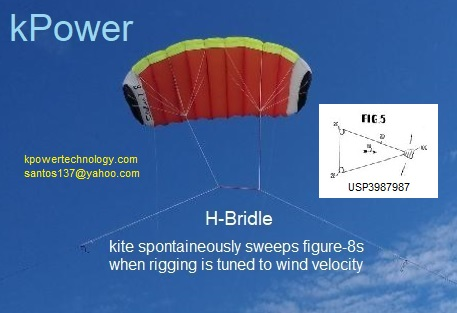 These horrendous old animated sketches give a modest idea of what was intended in these schemes.
Recommended 2x speed watching


Shows a kite control bar with 3 pulleys on one side of a field, controlling a kite on a line loop.
The single loop trifurcates into the 3 pulleys on the left hand side (looking from upwind)
The loop goes round a capstan/pulley on a generator ground-station at the right hand end .

It was better than this earlier one

I tried rigging a bit of collective panel/sheet steering to mimic the physical action needed for this… eugh yuck it’s a sticky affair.

The useful energy of any AWES is that which rotates the generator. I do not think the figure 5 describes a favorable configuration. The problem of tether drag comes later if it occurs. The reeling (yoyo) mode looks to be far more efficient as the pull of the kite is fully used, unlike the device represented on the figure 5.

Let us compare the two videos of 9’’ each from Random interesting links and from kPower LLC filing :


The first video shows how the pull of the kite moves the cart in its direction (as for the yoyo mode, the reeling replacing the move of the cart), while the second video (figure 5) shows how the pull of the kites remains mainly in the tether. As a result the power is better applied on the device represented in the first video, and this is very visible in spite of no use of crosswind power.

It is not an affair of such a sort of wing, nor drag vs lift, nor tether drag. It is how the pulling force is applied to make power, as I explained on my last three messages, the videos allowing to better understand.

No matter how you look at this, the energy depends only on the pull of the tether and the speed of tether travel. If you have more than one tether, you must sum the power of each tether. So fig5 is no different from Yoyo in this respect, though fig5 is mostly(/purely?) a drag mode AWE.

If you have more than one tether, you must sum the power of each tether.

A general lack of transmitted pulling force occurs by using two anchored tethers simultaneously, as for figure 5, and also for figure 1 a and figure 1 b, leading to a partial cancellation of the tangential force that rotates the system. 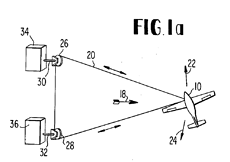 It is the reason why I studied a lever transmission when the tether is perpendicular to the lever in order to maximize the tangential force that rotates the lever. See the video below where the two tethers work alternatively.

In fact the same power transmission would be obtained by using two coupled yoyo rigs.

though fig5 is mostly(/purely?) a drag mode AWE

In some way that can be correct, but the problem is that the energy is not taken on the wing but on the ground, with the lack of useful transmitted force I mentioned.

The two videos that I juxtaposed in a previous post only confirm visually the analyzes that I provided during my last messages.

As conclusion the systems represented on the figures 5, 1 a and 1 b are less efficient as the yoyo mode.

Fig5 is a normal drag mode rig. It should fly at 2/3 the speed it would unloaded. In order for this to happen the angle from the rear line must be at an angle to account for this and for the glide number of the kite+tether. I believe the triangle cant be very tall for this, I would very much like to see some real numbers for this.

If the tension of the two tether is more balanced, eg. ratio 1:2, the triangle must be even lower.

So anyone promoting this idea, please start with these numbers, otherwise there’s really no point in proceeding. The numbers are not clear at least to me.

The geometry of the triangle will definitively affect the usefulness of the patent, as you need also to account for changing wind directions.

We must also consider that some tether strength is wasted, and double tether will cause significant added drag for some altitude of operation. Actually I think all the pull in the front tether is more or less wasted.

Finally the pulleys add some friction, relative to the amount of tether pull wasted.

The reason that I wrote “mostly” pure drag is the fact that the distance from the pulley line to the kite is changing quite significantly during the sweep, if the triangle is wide. So the kite will not be moving entirely linearily, but rather at faster and slower speeds.

I am not saying this idea is good or bad, but unless someone calculate these things for me, its just too much hassle to look into. Perhaps I might anyways later…

After taking a look on the figure 5, I can state it leads to an inefficient device, even without taking account of its unsuitability for changes in wind direction. As I detailed on my analysis the kite pull mainly acts to stretch the tethers, and only a little to rotate the generator system. So making calculations is not needed.

Just how related is the triplet tether to the seed of Fig. 5 is an exploration of itself?

Quoted:
“4. Discussion & Outlook
It has been shown that:
3r is comparable in terms of power output.
3r makes it possible to have a kite with constant angle of attack.
3r makes it possible to land and start the kites without additional equipment.
3r makes it possible to keep the kite airborne when no wind is present.
A key feature of 3r could be a constant power production which could be achieved by steering the distance motor-generator accordingly while keeping a closed trajectory. An optimization achieving this would proof the value of this new concept. To increase the precision of the evaluation, acceleration forces based on the trajectory should be included and whole trajectory optimizations should be done.”

When in a Fig.-5 AWES the loop segment that slackens might be considered during that slack as a non-tether, but line laundry with its mass and drag; the active wing set and taut working line parts tether the wing set and lifts the mass of the slack line. The line laundry drag and mass will combine to add tautness to the working non-slack tether. Suppose one could magically periodically fully delete the slack section; the working wing would still be just itself, though be flying a bit higher. But we do not do that magic deletion; we just let the slack section lower the altitude of the wing set a bit.

Flying the wing set in cross-wind cycles and having PTO at the ground seems to keep the system a lift-based AWES.

Good news: Looks like the team is onto a build project for 3r.
https://www.researchgate.net/project/3r-Airborne-Wind-Energy

I provided this link on Tri-Anchor Tri-Tether AWES Unit-Cell. The geometries of the AWES represented on the figure 5 and the tri-tether AWES are different I think.

I’d be happy to see some of these ideas be built and run.

Is that an endorsement, @dougselsam?

When in a Fig.-5 AWES the loop segment that slackens might be considered during that slack as a non-tether, but line laundry with its mass and drag; the active wing set and taut working line parts tether the wing set and lifts the mass of the slack line.

I think the tether network anchored in 2 points (figures above) or 3 points (tri-tether) acts simultaneously on these points, all lines composing the tether network being connected. As a result a significant part of the force is an useless parasitic force.

FIG. 1b describes a lever with a strand stretched at each end, and which can be easily tested: the pull on the rope and its perpendicular move to said pull will have a minimal effect on the rotation of the lever. This is the reason why only one strand is in action on OrthoKiteBunch, the other being slacked. But that supposes an active control on each of the two winches respectively located at the two ends of the lever, and therefore more complexity.