For years it’s been HAWP on Wikipedia despite several attempts at changing the description.
Airborne wind energy hardly makes an appearance on Wikipedia.
Big shame, big missed opportunity… and wrong.
I’ve taken another shot at editing the HAWP page…

High-altitude wind power (HAWP) is the harnessing of the power of winds high in the sky by use of tether and cable technology. An atlas of the high-altitude wind power resource has been prepared for all points on Earth. A similar atlas of global assessment was developed at Joby Energy. The results were presented at the first annual Airborne Wind Energy Conference held at Stanford University by Airborne Wind Energy Consortium. Research and HAWP businesses more commonly refer to the term Airborne...

Had a look at your edits:

High-altitude wind power (HAWP) is the harnessing of the power of winds high in the sky by use of tether and cable technology. An atlas of the high-altitude wind power resource has been prepared for all points on Earth. A similar atlas of global assessment was developed at Joby Energy. The results were presented at the first annual Airborne Wind Energy Conference held at Stanford University by Airborne Wind Energy Consortium. Research and HAWP businesses more commonly refer to the term Airborne...


I don’t think we should change the definition of HAWP.
I’m unsure, but I think the term and acronym are used to relate to very high wind turbines as well.
It’s very similar to HAWT which can stand for horizontal axis wind turbine. Let’s just use the term Airborne wind energy and give that a useful definition. It’s established. “HIGH altitude” doesn’t have a clear definition.
There’s also this article: 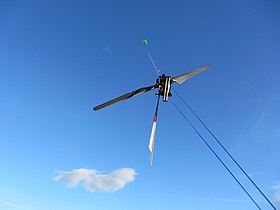 An airborne wind turbine is a design concept for a wind turbine with a rotor supported in the air without a tower, thus benefiting from more mechanical and aerodynamic options, the higher velocity and persistence of wind at high altitudes, while avoiding the expense of tower construction, or the need for slip rings or yaw mechanism. An electrical generator may be on the ground or airborne. Challenges include safely suspending and maintaining turbines hundreds of meters off the ground in hig Airbo...

For myself I’m just going to collect the information, structure and publish it, before trying to mirror that on wikipedia, where appropriate. Easier to start with a blank slate, which I have full control over.

I’m sure that people have previously tried to add a page Airborne Wind Energy… which was subsumed by overzealous editing by those in favour of this unused HAWP pish.

Not that I’m an huge fan (yes my designs are huge fans… ho ho ho) … of the acronym AWES … as we discussed in the acronyms part of this forum.

Wikipedia is the default go to authority

Absolutely agree.
Anecdote: I’ve named the twitter account something with HAWP because that’s the name that wikipedia used.

The best thing to do is to write a stub article and expand on it over time and remove the redirect to HAWP from https://en.wikipedia.org/w/index.php?title=Airborne_wind_energy&action=history That redirect was put there in 2009. You can amply argue your case now that it can be removed, as there are now many organizations in the field.

@JoeFaust has been active on Wikipedia too.

OMG… Was it just that everyone in AWES is shit at understanding the process of wikipedia editing?
I find most page markup text a nightmare, this is a structure change, I had no idea how to do it, seems like nobody else did either.
How many engineers does it take? How many other topics worldwide suffer this?

WOW well done.
OK who’s going to populate it?
Roland had complained about it before… and he’s editor in chief … authority figurehead… got nice hair etc…

You can do a lot with copy and paste from the HAWP page. And arguing the case for the removal of the redirect in the talk page, if it gets challenged. I think you can follow the changes to the page if you are registered too?

Really wish I knew what you mean … but it sounds fab… please someone else…
can anyone see I’m trying to pass the buck here?

You can just go in and copy and paste stuff from the high-altitude wind power page.

You have an account on Wikipedia, so you can make a “watchlist”: https://en.wikipedia.org/wiki/Help:Watchlist

But now I see moving the page might be better:

Help:How to move a page

In Wikipedia, a page can usually be renamed if the already-existing title is incorrect or needs to be changed; this is called moving a page. A page may also be moved to another namespace without changing the base title—for example, a userspace draft may be moved to article space. Do not move or rename a page by copying/pasting its content, because doing so fragments the edit history. To be able to move pages yourself, you must be logged in and you must have an autoconfirmed account (i.e., genera...

The most prolific editor seems to be @JoeFaust, who is in favor. The other guy hasn’t been active on the page since 2012.

This page should be renamed (moved) to "Airborne Wind Energy" by an autoconfirmed Wikipedia user. Since 2013, thanks to the first monograph "Airborne Wind Energy", the technology is commonly referred to as "AWE" instead of "High Altitude Wind Power" by the scientific and entrepreneurial community. — Preceding unsigned comment added by 193.205.81.19 (talk) 07:52, 21 May 2014 (UTC)

OK…
Hows about if the group of us on here…
Just bash at it and update Wikipedia AWES for a wee while?
It’s long overdue.

I’m in favor of starting with a blank slate, putting up something really useful and then merging or deleting the original article.

If you can and want to do that, sure. If you find the need to do a lot of copying from the other article, then the wikipedia move page says not to do it. You will end up maybe with a lot of duplicate content, so the HAWP article can then be restructered to be only about HAWP.

The proper thing would probably be to edit the HAWP article and making a new one would just be easier.

Roland has been busy…
en.wikipedia.org/wiki/Kitepower

I made a lot for it some years ago, and recently for a better classification, that under my old youtube name “Volcine”. So thanks.

The proper thing would probably be to edit the HAWP article and making a new one would just be easier.

So submit the request to: https://en.wikipedia.org/wiki/Wikipedia:Requested_moves/Technical_requests

The blind leading the blind…
The proverbial 3 blind men, obsessed with their Wikipedia entry describing an elephant…