Not the same old take on Airborne Wind Energy 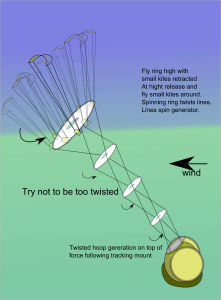 Daisy kite turbines have come a long way. From a twisty bol kite to the most scalable wind turbine concept in Airborne Wind Energy

If I remember you obtained 1.5 kW with only one rotor of three rigid blades. Did you obtain more with the stack of the two same 3 rigid bladed rotors?

Not yet. Nearly.
With the soft kite rigs, it worked like that. More stacking was more efficient.
So far with the rigid blade stacking… It has worked… up until the point (~850W) it reveals the limitation of the way I connected them, which meant the upper driver bridles attaching the lower driving ring between the kites… thus pinching the lower driving ring a bit too much… That combined with the 70/30 outer blade/inner blade mix twisting the ring … bent then snapped the ring behind the blade fuselage.
Couple tweaks and it’ll come good.

So the next steps could be an optimization of stacked rigid rotors, then elements for automated launch and landing. For the last I think about the rotors on top of each other before takeoff then their separation by the unwinding of their respective ropes, using something like leashes between each of them, or winches settled in the ground station combined with rotor placement nodes on the tethers.

2 very good future steps suggested there thanks Pierre.
I’d be delighted to help you complete that optimisation if I can.
And the launch, yep, there’s quite a few ways to go about it.

Yeah we have a lot of work to do.
But we could also have a product without optimisation or stack launch automation…

On your website “Patents Pending” expression is mentioned. It looks like a big and likely happy change,
especially for investors. Cannot wait to read your patents and see them on Daisy.

There was a too rude message from @dougselsam
basically, it was asking if I was wrong previously to promote open source hardware AWES.
and thus could I be wrong in current and future decisions.
I used an admin privilege to first flag, and reply privately… Nothing happened with flagging, so I’ve deleted the post.

No, I still think, it was the right thing to openly publish my initial conceptual developments as a framework for further work.

Both approaches have their correct space for operation and market.

I’m still amazed at the seeming lack of competing work.

Yes, we can all make mistakes, any time… There are ways to help flag the likelihood and train to avoid mistakes when the stakes are high.

There was a too rude message from @dougselsam
basically, it was asking if I was wrong previously to promote open source hardware AWES.

@Rodread You reply to a message you deleted. It is a weird process. So the “synthesis” you made is also weird. I wonder how “there was a too rude message from @dougselsam” could go with " basically, it was asking if I was wrong previously to promote open source hardware AWES.". What is rude in the asking?

The reality is different. He blamed you for being against patents and those who file for years, to finally plan to file patents. What he said on the message is 100% true. What is harsh (or rude) is the reality he describes.

There is something unethical about blaming patents for years and then intending to file patents as if nothing had happened.

@PierreB Having looked back through old forum messages, I don’t see any conflict here.
Yes for the years when I was working on the initial development of a new technology framework, I wanted that work to be open. I am still very glad that is open. That tech framework is potentially an enormous thing. If exploited greedily, to the fullest extent allowable by law, that tech could make a wealth disparity of grotesque disproportion. I wouldn’t trust even myself with that.

Latching mechanism for car door…there are so many patents on such … fine… doesn’t stop anyone opening any other door or car door.
Patenting a specific coupling detail on a kite network. fine. exploit that hard work you’ve done.
Patenting connection of kites into a network form… not good. Far too all-encompassing.