I am presenting a bridle for this lifter kite that will allow approximately 50% depower while the kite still flies fine. I am still working on a system to depower the kite during flight (ie a mechanical release mechanism radio controlled). One could have two separate lines for now, or a weak link that will release the kite from powered to depowered state.

This is still much a work in progress.

The kites are bought at Aliexpress with a search for “peterlynn one skin kite”, costing $106 for 3 square meters and $ 150 for the 6 square meter kite. 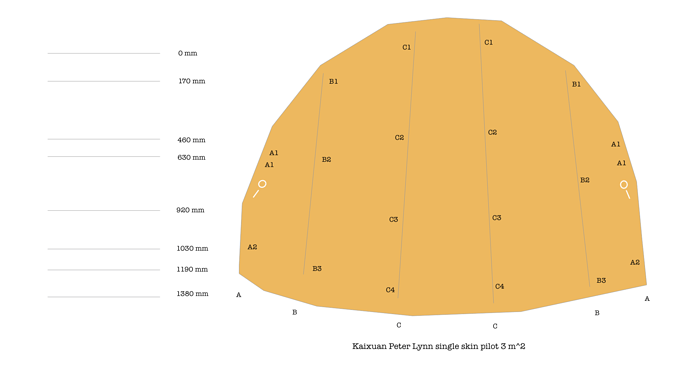 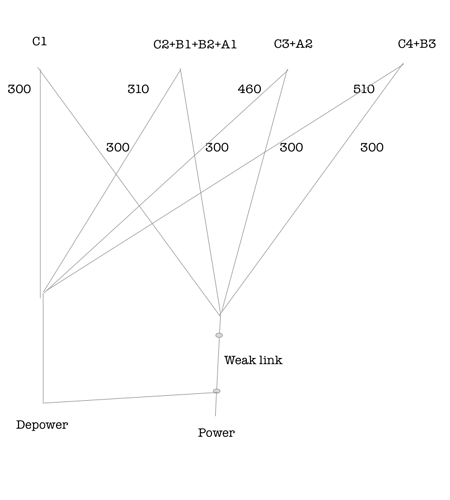 The kite will still fly fine after depowering like this. The chordwise length is reduced as the kite will fold a bit. If the rear lines were futher elongated, they would start flapping, and the kite would start moving more erratically.

The front line is only shortened ever so slightly. Shortening more will make the leading edge collapse very easily. Even so, shortening just a little bit has a big effect. With the depowered bridle the leading edge will be quite close to collapse.

I did not yet test how L/D is affected by using the depower bridle.

I am thinking about a different way of arranging the bridle with a steel ring such that the two bridles dont mix/twist. If they do, the kite may not depower like it should.

I also put a small weight (100 grams) on the kite tail loop during testing to make it fly more predictably to zenith. This may be a good way to fly in general, as the kite can tend to death dive to either side. Mass at the trailing edge adds zenith turning ability, while a tail also adds stabilization and drag. I want the kite to fly as high as possible, therefore I’m just adding mass and not the complete tail.

EDIT: renamed the bridle attachment points according to @Rodread

Great idea, Tallak, to find the depower range possible with SS PL PLs. Note that fully streamed, sleeved, or packed SS are max theoretic depower modes that might still somehow fly in high wind conditions, so there is a lot of potential to explore.

Whoops, forgot to comment that using ballast mass to balance a kite is sometimes necessary, as you are finding, but that such ballast can have avionic functions, like state sensing or night flight conspicuity lighting. The downside of ballast is higher mass overall and higher angular inertia-momentum.