A self-erecting passive Daisy (or other rotary)

I had some nice conversations during AWEC, and also some of the talks got me thinking. I believe the “Daisy” windmill might be able to self-erect even without the lifter at the top. I am thinking some particular design may be necessary to achieve this, but in principle, the more advanced “Daisy” setups could already be self erecting without the lifter kite.

The important thing (sorry if I am stating things that are already obvious to you other guys) is that you have several rotating power generating wing layers, and these layers generate a wake. Because the rotating windmill is not pointing downwind, but rather at an angle upwards, the wake will not hit the next ring at the center of rotation. We can use this fact to make the upper wings in the next ring point more upwards. As they are seeing more wind energy, they will create more vertical lift compared to the lower part of the ring.

The explanation sucks, I have added a sketch to possibly make my point easier to understand. 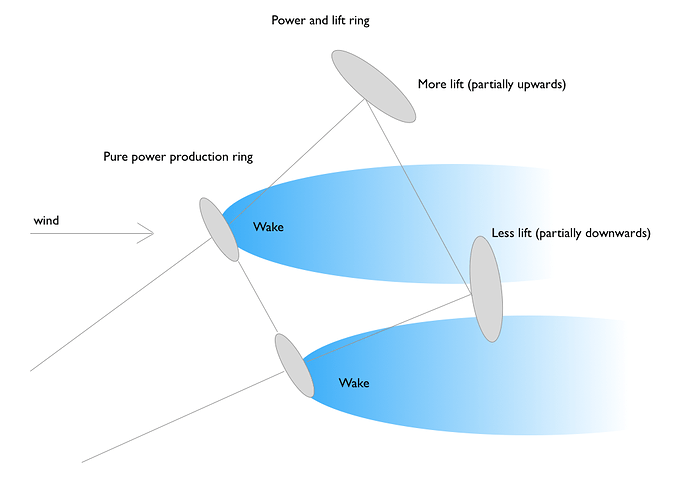 Another observation is that due to this, the tension at the lower half of the rotating torque transfer matter will experience maybe significantly less tension compared to the upper part. This may be a start of inducing oscillations to the system. Sorry

Like it!
Yes, but if the blades are banked the lower wings have a larger surface presented to the real wind direction… So they may have more tension.
Also… With using a lifter, there is already more tension on the lower lines.

Are you suggesting a cyclic change in the wings? It could imply quite a lot of energy expenditure and wear.

If we disregard wind, just keep the rig rotating (lets assume it is powered from the ground), I think we can agree that the top and bottom wing are seeing the same lift, and if we dont consider gravity, the rig is perfectly balanced and thus stationary (but not stable).

Lets say the wings are tilted \alpha degrees outwards, with \alpha = 0 being the wings placed in the rotating plane. The elevation angle is \theta. The wing area is s.

Next lets simplify and consider just the wing at top and bottom of the loop. Both of these are moving only crosswind.

The effect of the wake would have to be larger than this effect. I guess there is no answering this without some simulation work or at least some experience with wakes

Still, lets make some quick estimates. If \alpha = 10\deg and \theta = 30\deg, the difference in projected area is 23%. If we extract 20% of the wind energy to create the wake, the difference in wind speed would be just 6% (energy proportional to wind speed to the power of three), and this would be a change in force of 12%.

So it seems the value of \alpha must be quite small, the extraction of wind energy must be really high and masses low in order for this to work.

Just use negative \alpha and dont rely on the wake. Use centrifugal forces to keep the kites separated.

Probably a daft idea both ways

I was thinking passive control as in no electronics. But adding electric roll control would probably be a simple means to keep the rig upright. But then you wouldnt need to consider all this

There are suggestions of methods to expand coilable mast structures with torque transmission capability in this work
https://www.researchgate.net/publication/312217080_Advanced_Deployable_Structural_Systems_for_Small_Satellites
So a rotary kite turbine might be deploy-able without powering the rig around for launch