Stratta-Bâche-Kite can be translated into Stratta-Tarp-Kite. I put again the informations on What kite plans do you like?, thinking it can be a major innovation to make AWE a reality. Indeed this is the first real kite made with a tarp with almost no transformation. So in some way the kite for AWE use is already marketed as a tarp, and is cheap.

XF-film ( https://www.supreme.co.in/xf-films-products.php, https://www.arktarps.com.au/comparison-to-woven-tarps/ ) I mentioned has a very long lifetime I tested for more than three years outdoor, compared to some weeks of months for a soft crosswind kite in full operation.

10000 m² produce 900 kW, for a kite mass about 1 ton, so a similar power/weight ratio as a MW scale rigid crosswind kite, but with a better possibility to reduce spacing between the unities, and perhaps a safer use.

Possible maximization of the space: yes.

The Stratta-Bâche looks to be a (if no the) real possibility for a viable (here static, not crosswind) AWES, in pumping mode. The two lines can work the two winches and in the same time improve the active stability, using a simple automated control to study for improving the passive stability. A low crosswind mode is also possible. In all ways collisions between kites are without serious damage thanks to both low motion and kite flexibility.

The low efficiency as it is a static kite (apart reel-out move) is compensated with both a higher lifetime due to less strengths on the kite, and less spacing between the unities within a kite-farm. So in the end a better maximization of the available power can be reached in the whole kite-farm area. 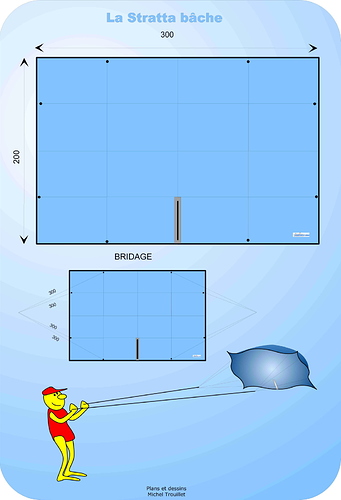 I don’t have much experience with kites, but to me this seems like it would be less stable, especially when transitioning between power cycles. The price of the kite itself isn’t really a big factor yet in awes. I believe the additional reliability and ease of control in inflated kites is well worth the added price.

I also find single skin kites very interesting as being an extreme solution that cannot be improved upon (except perhaps in reduction in skin thickness). But I also dont think price is the biggest selling point. I think that if single skin kites became the norm, they would probably be the most expensive, durable, strong, high-tech materials available. Looking at sailboat sails is probably the best glimpse into such an AWE future that we have.

Doubling the lifetime or halving the weight - how much is that worth for an AWE installation? You should assume that the rig was placed in a developed country, because lets face it, even the poorest parts of the world want stuff that works. If it’s profitable in Europe it will make sense in Africa as well (sorry for the gross generalisation). I don’t think electricity is much cheaper in poor countries.

So - the kite is interesting because its single skin, not because it could be made out if the cheapest tarp available. The fact that it may be cheap to build could enable development through hobbyists short term though

Doubling the lifetime would indeed be very valuable. The bottleneck at the moment seems to be reliability in the broader sense. And if there’s a reliability penalty for using single skin, I think they won’t be used for any first generation awes.

The lifetime of a paraglider is about 500 hours, so 20 days in full AWE operation. With more robust fabrics like for sails, the lifetime can reach 2000, perhaps 3000 hours in full operation, so 300 days. Don’t forget that crosswind power kites are subject to maximum stress due to a relatively high apparent wind, so very high forces/m², and the variations of forces during eight or large loop figures are a factor of deterioration. A crosswind kite is not cheap, and the cost in 20 years operation can be far higher than the cost of blades for current ground-based wind turbines. It is a reason why companies go to rigid wings.

The relatively low lifetime of fabrics or even high-tech laminated films is due to the lack of unity of the material: the woven threads of fabrics undergo more UV and strengths, and the layers of laminated films tend to separate quickly.

Compared to uniform material like XF-film with a lifetime higher by an order of magnitude: I tested it outdoors for more than three years, while a riptstop piece was out after some months. In the other hand the dimensional stability of XF-film or similar is too low for an efficient crosswind kite, but not for an almost static drag-kite-reeling with L/D ratio being 1. And the low efficiency can be compensated with low spacing as collisions are without serious effect. Then a low efficiency allows a less precise control as the risks are lesser.

The safety of several tons rigid wings going fast with their km tether going fast also (being able to work as a giant and mobile guillotine) is a question, knowing it is dependent of the reliability of the automated control. As the control fails, some possibilities are collisions in high speed, high kinetic energy, high mess (tethers). Huge spacing (added to huge space due to the non maximization of the swept area) is the passive mean to overcome the lack of safety. But huge spacing destroys the efficiency of each unity.

Resarchers focuse on the efficiency of a wing by its area in crosswind mode, neglecting the efficiency within a space used, or minimizing it by supposing the wind force and direction are the same within a kite-farm. In these conditions, in spite of marginal improvements on the control, on automated take-off and so on, they cannot compete with current wind turbines. These points I evoke explain that we don’t see and will unlikely see them on the market.

The master concern is the management of the space. And the Tarp-Kite configuration seems to gather cheap and high lifetime material, and a possibility for a better maximization of the space.

IMHO AWES are a mix of low (hot-air balloon and even kite styles) and high technologies (Artificial Intelligence).

The management of the space is not a concern among others like take-off, variants of control, biplane-monoplane, flygen-groudgen and so on.

The management of the space is THE AWE concern.

To say that a 10000 m2 kite is without significant safety issues would be a big understatement. My assesment is that the QHSE risk is huge both for a large scale soft kite and a «rigid» kite (the definition is not even that sharp, there are many stages inbetween that are interesting)

I precise 10000 m² for one or for several kites with low spacing. In all ways utility-scale AWES are dangerous and don’t allow easily any secondary use. But tethered rigid tons wings going fast with their tethers are still more dangerous, and their critical zone is higher.

Indeed inflated kites can be more stable and reliable. Building them with XF-film can be a possibility if no crosswind use is envisaged. For a static (excepted reel-out move) kite the low dimensional stability of XF-film can be a not significant disadvantage. And 3 or 4 years use is not the same as some weeks or months use.

And also some active control can improve the stability of an almost static kite.

The two lines can work the two winches and in the same time improve the active stability, using a simple automated control to study for improving the passive stability.

Adding depowering a single skin kite during reel-in phase can be easier.

Using inflated kites or single skin kites is a detail. The kite lifetime is a significant detail. The management of the space is not a detail.

I always think of this (image) when there’s talk about putting AWES close together: You've probably seen them, perhaps on long roadtrips: wind turbines with enormous, hypnotic rolling blades, harnessing the clean power of wind for conversion into electric energy. What you may not know is that for the explosion in the number of wind... Via the Wakey Wakey thread, I got wind of this photo (seen below the continue reading line) which is a real world effect of the model at left. It seemed worthwhile to share for the sheer uniqueness…

Spacing of current wind turbine only face to aerodynamic requirements within a farm, while AWES face also to other concerns of which that brought by the very long tether in all wind directions, above all if the tether is moving fast.

Spacing due to aerodynamic requirement should meet spacing due to an optimal management of the space filled with AWES, comprising safety and reliability concerns.

This conversation reminds me of the three blind men describing an elephant, (The most important feature is the spacing of the legs!) except you guys don’t have an elephant to work with.

That tarp skin looks smoother than the ironed on skin I put on some foam wings today.
I may need some practice with an iron.
However… These foam wings are going to be really fast and powerful for their weight.
And, they’re not exactly pricey. And they can be arrayed.
And they pack densely over the land. And they’re coordinated…