Air - As the main structural element

In introducing AWES, which we often still have to do, would it be correct to describe AWES designs as being, like a wind turbine where air pressure is the main structural component?

Does anyone present as such?

You would have to describe an aerodynamic enhancement of the difference between top skin low pressure & compressed high pressure at lower upwind surfaces.

Is air the main structural element of an AWES?

The challenge is that Structure is such a broad diverse topic in Engineering Science, beginning with geometric and topological physics principles.

Structural Engineering addresses design with solid-phase materials like metals, ceramics, polymers, and so on. “Structure” is of course also recognized in fluid-phase materials, for example vortices. Its standard these days to look at wing in flow as the systematic interaction of both kinds of structure, solid and fluid. AWES pressure fields are therefore “structural”, as mostly maintained by either solid barrier surfaces or kinematic moment. Electrostatic, electromagnetic, and gravitational “structure” can also figure in specific AWES functioning.

Air is just one major structural element of an AWES, if more so with inflated soft kites. Fabric, sticks, and lines are also major structural elements, as is Composite wing in respective AWES architectures. The derivative pressure field and wake “structures” only arise during use. Moving Air (Wind) by itself is not AWES structure.

My favorite solid AWES structure is Earth itself, as an anchor field medium. Vast inflated arch and dome structures can be anchored (“staked out”) by Earth, with no solid flying mass penalty. Earth is the ultimate stable scalable structure for our kites.

Air as a structural material:

Air is effectively free, weightless, and indestructible. Its pressure and vacuum features can be made to disappear and reappear at will, shaped and reshaped constantly. All on a vast scale compared to rigid spars, which may not be needed at all.

How to manipulate objects with structural Air vortices:

Spin up an artificial tornado between two rotors. An object caught in the resulting vortex can be moved back and forth between rotors, according to which rotor is comparatively driving, and which driven. The manipulator vortex can be switched between new rotors or be dragged around by moving rotors.

This is Air as dynamically structural, without envelopes.

Air is neither weightless nor indestructible.
Nobody can will pressure or vacuum. (at any scale)
The last message is fanciful at best. Unreliable.

A volume of air inside of a larger volume of air, at the same temperature and humidity, is effectively weightless (zero weight on a weight scale). A kite can break its rigid spars, but not destroy its air.

Rod is referring to air as if weighed in a vacuum, or perhaps chemically destroyed, which are clearly the more “fanciful” cases in our AWE context here.

Fanciful was the word I used to describe this notion…

How to manipulate objects with structural Air vortices:

Spin up an artificial tornado between two rotors. An object caught in the resulting vortex can be moved back and forth between rotors, according to which rotor is comparatively driving, and which driven. The manipulator vortex can be switched between new rotors or be dragged around by moving rotors.

This is Air as dynamically structural, without envelopes.

Can you provide an example of how this works? A reference, a diagram, a calculation?
Is it about air as a structural element?

Is a ram air kite heavier when filled with high pressure air at high speed … Or when hung limply from a string in the air?

If you take fire safety seriously then chemical reactions with air are not fanciful.

Tornados are well known to pick up and set down objects. Oddly enough, I myself was suspended briefly in an F1 tornado at kFarm, as witnessed by Taylor Taylor (“damnest thing I ever saw”). It blew my shoes off, but let me down gently. The idea presented is simply a controllable version of the same basic vortex physics.

According to relativistic physics, a kite does indeed accrue extra mass “at high speed” (not just by ram-air mass). Be careful not to confuse buoyant air “weightlessness” with its mass.

Windy Skies thought that was not enough explanation, and sent a backchannel request. I am still waiting for Windy Skies to unmask, as requested.

Here is a jet ring-vortex case, of an object manipulated by air structure-

The Nation's Newspaper provides you with up-to-date coverage of US and international news, weather, entertainment, finance, and more.

Fluidic Logic is a closely relevant study to air-as-structure. As with kites, its not just boundary structures that count, but also the natural (wake and bulk far field) structures of (air) flow. Payne’s “self-erecting windmills” are dynamically structural fluidic logic devices. We also recall Shannon’s energy-information equivalence. Air structure is information and energy. 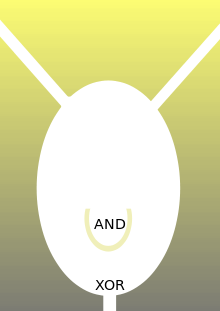 Fluidics, or fluidic logic, is the use of a fluid to perform analog or digital operations similar to those performed with electronics. The physical basis of fluidics is pneumatics and hydraulics, based on the theoretical foundation of fluid dynamics. The term fluidics is normally used when devices have no moving parts, so ordinary hydraulic components such as hydraulic cylinders and spool valves are not considered or referred to as fluidic devices. A jet of fluid can be deflected by a weaker ...