I would like to describe my latest version of autonomous launch and land of a large lifter kite. In the example below I have combined this with an LTA balloon frame though it could easily be combined with other methods of launch assist such as “lever-arm” “telescoping rods” or “scissor lifts”.
The kite rests on a frame of LTA balloons and is secured by stays at the corners so that it is spread out. Similarly the LTA balloon frame is secured in place by four lines at each corner. These two sets of four lines are gathered together by means of transfer pulleys to two wind/unwind stations. 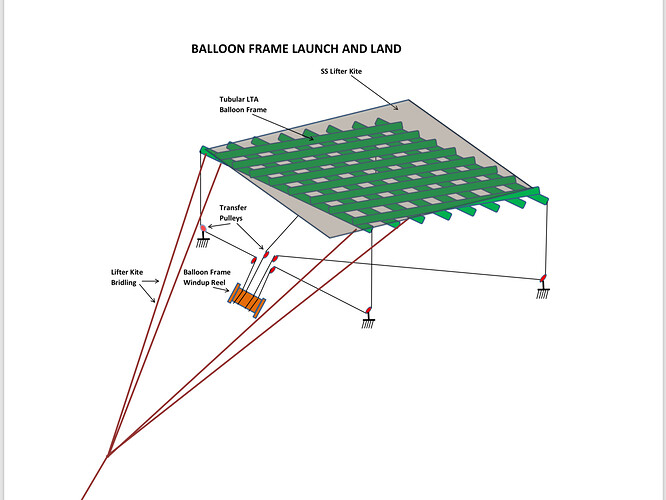 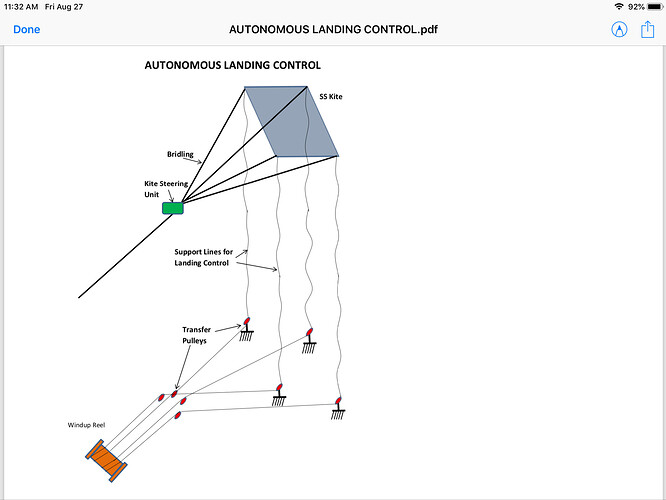 During launch, the LTA balloon frame lifts the kite to an acceptable launching height (30-60 meters) at which point the balloon frame is prevented from rising further. The kite separates from the frame and the frame is lowered back to the ground. The kite continues to rise to the operating height. The four corner lines are still attached, but remain slack.
During landing, the kite is reeled in with the main tether and the four lines at the corners are wound up on the take-up reel so that the kite remains spread out. The taut lines ensure that the kite is precisely located and resting on top of the balloon frame, ready for the next launch.
There is little chance that the four slack lines can become entangled since the lifter kite is always maintained in a stable position. This stands in contrast to the nose line of the Skysails system which must avoid entanglement while the kite performs figure-of-eight maneuvers.
A single skin kite has the greatest lift/weight ratio of all kites. It is also the least expensive. It is scaleable to very large sizes, but must be controlled at all times. A kite control unit can control the kite in the air and I believe that a system of anchoring lines can control it near and on the ground. This will provide a truly autonomous launch and land system.