I regard the AWEIA as dead. Sorry, @JoeFaust.
As far as I know it has never been incorporated and was a loose group of regulars, always dreaming of a flourishing ethical awes industry. I don’t think it can be reanimated.

There’s generally not much interest in open awes collaboration. Just look at the Wikipedia Articles. They are terrible

I’m making my own effort here. It’s slow, as I only work on it whenever I feel like it in my own time. I’m trying to collect true information. The info from the old forum might be there, but it’s hidden. I’m trying to make the info as accessible as possible.
I had hoped for some people to join this effort, but there isn’t any interest.

I’ve started with a list of organizations: https://www.awesystems.info/orgs
It looks a lot like the http://www.aweia.org/ lists right now. But I’ve got my info in a relational database, which means I can do stuff with it much more easily. I’ve also noticed, that such a list just looks like a wall. It’s too much, with most of them being of no interest. I’m going to have to make featured organizations with an intro text and images and stuff. Something that is actually appealing for newbies to read, who just want to get an overview of the state of progress.

I’d like to list this whole IP and patents stuff as well at some point. It’s a long road ahead.

I had hoped for some people to join this effort, but there isn’t any interest.

A to-do list with items that can be finished in no more than x minutes could help.

I’m personally not that interested in what the different players are doing. The (tagged) knowledge they are generating I can see could be useful. Does the field have scientific journals?

I’m ambiguous about patents. They’re probably mostly rubbish? Especially the older ones. We’d have working systems already if they weren’t. It’d be ideal if you could find a list of patents that are referenced most and start with those, and with those from credible players. What could be a good way to build lists like that?

A to-do list with items that can be finished in no more than x minutes could help.

Will do, when anything comes up. Atm most next things are more easily done for me than delegated.
I thought maybe people have their own cool ideas.

Does the field have scientific journals?

None that I know of. That’s why i’d like to list ALL the papers as well to make a directory of awes papers.

We’d have working systems already if they weren’t.

One can patent stuff years before actually getting it to work.

What could be a good way to build lists like that?

Patent search is hard. To my knowledge even the professionals don’t have a definite way of doing it and can’t be sure to get all the relevant results. I’d just go to espacenet and, do a bit of research and write it in the database. Can probably subscribe to future filings of awes companies or check regularly.

There are still folks who certainly won’t give up on AWEIA, neither would Wubbo ever have. Its an honorable voluntary association, even if not incorporated under any government. For those who prefer more official less idealistic association, let AWEurope be the incorporated association less capable of “dreaming of a flourishing ethical AWE industry”.

Wubbo this, Wubbo that… Wubbo is dead. Move on

If you had known him, Olivier, you would know why Wubbo will long continue to make his presence felt. For example, he understood the AWE Engineering-Science R&D world to be a nice “market” for those who want low LCOE power on a grand scale as soon as possible. There is room too for a small venture to seek to bootstrap as well, even it that’s the smaller market so far.

I do not doubt that guy was great Dave. But I also think that looking backward thinking it was better before does not help. 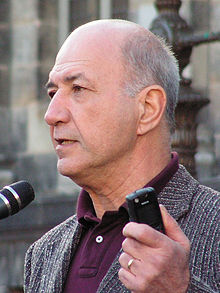 Wubbo Johannes Ockels (28 March 1946 – 18 May 2014) was a Dutch physicist and an astronaut of the European Space Agency (ESA). In 1985 he participated in a flight on the Space Shuttle Challenger, STS-61-A, making him the first Dutch citizen in space. After his astronaut career, Ockels was professor of Aerospace for Sustainable Engineering and Technology at the Delft University of Technology. Ockels was born in Almelo, Netherlands, but considered Groningen to be his hometown. He obtained his MSc ...


“Design
Thanks to his work on the “Laddermill” sustainable energy program, he is considered one of the founders of the promising Airborne Wind Energy. As quoted from his Web site…”.

A Laddermill is a hypothetical airborne wind turbine consisting of a long string or loop of power kites. The loop or string of kites (the "ladder") would be launched in the air by the lifting force of the kites, until it is fully unrolled, and the top reaches a height determined by designers and operators; some designers have considered heights of about 30,000 feet (9144 meters), but the concept is not height-dependent. The laddermill method may use one endless loop, two endless loops, or more su...

"A “rotating loop” “LadderMill” project is designed and developed by the Dutch ex-astronaut and physicist Wubbo Ockels. As quoted from his website:

The LadderMill is the response to the challenge for exploiting the gigantic energy source contained in the airspace up to high altitudes of 10 km. The concept has been developed with the aim to convert wind energy at altitude in electricity on the ground in an environmental and cost effective manner."

Of course it was far better to have Wubbo alive than dead. What I still find vital is Wubbo’s final SpiderMill architecture presented at KULeuven in 2011 in his Keynote, where the zig-zag load-path mechanism is a key pumping PTO method. Hopefully a SpiderMill video or tape exists. kPower is testing AWES PTO designs based on the SpiderMill, so we give Wubbo his due. Further, Wubbo represents the most inclusive leadership ever in global AWE. EU AWE has not been able to replace his world-unifying presence with its provincial venture capitalism values. Lets not give up hope. Lets at least follow Wubbo’s fine examples.

As for AWEIA, not just Wubbo’s founding support counts; there is the Open-AWE_IP-Cloud, Old AWES Forum, TACO1, the Draft Ethics Code, and other resources. Several AWE ventures and individual supporters remain optimistic AWEIA can develop along with AWE, and continue to build its value.

In JohnO’s favor, he’s what Doug calls a “real wind person”, having been part of pioneering HAWT deployment in Africa, and an early figure in GWEC. His role in AWE will remembered far better than Doug supposes. There were many times when JohnO’s leadership counted, like promptly supporting KiteGen in an Italian controversy, at KiteGen’s urgent request.

In fact, its JoeF who started the “Lift” greeting, and quite a few of us have used it, like JohnO, if never Doug.

Patent search is hard. To my knowledge even the professionals don’t have a definite way of doing it and can’t be sure to get all the relevant results. I’d just go to espacenet…

What are the classifications that AWES fall under? Or that are used most?

A post was merged into an existing topic: Questions about Moderation