There are many discussions leading to Betz’s law and its validity.

In first what is Betz’s law? Betz’s law is not a rule, but is a physical law. This law states there is a limit of kinetic energy of wind an idealized turbine can capture through an idealized disk-shaped area section. This limit is 16/27.

Theoretically Betz’s limit applies to all sorts of wind turbines.

But practically current HAWT are closer to the idealized turbine because their rotor has roughly two dimensions, leading to a swept area roughly corresponding to the idealized disk-shaped area section, so in a configuration preventing any renewal of the wind.

If the turbine works in three dimensions, like VAWT, some renewal of the wind occurs. Said renewal of the wind could be neglected for small turbines but not for very large turbines which become far from the idealized turbine within an idealized disk-shaped area section. This has nothing to do with the eternal “beat the Betz limit” generally leading to so-called “breakthrough” but in reality fancy concepts.

Other turbines are expected to work in three dimensions, comprising AWES. By considering the frontal airspace of wind which is swept, Betz’s law could be used but only as a first approximation.

This leads to Dabiri’s work on https://nawindpower.com/stanford-researchers-boost-wind-productivity-with-wake-steering. He states that "we need […] to start thinking about the farm as a whole, and not just as the sum of its parts”, indicating that a single wind turbine facing the wind is more efficient in regard to Betz’s law, but several turbines facing the wind lead to more important losses due to the wake effect. Resulting when the turbines are “slightly away from oncoming wind” the whole wind-farm becomes more efficient.

In Dabiri’s work, but also for AWES or other large devices working in three dimensions, the volume of air is considered, implying the renewal of the wind and the wake effect within said volume. So this could lead to find a rule, perhaps a law, concerning a limit of kinetic energy of wind that could be captured within said volume of air.

I have posted a new version of the working paper (preprint) about “Theoretical calculation of the power of wind turbine”. I would like to have your comments. Betz’ theory does not take into account the potential energy for fast moving wind turbines. If we take into account the variations of kinetic and potential energy, it is not in phase with the conservation of energy. I have tried to present a new formulation to respect the conservation of energy. I would like to have your opinion
https://hal.archives-ouvertes.fr/hal-01982516v10/document

Welcome to the forum @normandajc ,

I remember you produced several scientific publications and patents about active lift VAWT:

The invention relates to a turbine, such as a wind turbine, that makes it possible to recover the mechanical energy of the normal components or the lift of the forces induced by the hydraulic fluid. Said turbine includes a stationary energy...

Please PierreNL, can you indicate whether this work could be related to your current research on Betz’s theory. Thanks.

yes I confirm
I’m making a 25 cm diameter water turbine and I’m going to make a 2 m diameter wind turbine. That’s why I’ve been studying the theory of wind turbines again.
I realised that Betz’s theory masked a problem with the conservation of energy

This leads to Dabiri’s work on https://nawindpower.com/stanford-researchers-boost-wind-productivity-with-wake-steering . He states that "we need […] to start thinking about the farm as a whole, and not just as the sum of its parts”

Wow I’ve heard of this study many times, but never picked up on it coming from Dabiri, and I never noticed Dabiri was at Stanford either. In my opinion, Dabiri discredited himself with his previous headline-grabbing wind energy “breakthrough” of placing lots of vertical-axis turbines below regular wind turbines in a windfarm. Obvious (to me) holes in his theory were:

Large wind turbines are stopped when the wind becomes too strong, not because they produce too much energy but because excessive stress could damage or destroy their structure. The stress induced in a structure is potential energy.

No stress is not potential energy. Only force times distance is. I dont like this passage.

However, the America’s Cup is a good example showing that the Betz limit can be exceeded. Indeed, a sailboat equipped with hydrofoils transforms potential energy into kinetic energy. The kinetic energy of the wind sets the boat in motion. The fluid flowing around the hydrofoils lifts the boat out of the water, thus reducing the drag and improving efficiency. The wind power has not increased but the potential energy that applied constraints on the keel has been converted into kinetic energy by the flow of fluid around the profiles of the foils.

I think anyhow you twist this it doesnt make much sense. I seriously doubt any sailboat is close to approaching the Betz limit.

This seems to me like just «playing jazz» to prove that the Betz limit does not hold. This is
a useless goal. Even if you could slightly beat Betz (which I seriously doubt) what practical consequences could that have? What kind of apparatus are you expecting to approach that kind of energy extraction?

I can’t see how you made it probable that the Betz limit does not hold.

The potential energy of bending blades on a HAWT surely is very minimal, I seriously doubt its worthwhile to utilize it. Same for the lifting of a hydrofoil vessel. Practical concerns limit the height that you could allow the vessel to be lifted.

By making an extraordinary claim about beating Betz then in the introduction already are vague and writing factual errors (stress is potential energy), you lost me. Sorry

In the sea, a vertical axis wind turbine is possible because the wind is hardly slowed down at the sea surface.

This is not my experience from kitesurfing. The gradient is definitively present at sea. Less pronounced yes, but if you want to disregard it, I think you need to provide a better case

For a Savonius turbine, the conservation of energy is respected.

Betz’s theory does not take into account this problem of energy conservation. In my preprint, I tried to present another formulation to respect the conservation of energy

I didn’t say there was no gradient. But as soon as you go up in altitude, you quickly find similar wind speeds at slightly higher altitudes. Which is not the case on earth.

What kind of apparatus are you expecting to approach that kind of energy extraction?

Hi @normandajc
Great to see a challenge to energy models.

Just to help framing our understanding … is your “potential energy” the accumulated sum of strain energy from structural bending?
Rather like in section 3.3.2 Equilibrium and compatibility equations of Achieving ultralight, rigid, durable, low-cost composite AWE kites with efficient design and manufacturing Florian Breipohl, Enerkite GmbH - #2 by Rodread

If so
fine that is energy lost (not converted for extraction) in a standard rotor.
Any blade is only converting a portion of energy to torque and to thrust
Recovering the stressed shape energy in a lull will only give a very temporary and limited boost.

Does your proposal recover strain energy from the system somehow in a cyclic manner?

the article is very interesting. I found Peter Sharp’s idea interesting too.
http://thishappyhomestead.com/wp-content/uploads/2015/02/Sharp_Cycloturbine.pdf

The stresses on a vertical axis wind turbine are cyclic.
If we study the stresses in the arms, they are of the compression type during one half turn and extension during the other half turn. These alternative stresses allow additional energy to be recovered.

Guys: I think the confusion comes from normandajc using the term “potential energy”. I don;t think he realizes there is already a term “potential energy” that refers to gravitational or spring-loaded “stored energy”. (This is similar to wind newbies not understanding there is already an established use for the terms "lift device"and “drag device”.)

I think normandajc is attempting a more generic meaning for the term “potential energy”, as in some energy that is “potentially” available in the wind for possible extraction. Maybe normandajc can explain better what he means when he uses the term “potential energy”. I don’t think he is referring to energy stored in the bending back of blades. By the way, some blade are pre-bent forward to try to reduce tower strikes, but a rotor running out of control can sometimes bend back and hit the tower.

I’ve mentioned in the past, in truck-testing, it is easy to see the rotor briefly exceed the Betz coefficient at startup (visually, audibly, and on the meters), since there is no bubble of still air formed ahead of the rotor yet, but just an initial reaction of the rotor to the full complement of full-speed wind blowing through the rotor area. That initial burst of extra power lasts about a second, then the bubble of greatly-slowed air accumulates ahead of the now-spinning rotor, and then something like around half of the wind flows around the rotor instead of through it, and Betz is in full effect.

For this reason, I believe your calculation is wrong. Because you did not succeed in explaining the gist of the idea in simple terms, I would not be inclined to look at the detailed equations.

I would like to mention I don’t want to be difficult with you, but with Betz law I always default to what is established

For a Savonius turbine, the variations of potential energy and kinetic energy are in opposite directions

Lets start here; what potential energy is stored in the savonius turbine? 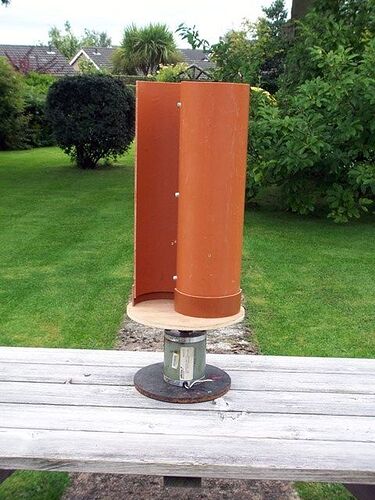 This is the one, right?