Where the hell did this come from?
https://www.brainwhere.com/
Never heard of it.
Fancy rendering, but really hard to make it work.


The founder has supposedly studied Aeronautics etc. as Master at the TU Delft.
https://www.linkedin.com/in/michael-perlberger-24a2b63a
I don’t get it. I think this thing might be theoretically possible but it’s really hard, there are much simpler approaches and trying to commercially is a terrible idea. This stuff is giving awes a bad rep.
What do you think?
tallakt January 29, 2019, 3:11pm #2

I dont like it much. The wings arent even travelling crosswind? Also seems like a lot of drag, weight and technical severe difficulties to implement.

Even so, let them try. They will maybe pivot into something useful in the end

The wings arent even travelling crosswind

They are going crosswind, but only once per circle in the optimal direction.

Impressive what he has been able to accomplish in only one year, he says, of being aware airborne wind energy is a thing. Let’s hope he will pivot when he sees problems with the original design.

How it (should) work: This device seems to be a vertical-axis wind turbine (VAWT) put into the horizontal. See also

Peter Sharp realized also the Sharp rotor I experimented: it uses both Magnus and Kramer effect and has a lift to drag ratio of 2, that is a very good value as a self-rotating rotor. Video on: https://forum.awesystems.info/uploads/default/original/1X/273b31b95b5af3286ca135a0de2c9aef3d29462b.mp4.
A photo of a Sharp rotor with ball bearings: 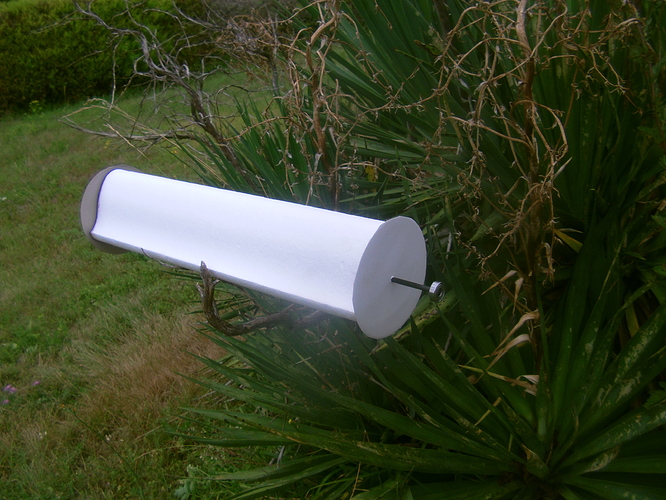 I experimented also a VAWT as a Darrieus-like wind rotor with blades put into the horizontal like Brainwhere: as expected there is no lift.

This devices seems to be a vertical-axis wind turbine (VAWT) put into the horizontal.

In contrast to common vawts the blades might also turn while rotating. (360° pitch control)

In contrast to common vawts the blades might also turn while rotating.

In my previous message there is a video about self-rotating Sharp rotors as blades.

“Geostationary”? Is he really claiming that he can harvest wind and keep it stationary without pulling on the tether?

I interpret that as that being his way of saying that the kite is stationary relative to the earth - because it is attached to the tether and doesn’t do circles or figure-eights. I think he wants to draw the comparison with geostationary satellites, as he also wants to make them into communication satellites.

@PierreB, the two concepts you talk about here are sufficiently different, I think, from what Brainwhere is doing so that they won’t tell us much about its performance or behaviour.

If you look at the BBC segment for example, it is not immediately obvious to me why the turbine wouldn’t develop lift if the blades always had a positive angle of attack.

Horizontal VAWT are possible with blades like Brainwhere or like the Darrieus wind rotor I mentioned on my previous message, as these devices are based on similar principles. Horizontal VAWT using Magnus effect rotors as blades are also studied by Peter Sharp, his Sharp rotor using Magnus/Kramer effect as I mentioned.

All are horizontal VAWT and none of them has a positive lift by themselves, even with blades with a positive angle of attack, as the lift component vector varies in all directions during the rotation.

Perhaps some lift would be possible by using variable pitch for blades, or by using some devices like trailing vanes for Magnus (or Magnus/Kramer) effect rotors (see in 20’’ to the beginning of the video of a vertical VAWT):

He implies that the tether isn’t loaded at all. But that can’t be true.
It tether drag and load on the tether is to absolutely be avoided, there are still other solutions. Y-Tether flygen (makani drones on kiteswarms tether) or counterrotating blades.

That’s what he is talking about here, and why I said his design is different from the ones you posted:

He implies that the tether isn’t loaded at all. But that can’t be true.

I’ve watched the video again. You’re right, here he is talking about that: https://youtu.be/hv1moqNFblU?t=433

I don’t know enough about this to disprove this claim. Do you?

Edit: I don’t hear the claim that there is no force from the kite on the tether, only that the kite is very maneuverable, like an airplane.

Both are horizontal VAWT and the variable pitch control is not new.There are a multitude of means in order to achieve such a control. And the shown prototype looks to be very different from the rendering. Does it even fly?
It is one of the numerous “new” designs.

I don’t hear the claim that there is no force from the kite on the tether,

He does not directly claim that, but one could understand it tha. He claims that he is the only one who can harvest the jet-streams, because of tether weight (not drag - he clearly says weight).

That’s because he claims his system is the only one where multiple turbines can move up and down the tether and support it.

I think because he can make them fly however he wants, he can then station them wherever along the tether where they are needed. He can power the lower ones to keep the tether more vertical, and reduce the load on it so it doesn’t need to be as strong and heavy. I can’t say I don’t like that part of the idea, except that that would need multiple flygens.

I propose movable stacked lifters with turbines attached. Bam! Now his isn’t the only system.^^
And mine isn’t any less real than his.

The research to do this can be easy and cheap: fly one on the end of a conductive tether: Can you control how it flies? Does it give enough lift when you power it? Does it give some electricity when it acts as a turbine? Basic research done. Then it’s just optimizing the thing and deciding if it actually makes sense to make it.

He’s got the funds to do a proof of concept now. Testing his system is neither easy nor cheap. It’s a very complicated thing and it will be a long time until we see one fly, if ever.

Debunking WhereBrain:
Typical Professor Crackpot stuff, in my opinion. It starts with a lie:
" This is no Fiction… This is Science at work"
But it IS fiction. A mere rendering! Like a global warming scaremonger, he wants to hang his hat on the word “science” then I guess what, “the debate is over!”? Celebrating a giant, highly-superior brain… Where’s the video of him flying a single unit? Nowhere! Why? He can’t build a single unit? “Science!” (you know the song) Does he need to borrow my shop? But he can build a website. He can have renderings produced - renderings that do exactly what you tell them to do, which is to sit there, not slicing through the tether, because the rendering does not rotate. Where is his non-flying, tower-mounted demo module? I mean, ya know, just to show that it COULD work if it didn’t have to fly? Where is his brain? Left on the bedside table for the day? Hey, anybody seen my brain??? Where is my brain, dammit!
Take a closer look at the stacked units flying together on the same tether. Look closely at where the tether passes “through” each unit. Notice how the blades would have to slice through the tether 3 times per rotation. See what I mean about renderings? They only prove you can do renderings.

The semi-truck seen on the ground, below the blades-slicing-through-the-tether stack of where-is-my-brain modules, indicates the unit is mobile. Of course! We like to make them appear “fun-size”: Disaster-relief anyone?

“Our Airborne Wind Turbine operates…” - not true! They don’t HAVE an airborne wind turbine. They have a story. It doesn’t “operate”. It will likely never be built at all.

OK so now they “have customers”? What else? Where are Professor Crackpot’s imaginary “customers” always found? That’s right: Off-grid locations! Why? Because they will pay more for electricity? But I thought you had a cheaper way to generate electricity(?) You know, “ladder” all the way to the jet stream(?) Or is it that the “utopian vacation dream” of “remote locations” allows the fantasy to continue, keeping any supposed working system far far away, where nobody can see it is NOT working…

At least they bothered to “check the box” of hosting an onboard internet connection.
Sound familiar? Because you know, lots of people don’t have internet. But our punctuated-laddermill flygen contraption, ladder(mill)ing into the jet stream, can easily handle one more easy job. All we have to do is type the words into a website! Presto - instant internet! Especially since people in remote locations have low standards, so they won’t mind if the connection goes down whenever the wind is not right. And besides, if we decide our contraption - err, um, idea for a contraption - is otherwise worthless, we can eliminate it entirely, and deftly switch horses midstream, and become an airborne internet connection company, like the MIT-associated Altaeros, and come up with new lies, new renderings, to raise still more “money for nothing”, for stuff we’re STILL never really ever gonna do! This is great! Just go to a big-name school, make up a story, and people will send money! Then you can use that money to take beautiful girls out for dinner, and talk about how great the idea is! You’re a rock star, with a new hit! “Money for nothin’, and the chicks are free”! Should be able to last a couple years before people start asking basic questions like “Where is the grid-powered remote location exactly? How much power are they making today?”
This basic idea is not new. For one thing, they’ve basically reduced laddermill to 3 blades, added a disproven Honeywell-style rim generator, converting the groundgen laddermill to a punctuated multi-skygen train. Weak, very weak…

Beyond that, how is this better than Shepard’s idea from 30+ years ago?:
Power generation from high altitude winds
Patent: US4659940A
Inventor: David H. Shepard

Abstract:
There are disclosed method and apparatus for the production of electrical power from high altitude winds. A kitecraft (12) secured to a ground tether (14) supports a cylindrical drum (10) rotatable about a horizontal shaft (60). The drum comprises a plurality of wheels (24) interconnected by airfoils (26) positioned about the cylindrical surface of the drum. Wind action on the airfoils rotates the drum about the horizontal shaft and turns generators (50) to provide electrical power. The kitecraft (12) and drum (10) assembly is constructed to the maximum practical extent from tension members to reduce weight.

Back to Where (is my) Brain:
The rims add weight, and the rim generators, traveling at the speed of the blades, which should be around 100 mph, would have a LOT of drag or friction.

Professor Crackpot often doesn’t appreciate the century+ of others previously working out reasonable diameters for generators… He thinks it should be bigger than the turbine itself - why? Because Professor Crackpot likes to be different!

At 100 mph, the blades would simply break off, due to centrifugal force. Build one module and put it on a tower, and you’ll see. I’m pretty good at telling wind newbies when their wannabe machines will fly apart. “But the blades never broke off in the renderings!?”

Will the modules fly in a stable manner? Nobody knows. Nobody has tried it. Why? It would be too hard"… You mean “too hard” like laddermill? Endlessly-celebrated, yet nobody ever builds one? If you have ever flown kites, you know very well that what SEEMS like it SHOULD be stable in the wind, often is not! Many promising kites want to just dive directly into the ground! Maybe the modules need tails!

Wherebrain - the future of brainlessness! Let’s start a go-fund-me site to help find my brain!
Other than those few factors, it looks great! :)))