I was reluctant to post this in “news” since it is most likely announcing one more project that will never come to fruition, but I guess the “news” is that someone is saying this, and it made a wind energy magazine. There are a lot of classic symptoms of “the syndrome” here. I thought it might make a good exercise for debunking or confirming proposed concepts in wind energy. Your thoughts? Observations? Good points? Red flags? 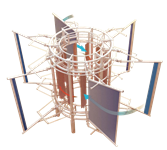 I think it looks interesting.

It looks like a Savonius drag-based turbine with retractable sails limiting drag during return phase.

Perhaps an AWE version, a sort of Magenn with retractable blades, could be adaptable, but by losing the Magnus effect.

Hi Tallak: The one aspect I do find interesting is the guide panels, because we have a huge building here and the wind is extremely strong near the upwind corners, where I’d like to mount turbines at ground level. But beyond that, the numbers they cite seem at least an order of magnitude over-optimistic, including power output, cost, estimated lifetime. In the end it is just one more vertical-axis concept, which typically cost more, produce less, and destroy themselves within the first year, if not sooner.

Hey there Pierre. I was thinking it was a Darrieus (lift-based, cross-axis), but you may be right. They mention a lot of buzzwords like

but every statement is untrue, whether they realize it or not, from the stated output that is impossible for the stated size, impossibly low cost of energy considering the high cost of the complicated structure, 50-year life considering the fabric panels and vertical-axis of rotation, and the statement of “when its first generation 3MW Guided Vane Wind Turbine (GVWT) is installed at a site in Singapore later this year.”

This machine will never be built or installed anywhere at the stated scale. I doubt that a prototype at any scale will ever be built, actually. While they are not promoting group-selfies and “renting office space”, they are still “out-to-lunch” in a complete fantasy-land.
Still, I’d love to see one in action!

Let’s go back to the headline: “How a new vertical axis turbine has its sights on the global wind market”
A new vertical-axis turbine - except for one pesky little detail:
There IS NO SUCH TURBINE. It is merely a rendering. A concept. Not even presented in enough detail that we in this conversation (Pierre and me) have even determined whether the concept is for a lift-based or drag-based turbine. I do think it is envisioned as lift-based from the apparent position of the blades in the renderings, but it is funny how the “Professor Crackpots” of the world just keep trying to “rescue” the Darrieus concept (or is it Savonius?). Well it is a tempting challenge - like a Rubik’s Cube or any “Brainteaser”, to try and rescue the “turbine that doesn’t need to aim”. But I think the problems start with not acknowledging the minimalist nature of what has become through trial and error over thousands of years, a normal turbine. 3 blades and a generator, operating at the highest theoretical efficiency, approaching a minimal amount of material used - now instead of that, you have
Less efficient blades
Higher solidity (more material used)
Lower TSR (see above)
More complication
Added 100% solidity surfaces to direct more wind into the rotor - except certifying agencies will insist that these surfaces are part of the turbine so the swept area is increased, so the overall efficiency is less, not more
The blades are not parallel with centrifugal force but are instead perpendicular to centrifugal force, requiring more material to make these blades stronger.
Which makes the blades heavier, so harder to support…
And the whole “doesn’t need to aim” advantage that vertical-axis turbines can brag about is the first feature to be eliminated when trying to “rescue” the Darrieus turbine concept. “Doesn’t need to aim” goes out the window at the very start, as features are added which require the machine to respond to wind direction in its “rescue”.
I always like to use the model of a can of nuts, about as tall as it is wide:
If you remove the plastic lid, and aim it into the wind, that represents a “normal” wind turbine rotor’s circular swept area of pi times the radius squared. Now, for the vertical-axis version, you have to take the whole can and unroll the sides into a long rectangle that has an area of four (4) times pi times the radius squared - four times the swept area, to intercept just a little more actual area from the wind direction, albeit at a slightly lower efficiency, resulting in about maybe the same amount of power, but at about 2/3 the RPM, which requires twice (2x) the generator size just to turn the rotation into electricity. So you’ve used many times the blade material, twice the generator material, sweeping 4x the area, to get the same power, from a much more complicated machine, with much heavier blades that suffer reversing forces twice every rotation…
Will people ever learn? I don’t know.
I’m just as inclined to jump in and try to “rescue” the Darrieus concept as anyone else, in fact I have some very new ideas in that direction, but you have to at least acknowledge the uphill battle one faces the moment they decide to even promote renderings of vertical-axis machines, let alone try to build and operate one, let alone pretending you have a breakthrough based on presenting some renderings. If these guys were serious, they’d be able to show you a working model. But the Professor Crackpots of the world are in most cases not able to even work on their own car, let alone build and run any of their genius breakthrough concepts.
So the superior vertical-axis turbine remains, for now anyway, a Rubik’s Cube of wind energy (except without the people who can do it in a few seconds with their eyes closed)…

It looks like a Savonius drag-based turbine with retractable sails limiting drag during return phase.

Hi Pierre: I was thinking it is a resurrection of the first, most ancient type of windmill known, from ancient Persia, where walls directed more air through vertical-axis Savonius-type rotors. 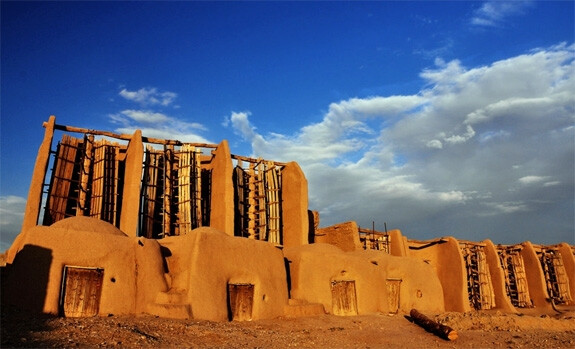 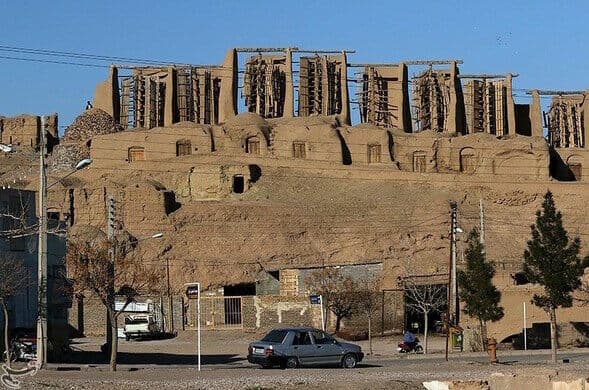 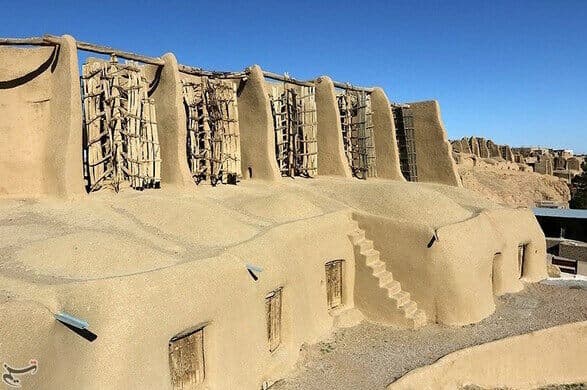 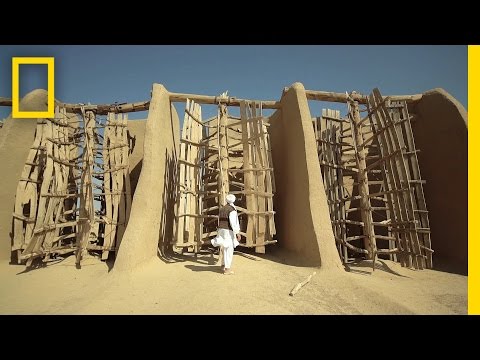 If it was a Darrieus type wind turbine, the designer would not have sought to fold up the sails during the return phase. Indeed a high L/D ratio profiled blade can generate even by going upwind (hoping I am correct).

If it was a Darrieus type wind turbine, the designer would not have sought to fold up the sails during the return phase.

Well I guess we’ll find out “when its first generation 3MW Guided Vane Wind Turbine (GVWT) is installed at a site in Singapore later this year.”