“We plan to mount Makani’s kite on a small spar buoy moored with a synthetic line and gravity anchor,” says the firm’s chief executive, Fort Felker.
Yes, the floating foundation first invented by me. U.S. Patent 6616402

Can’t see a buoy in your patent, but Makani do have a granted patent on that buoy:
https://patents.google.com/patent/US9308975B2/en

Hi Luke: See Figs. 14, 15, 16, and 17. The specific U.S. Patent was issued less than a year ago, based on that original disclosure. It is U.S. Patent 10,024,307 Floating Marine Turbine. It is for any turbine, supported by a single floating vertical tube, and the claims also include the fact of a turbine itself, the mooring anchor lines, and the power cable, etc., all described and illustrated in U.S. 6616402, claimed in U.S. 10,024,307. It’s funny how Statoil (now renamed Equinor) goes to such lengths to “explain” how their guys supposedly “invented” it 3 days before my priority date (coincidence? hmmm…), on a napkin, in a bar. Easy to cook up after the fact, unlike a proper witnessed engineer’s notebook. I can just picture their attorneys telling them “You have to find a way to say you thought of it before this date”. Funny. But none of that applies in the U.S. anyway. Over here, I own the intellectual property of a single floating vertical tube supporting a wind turbine offshore. At some point it’s nice to get actual credit for something we contribute to humanity’s knowledge base and creative urge to improve the world. Just trying to do my part to “make the world great again”, or at least keep it on an even keel, so to speak.

Dang I am good at typos. I meant to say “Floating Marine WIND Turbine”.

Once again, Doug steering off-topic to make his claims. He seems to think patent claims are diligently reviewed for prior art, and are proof of priority. Its an open question if the ST is the first spar-buoy wind-turbine concept, and further if he is able to legally block adoption of spar-buoy concept for all WECS, not just his ST. AWES do not necessarily depend on a spar-buoy, or equivalent resistance to heeling force, as much as wind-tower designs might. Conventional HAWTs on Spar Buoys date to at least 2008, before Doug seems to have made that connection.

I guess we’re back to “everything you say is wrong”…
You seem to have everything backwards and inside-out, as usual.
Hey daveS: How come you still can’t make any power after 12 years of trying?

You forget the Japanese Power Plant I powered with a FlipWing wingmill. One can’t make better power than that, even on a pole

Please change the topic to be corrected further, under Forum guidelines.

If imperfect, the BBC article still stands as reasonable AWE reportage. Insight into E-VTOL and LTA limitations is a credit to the BBC. Emotionalized analysis falls short by comparison.

That post is a no-no.
You can absolutely claim someone is wrong. But please point out why exactly. If you don’t want to, because you find things too ridiculous to engage, you may state something like “I strongly disagree with this post / on everything you just said”.

Hey daveS: How come you still can’t make any power after 12 years of trying?

But please refrain from challenging people off-topic instead! Argue in good faith!

You forget the Japanese Power Plant I powered with a FlipWing wingmill. One can’t make better power than that, even on a pole

Please change the topic to be corrected further, under Forum guidelines.

If imperfect, the BBC article still stands as reasonable AWE reportage. Insight into E-VTOL and LTA limitations is a credit to the BBC. Emotionalized analysis falls short by comparison.

The power level of the Seiko watch was relevant to both KiteLab and Seiko. “Small is beautiful”. The demo remains a first in AWE- Steady clean power output from chaotic kite input. The wingmill WECS side is novel and cool too.

The problem with trying to defend a buoy patent against GoogleX is not just the uncertainties of applicability claims and prior art, but that litigation can be dragged out for many years in favor of the wealthier party. Defending a hot patent costs millions, and is repaid by revenue. Spar buoy IP revenue will be slow to develop.

The power level of the Seiko watch was relevant to both KiteLab and Seiko. “Small is beautiful”.
The problem with trying to defend a buoy patent against GoogleX is not just the uncertainties of applicability claims and prior art, but that litigation can be dragged out for many years in favor of the wealthier party. Defending a hot patent costs millions, and is repaid by revenue. Spar buoy IP revenue will be slow to develop as well.

Great daveS, I’m glad you are so proud of the lowest recorded energy from any wind energy device in history.
Beyond that, I never said anything about “defending” anything from Google X. A U.S. Ptent does not apply in Norway, for one thing. And to my knowledge they re not sellng my invention in the U.S. But y patent attorneys are rated in the top few, internationally. Just so you know.
It makes no sense to try to have a conversation from you because most of what you say is nonsequiturs, and you truly make no sense whatsoever most of the time. I’m not exaggerating there, and to me it seems bizarre how anyone could possibly go on as you do.
You know less about patents than you do about wind energy, quantum physics, and all the rest of what I say is your almost 100% nonsense. Like when you say examiners don’t check for prior art when examining claims. What the hell do you think they are doing, writing goofy magazine articles? Prior art is not only exactly what they are looking for, it is pretty much the ONLY thing. I got credit for my contribution. Period. Sorry if you don’t like it. Again, I think it’s important to let the new people here know they should scrutinize your words very carefully before taking anything you say seriously at all.

Joe Faust is the acknowledged top AWE patent expert. No USPTO examiner can hope to do better. Most patents never earn back the filing costs. The game is mostly statistical, lacking any blocking inventive leap. AWE IP will be pooled for the same reasons other emerging industries pooled IP, like powered-aviation did a century ago. That’s the best path for your IP, if no one will license one-on-one.

Dear daveS: Well why not go back to your own “forum” then? That way you can have Joe as your protector so if anyone strongly disagrees with your ongoing nonsense, he can kick them off. 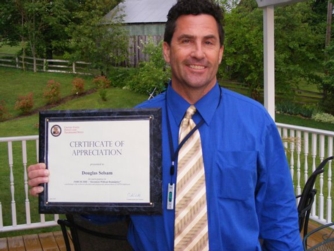 See the plaque I’m holding there? That’s an award given to me by the U.S. Patent and Trademark Office after they invited me to come to D.C. to speak in front of hundreds of patent examiners, representing America’s Independent Inventors. I’ve hung out in their offices with them over the years, and seen the incredible non-public collections of prior art, in addition to wandering the public stacks there before internet searching was available - an overwhelming amount of physical shelving stretching on seemingly forever. You have no patents. I’m pretty sure I have more types of wind turbine patented than any inventor worldwide, and counting. I don’t think you or Joe are about to teach me too much about patents. I know your angle seems to be to show everyone how much smarter than the rest of us you are, but I would suggest, besides Joe, I don’t see any other evidence or independent confirmation of your supposed expertise in Airborne Wind Energy, or anything else, for that matter… I wish you would stop trying to have the last word on everything. You have been nothing but annoying for like 12 years straight now. I don’t see articles on you or your kite-play. I don’t see any videos on you. I don’t read any coverage of your supposed pursuit of AWE in books or magazines, and honestly do not think you are even involved with wind energy at all, except to keep SAYING you are, on the internet. There IS an objective standard for wind energy, and that is to show power output. You try to denigrate even the CONCEPT of producing any power at this point. One more attempted dodge of reality. You call anyone you don’t agree with a “troll”, but here you are, with basically little-to-no recognition by others, except Joe, negligible power ever supposedly generated, on the level of a rounding error, if you are to be believed, and just a lot of empty, annoying talk on the internet. Now you follow me around harassing me for every comment I make on a completely different forum. Seems like the troll of trolls, trying to accuse others of being what you are. To me it seems impossible to have a logical conversation with you at all. If not for your own words on the internet, what supposed involvement with wind energy would you even be able to claim? What is your real goal, just to see how annoying you can be? I know, it’s a silly question, with an obvious answer.

Congratulations on your accomplishments. May there be more to come.

To answer what my real goal is, recall its RAD, rapid AWE development, under aerospace up-scaling time constraints (2030 timeframe). Its odd you still have to ask. Wishing my efforts, and the efforts of so many others, did not annoy you so. We try as best we can. Nobody is in AWE in order to annoy you.

If nothing better comes up, you are welcome to include your IP in the Open-AWE_IP-Cloud. No hurry, let AWE IP continue to evolve.