Buy this report on AWE

Hey Guys! I was googleizing AWE “news” and found a comprehensive report you can buy! Actually more than one.

This one (above) I clicked on said:

" Don’t miss the trading opportunities on Airborne Wind Energy Equipment Market. Talk to our analyst and gain key industry insights that will help your business grow as you create PDF sample reports

The Major Players Profiled in this Report include

Anyway I was wondering if there actually IS any news in AWE?
I keep forgetting the names of the “players” (companies) since they all start to sound the same “E-this” and “Kite-that” - ya know…
I.m thinking, wasn’t it Oh… Ummm… What;s-their-name… Oh what the hell - oh yeah, “Ampyx”? -weren’t they supposed to be doing something?
“Skysails” -weren’t they supposed to be doing something?
E-kite or something?
Enerkite or something?
Well we know k-Power isn’t about to do anything…
Am I missing something here?
Besides a few brain cells?
Yes I went skiing again today.
Well, how is kite-reeling going these days (again)?
I know I keep asking that - year after year - anything yet?
Are we down to just kite-reeling yet?
Is there anything else these days?
Well, how is the kite-reeling going than?
I have to ask at least once a year.

It looks like a now updated report from Dr. Peter Harrop (IDTechEX) whose the schedule is on: 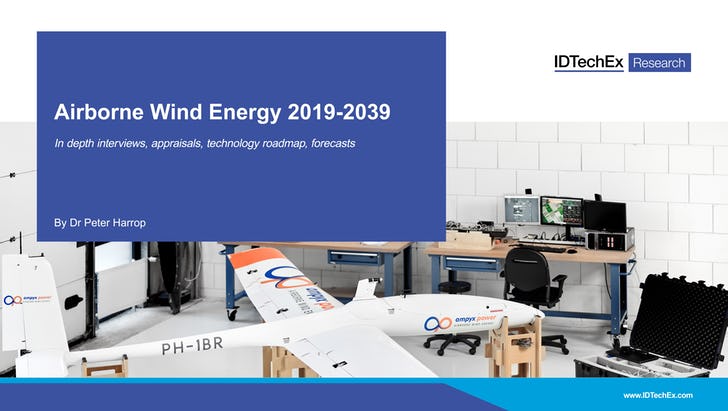 AWE is a new generation, zero emission generator - mobile, no infrastructure. In 2018 it moved from 1. Mainly engineering led projects seeking size and 2. Modest sales of hobbyist systems to something in-between that is far more promising - first...

The regurgitated, pre-formatted , generic market reports did seem to get a refresh recently.
I asked one of the companies whether or not their report included rotary systems?..
After taking a bit of time explaining what I meant

yes of course we do… We’ll send a sample

It came by email, populated by parrot with exactly the same played out script as they used to but with the slight addition of what I’d just said. Rotary systems.
Sample and ToC_Global Airborne Wind Energy (AWE) Systems Market, 2020 - …pdf (2.4 MB)

Which funding obsessed market player thought it was a good idea to start these things?
Has anyone benefitted from it?

Funny - these people know nothing, yet want $6000 for their “report”.
Their previous report said there would be a 500 kW product on the market by 2019. What else do we need to know after that big miss?

Hi Doug, let’s try to be a little positive. Impressive progress is underway in kite surfing and boat traction. Makani produced positive power from 11-12 m/s wind speed. Kite-reeling makes high peak power. Kiwee is marketed. k-Power has built a 300 m² modular kite (Mothra) with very few means, and Dave Santos has brilliant conceptions: it is the reason why you are impatient, waiting for immediate results from him since 12 years. If all this leads nowhere, there is still a future for AWE: it is called HAWT.

Which funding obsessed market player thought it was a good idea to start these things?
Has anyone benefitted from it?

There is nothing more frustrating for people in wind energy, than the level of ignorance often displayed by those who claim to know all about it, and sell you either some whacky excuse for a wind energy system, or their compiled ignorance “report”, for thousands of dollars, while not comprehending a single relevant factor, the whole time.
Similarly the whole field of AWE is mostly populated by a similar level of noncomprehending ignorance.
And it gets worse. Basically it’s ignorance piled upon ignorance, piled upon more ignorance, easy to see in many cases, once the years have rolled by and it becomes easy to see the almost universal lack of results, despite over a billion spent, and thousands of supposedly smart people participating. Well it’s actually always been this way in wind energy. Either you know what you’re doing, or you don’t, and it does not matter how much money you have, or how many “engineers” and “PhD’s” are hired. In wind energy, either you get it, or you don’t. Just as many of the very best guitarists, like Jimmy Page and Jimi Hendrix, never read music, talent in wind energy is rare, and not necessarily related to academic credentials. In some fields, you can’t “hire” your way out of simple ignorance.
What did McBlarney show us? That flygen can’t work? No, they just showed us that they were one more “Professor Crackpot” effort powered by cluelessness. The glaring classic “Professor Crackpot” symptom in that case: “We need to make it really big or people won’t take us seriously!” Well who is taking them seriously now?
The only people stupider than the promoters of these reports are the people who would buy them!

Wowweee those flying boats are impressive Maybe not as reliable as a wind turbine. Amazing how after all the time building to a few rules these boats are so well matched for racing (apart from the UK at the moment familiar story) Would love to know how much sail head twist control they have… Been trying wing foiling here lately. Unreal the difference between displacement and foil modes. Hope you’re all enjoying a good wind down to holiday Or pushing kites harder than ever. [20201219_1955…