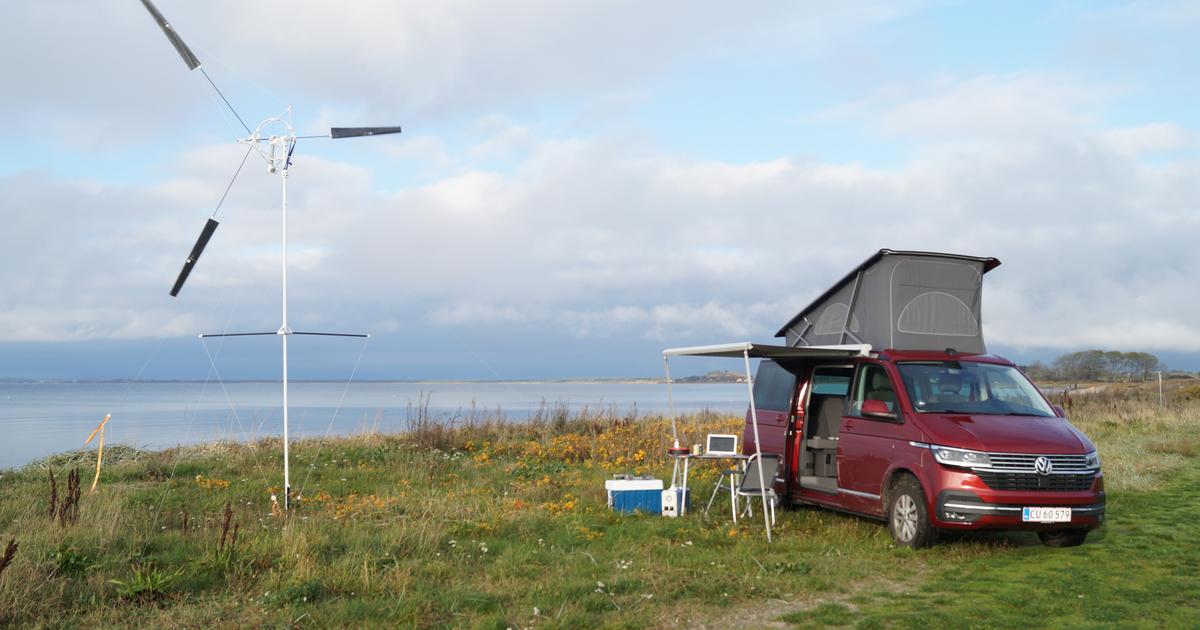 Portable Wind Catcher turbine pops up in a claimed 15 minutes

Wind turbines are a good source of renewable energy, but they typically incorporate heavy-duty towers – thus making them permanent structures. The new Wind Catcher, however, is designed to be lightweight and portable.

One more press-release breakthrough in wind energy. OK the one thing I like is the guy has long curly hair like me after going on a haircut strike years ago. He needs a couple more years of no haircuts to catch up though.

Nice to see coverage of anything wind, but it seems kind of silly to hear them say they “replaced the tower with 3 wires” while showing it on a tower. It really just has a short guyed tower, with guyed towers being standard for decades in the “small-wind” turbine category. Nothing new except it is the shortest, wimpiest guyed tower yet. Belt-drive is another typical beginner no-no. There are features I really like about this effort, and hats off to anyone who gets any machine actually working at all, seriously, cuz it isn’t easy, but, to an experienced small-wind person, this looks like it could be mostly just a lot of typical beginner mistakes - too short of a tower is a biggie. Most small turbines use 4 guy wires to make it easier to tilt up and down for the inevitable repairs. Looks like it is good for fun, until it gets hit with a strong wind, at which point, bye-bye. Here at our California location, we’re powered by the market-leading brand “small-wind” turbine, about twice the diameter of this one. It weighs over half a ton, is on a 120-foot tower, makes 10 kW+, costs at least $75,000 installed, and we’re on our third (3rd) one because even this market-leading-high-dollar unit can’t handle truly strong winds without destroying itself. There are broken-down units, some missing blades that each weigh over 50 lbs., and can fly over 800 feet in a storm, all over town. And it goes downhill from there. I think the advantage of this one is it could possibly be quickly taken down if winds get too strong, but then again, by the time you realize the wind is getting too strong, you really don’t want to be anywhere near a small turbine when it explodes! Wind turbines are mainly categorized by their method of overspeed protection, so you are not put into that high-wind emergency situation. Not sure what the method of overspeed protection, if any, this unit has, but good to see any unit that actually works at all emerge. Many self-declared wannabe wind energy innovators never get anything working, period! This at least works. Stick to it and maybe it will go somewhere.

Did the “small-wind” turbines you replaced make their money back?

You must be Luke’s brother, When are you guys going to space?

Thanks for asking about our situation here. Anyone who knows small wind realizes they never pay for themselves, at least if you had to pay full price. In this case the installation was already in place when I moved here during the real estate crash. Significantly, the turbine adds no value to real estate here. Why? Hmmmm… Even if you get one for free, just the maintenance costs more than just paying your electric bill, since even replacing one piece of leading edge tape requires a crane and crew.
When I moved here, the turbine was 4.5 years old, still barely within its warranty at the time. It was making a lot of noise. I could not get the goofy local installer to even look at it, but a friend climbed the 120-foot tower and found the bearings were shot. The machine was literally falling apart. I later heard from an out-of-town authorized dealer that the manufacturer had suffered a bad batch of bearings. The local installer showed up with a hired crane to take it down to be shipped back to the factory for a rebuild, but accidentally dropped it 100 feet and it was destroyed. He “just happened” to have someone else’s used turbine on a trailer that he substituted for mine, but it immediately started making a lot of leading edge tape noise, sounding like a freight-train and a large helicopter in strong winds. Of course nobody here knows anything about this sort of thing, but it was very loud. I finally got the idiot local installer con-man to reluctantly come back with a hired crane to fix the piece of tape, which should have been addressed while it was on the ground, and he was really angry that I wanted him to fix his own bad work. Well, it turned out that this charlatan’s crew (mostly his family) had never connected one of the three main power wires to its terminal. The loose wire caused an “airplane engine” noise for years but tech support kept telling me this irritating noise was “normal” and not to worry about it. “Just the foghorn noise, no big deal, lots of our turbines make that noise”. Well one day the noise got 10 times worse and we had to shut down the turbine. I brought in an out-of-town authorized installer to take a look at it since the local installer had proven to be a complete idiot and a ripoff artist too, as local residents had warned me. He and his wife had also tried to get us involved in a well-known multi-level marketing scam - Lyoness, illegal in much of Europe.
This out-of-town installer cost more because of travel, but at least found the loose wire which turned out to have been placed just behind its terminal, rather than being inserted in its terminal, so it had been making contact, but vibrated against the terminal, hence the noise. It had finally fallen away from the terminal, so the generator had begun “single-phasing” which destroys generators. There was no sense of responsibility from either the manufacturer or the local idiot installer. The out of town installer reconnected the loose wire but the damage had been done: less than a year later the 1/2 ton generator burned out. I bought a third turbine for a couple thousand from a neighbor who had luckily gotten the government to pay $120,000 for him to have an entirely new installation because they had bought some of his land for a flood-control project and his turbine was in the way.
Without the rebates and incentives, there would be no turbines in this area. Without insurance and further rebates for replacing broken turbines with new ones, nobody would bother replacing their self-destructed turbines.
And that is the best small turbine on the market, and their most active installer. It goes downhill from there.
You guys have no idea how difficult and nearly impossible wind energy can be. There has never been a single reliable small wind turbine on the market, ever, anywhere. No model can withstand truly strong winds. They are all destroyed after a few good storms. Almost every manufacturer has gone out of business. Average people never hear about any of this. All they read about is how wonderful it is to be “saving the planet”. In reality these machines churn the economy for more than the value of the power they produce, and that means more, not less, total CO2 in the air from selling, permitting, inspecting, manufacturing, shipping, installing, maintaining, repairing, and replacing these not-ready-for-prime-time machines, all of which takes a lot of fuel.
I would guess even just the combined salaries and expenses of all the people involved in testing and regulating small wind turbines exceeds the value of the electricity they produce.
Then in the face of that, you have people coming along making all the beginner mistakes with turbines that any experienced wind person can see would not survive even one minute in a truly strong wind, acting like they are saving the planet too. The whole thing is nuts. I have to say though, the turbines I build survive better and longer than most.
:O…

Interesting read about the reality of small wind.