Cos Cubed Losses vs Altitude Gains

This analysis applies to systems like Daisy, Parotor, MAR3 and even parachute systems where the axis of the turbines or sails are parallel with the tether. With these systems, increase in tether angle results in power losses due to the cosine cubed effect. In contrast, higher altitudes cause an increase in wind velocity with an exponential increase in power. For this analysis I have assumed an aggressive wind profile where wind velocity varies with height by the 0.2 power. Wind velocities are shown on the x-axis of the graph. As expected, the biggest gain in performance factor (power) is achieved at minimum tether angle and maximum altitude. The problem is that tether length is unacceptable at these conditions.

This analysis does not apply to systems with multiple coaxial turbines such as Skyserpent and multiple ring Daisys where masking effects are significant, especially at low tether angles. 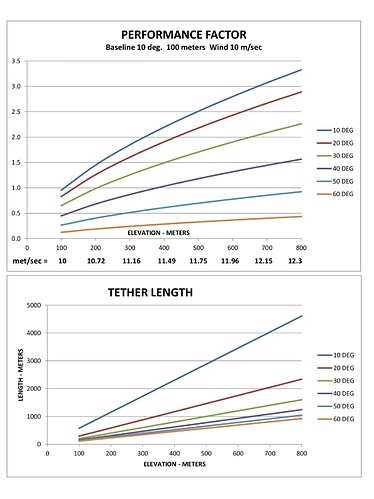 image1382×1843 190 KB
The above analysis confirms my opinion that the Kitewinder system is superior to the other systems. The turbine is oriented to face the wind and so there are no cosine cubed losses and the device can operate at much higher altitudes with a relatively short tether (cable drive). The only penalty is the requirement of a larger lifter kite to maintain a higher tether angle. For example, if we assume a tether angle of 45 deg for Kitewinder then the performance factor (power increase) will be 3.48 at 800 meters elevation and the tether length will be 1131 meters. The kiteline angle of the lifter kite must be 60-65 deg. in this case.
Windy_Skies July 20, 2022, 9:04pm #2

The lift is related to the velocity squared, so if your crosswind kite,

All the systems I am comparing (Daisy, MAR1, Kitewinder) are static systems and do not involve crosswind flow.

All the systems I am comparing (Daisy, MAR1, Kitewinder) are static systems and do not involve crosswind flow.

They are all lift, or crosswind based, turbines?

I asked myself this question for a long time. Perhaps @Ollie could reply.

As when the lifter kite is removed, the rotor goes down to the horizontal at 0° elevation angle, it can be said that it has no positive lift of its own.

On the other hand when held by the lifter kite, the rotor generates lift like an auto-gyro rotor which is tilted by mechanical means.

Can we speak about aggregated lift?

In this topic @gordon_sp has the blades point directly downwind so the lift from the rotor can be represented as a vector going downwind only.

If the rotor was aligned with the tether at 45 degrees, the length of the y component of the first arrow would be 0? This again ignores the weight of the system, and probably more things.

The weight of the system would just be a third arrow I think going down from the second arrow. You can adjust the sizes and angles of the 4 arrows to find a configuration you like.

This analysis applies to systems like Daisy, Parotor, MAR3 and even parachute systems

I think this analysis can be as complex as you’d like and still not good enough.

You are on to something but the devil here is in the details; how long tether can you have, how is the rotor oriented, bridling, mass per kite, L/D, everything plays an important part.

In simulations I generally find cosine losses far exceed wing gradient gains. So you end up with the lowest practically useful elevation angle determined by distance to ground and looping radius. Which again may tie in to wingspan and tether length. Tether length again ties in to the L/D of your blades/kites and the solidity of your turbine.

I did make a simulator for this covering «The Pyramid». I dont remember if gradient wind is in there at the moment but I think maybe. The problem in this case is just, «The Pyramid» does not really support very long tethers. Though I’m sure maybe the simulator could be used to produce interesting results for whatever design you are thinking about, if it features rotary power transfer. It would be comparable of course, only a desicated simulation would bring you anywhere close to a precise answer.

Please let me know if you are interested in this, we could run some simulations together.

edit: wind gradient is not there but I am willing to ad it on request. I dont really interest much in wind gradient lately due to the arguments presented above