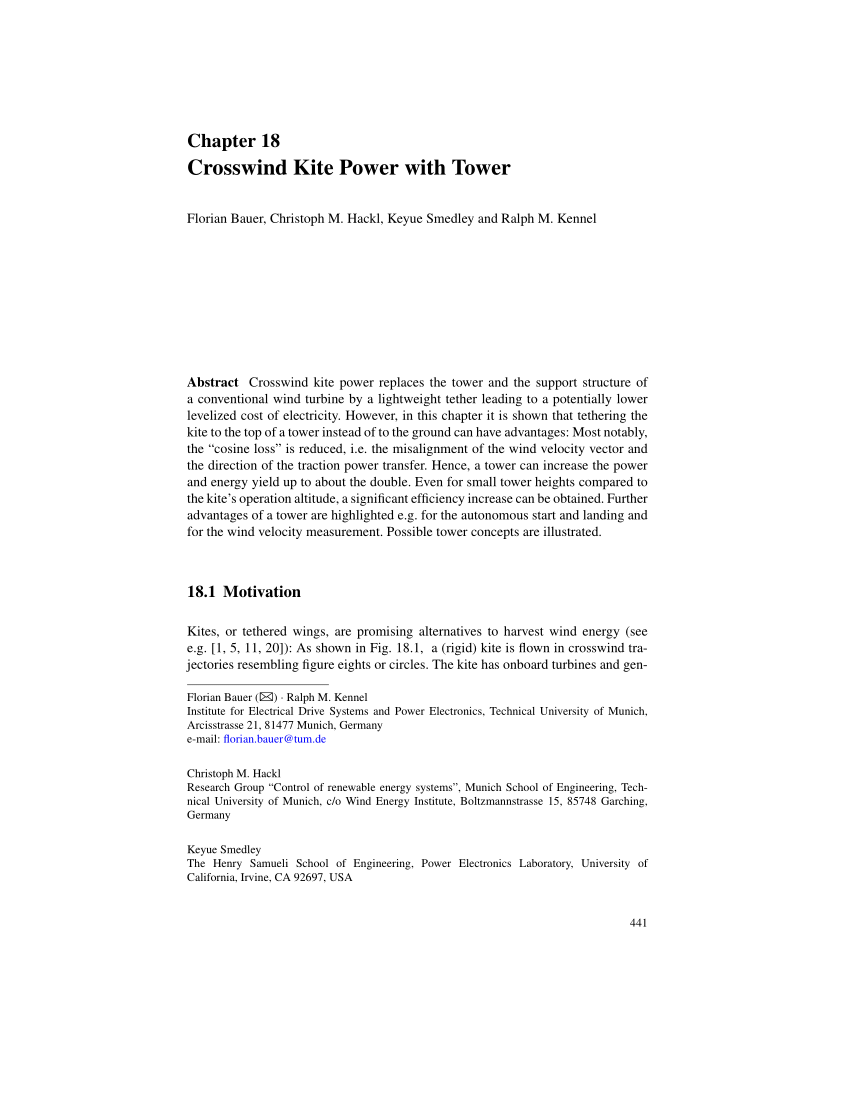 PDF | Crosswind kite power replaces the tower and the hub of a conventional wind turbine by a lightweight tether leading to a potentially lower levelized cost of electricity. However, in this chapter it is shown that tethering the kite to the top of...


In a first approach adding a tower to an AWES looks weird. But some significant advantages could occur, like the possibility of implementation above forests.

In the same time it could be a new field of R&D mixing AWES with current ground-based wind turbines in order to cumulate the advantages to reach higher winds.

Very interesting.
Made me think about wether it would be possible to use lifter kites on the tether of a multi-wing flygen awes.

A negative factor is the high embodied energy of a tower. Its worth calculating how long tower ecological pay-back takes, and how AWES towers compare with clearings in economics and sustainability (grass is very good at carbon-capture). Either way, high unit-power is essential to maximally conserve forest.

Prediction- Towers and masts will continue as useful niche method in the kite toolbox.

I think the forest advantage is bonkers.
Just network the tree tops together as a wide anchor field.
Now that’s proper bonkers.
A tower would have helped my test yesterday. I only had a few hours of wind over 4m/s. Most of the time was taken with single rotor testing for baseline data and getting the new control software dialled in. The wind was dropping by the time the dual rig was flying. The tower might have prevented an eventual low lift whole line sag which led to the lower rotor striking the ground… Very little damage considering …yet not exactly an optimal outcome

A canopy raft in Francis Hallé style like on http://www.radeau-des-cimes.org/the-treetop-raft/?lang=en could perhaps be an AWE station in forests.

An antenna like this but with guy wires as a AWE tower looks better, the flygen wing being at the top:
https://carte-fh.lafibre.info/galerie_photo/picture.php?/5754/categories

Some observations in @dougselsam’ style: adding a tower as suggested, adding blades instead of kites, then we have the future of airborne wind energy which is the current ground-based wind turbine.

Some observations in @dougselsam’ style: adding a tower as suggested, adding blades instead of kites, then we have the future of airborne wind energy which is the current ground-based wind turbine.

If you don’t really have a better way, and if you follow the clues, you’ll at least arrive back at what works. For most wind energy “inventors” the entire adventure amounts to just a roundabout way of learning about wind energy, starting with denial, then slowly, begrudgingly moving toward what works. More stubborn people will never have anything that works at all. Imagine how mystified people can be to figure out, all those problems miraculously solved, an automatic guidance system for their “kites”, requiring nothing but a simple steel tube. In most cases, people are just using the theme of AWE to figure out the status quo. Oh well that’s what commonly happens when people start out thinking their shoot-from-the-hip, bumper-sticker-slogan-level-of-reasoning, should be applied to a mature industry. I remember hearing some PhD explaining in some Ted talk or something how obviously there is a lot of energy spilling through modern wind turbines because of all that empty space between the blades. Stuff that sounds completely logical to newbies is not even close to reality in wind energy. Doesn;t matter how many degrees someone may have, any more than an advanced degree in music will rescue someone who is naturally tone-deaf, if they don’t know, they don;t know. Some people “get it” some never will. It’s not very intuitive, but more like full of surprises.