A large lifter kite is the most efficient way to support an AWE system. The trouble is that large lifter kites are difficult to autonomously launch and land. My suggestion is to attach drones to the four corners of the kite to ensure that the kite is spread out at all times especially during landing. My original concept was to have auxiliary lines attached to the four corners to control the kite during landing, but all these lines and take-up reels have to be relocated on the ground in the event of wind changes. The use of drones eliminates his problem. 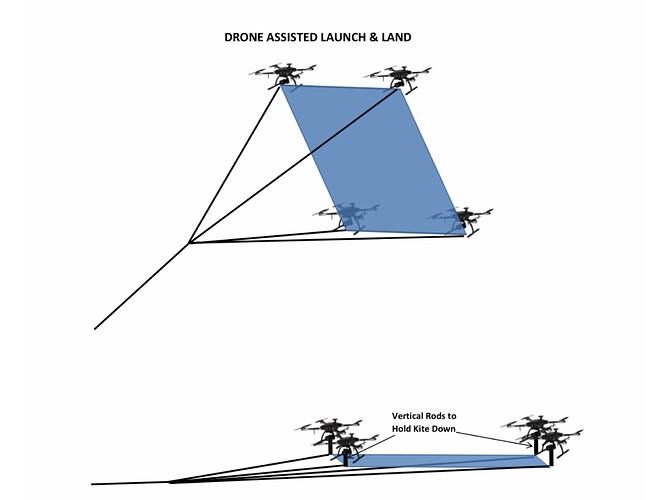 image2160×1620 130 KB
The weight of a single skin lifter kite is not excessive and the drones only have to operate for a short period at high load to lift the kite to an acceptable height where the wind catches, and the kite continues to rise by itself. At all other times the drones will just be idling and perhaps operate in auto-rotate mode. The drones can be recharged on the ground or recharged by a small generator on one of the turbines of the AWE system. During the landing operation we must force the kite down to the ground by reversing the rotation of the drones and it may be a problem to maintain stability of the drones in this condition.

An alternative method is to have the drones docked on the ground and are deployed to attach to the four corners when the kite must be landed. Reliably attaching a drone to a corner of a flying kite is a difficult control problem. With this system, a set of drones can be used for multiple lifter kites in an AWE energy farm.

For example, a 100 KW unit would require a 1300 m² lifter kite who’s approximate weight is about 240 kilograms which includes the bridling, reinforcing and the weight of a kite control steering unit. If we assume a rise rate of 1 m/s then we only require approximately one minute of maximum power operation to raise the kite to an acceptable level where the wind catches it. The lifting load on each drone is therefore approximately 60 kilograms during this period. Incidentally, the tether tension of this kite is approximately 8,000 kilograms at a wind velocity of 13 m/sec.

There is a problem keeping a kite on the ground when it is landed. The leading edge can be lifted up by wind gusts. To prevent this I suggest that we land the kite immediately behind a raised section of the ground so that the leading edge is sheltered from the wind. We require raised sections to be located to match the prominent wind directions.

Perhaps we can use the drones to generate cross-wind action. Even if the drones can move the kite laterally at the speed of the wind, then the effective wind velocity will be 41% higher resulting in an increase in power by a factor of 2.83. If turbines are used, then they must be oriented to face the effective wind direction to take advantage of the increased power availability.

An alternative method is to have the drones docked on the ground and are deployed to attach to the four corners when the kite must be landed. Reliably attaching a drone to a corner of a flying kite is a difficult control problem. With this system, a set of drones can be used for multiple lifter kites in an AWE energy farm.

You could change what the corners of the kite look like to make them easier to attach to, perhaps adding an extra line and weight or a very slack extra bridle to them. You could have a single attachment point. You could also use a kite train instead of a single kite, presumably trading some efficiency for easier control, and smaller drone(s) needed. You could start experimenting with different configurations if you’ve got a drone you can use.