Tired of giant dangerous AWES? This one is quite small and extra dangerous. Take an off-road electric skateboard with regenerative braking, a NASA Power Wing (NPW), and a few odds and ends, and in just couple of hours this is what you get, an operational-research prototype for informing self-charging polar-windsled design. Total cost- 500USD 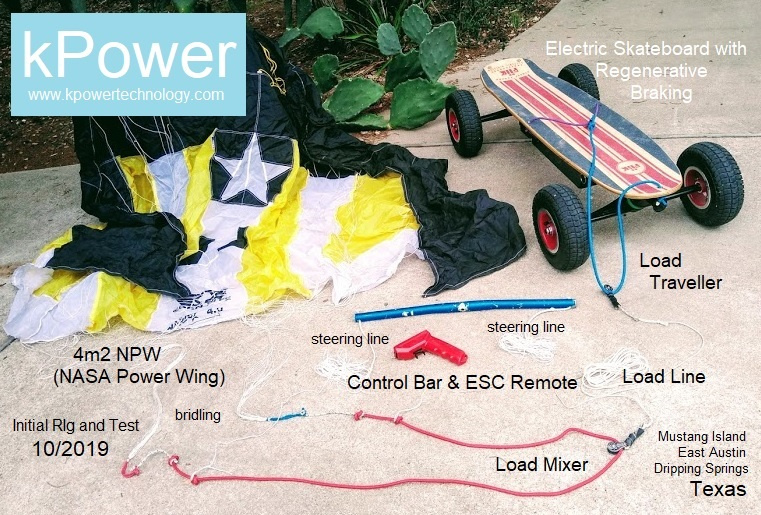 Reinhart’s terrific Peak SS does not come in a small enough version for this EV. A PL Uniq would be the closest such match. The sole practical advantage would be a higher upwind angle. A small parafoil race kite would point even higher. However, the NPW is unbeatable by cost-to-power downwind.

Recently on the Old Forum, powerful Vortex-Lift was identified as the missing aerodynamic performance parameter measured in Delta Kite flight, that no one at AWEC2019 was able to identify. The NPW is a soft-delta, and gets its “grunt” from exotic vortex-lift. NASA got it right fifty years ago as Rogallo, Barrish, and other power-kite greats did hundreds of developmental prototypes.

The NPW therefore not only offers max power-to-weight, but its the cheapest, because its construction is so simple. The kite-board anarchist-punks of Tempelhof Berlin rediscovered the NPW in our time. Space-kite turns out to be cooler than water or snow wings. Its a truck not a sports-car, like wearing boots instead of sneakers.

The NPW is also the engine of the Inuit WindSleds on their Polar expeditions. No one at AWEC2019 had a more impressive AWE wing basis or track-record. Only the KiteShip OL is more radical. Compare with super-expensive rigid wings; one thump, game-over.

Further testing of the KiteBoard EV is helping refine the kite rig and operation techniques. The load-mixer pulley “equalizer” at the kite will be rerigged lower, to not pinch the kite’s two lines too much when steering lines are slacked.

A wholly new launching mode has been found, to launch the kite in low wind. The EV is driven upwind in Reverse to tow launch the kite, then it proceeds in Forward under kite power. This is similar to PG/HG vehicle tow launch in Forward, as if the vehicle then became itself kite towed in Reverse. This is tricky on a skateboard, but should work easier for larger kite-EVs.

One novel mode that works well is for the kite to tow the board while the flyer walks along nearby steering the kite. This will be useful for dragging misc. objects around.

Another low-wind trick when the kite is flying to weakly to initiate EV motion is to use the electrical propulsion to nudge the vehicle to get going. This could help upcoming Inuit WindSled designs break grip on snow and ice, to get going with a smaller kite.

As skill improves, a close interaction between kite power and electrical driving and braking is developing. Mastering a kite EV is not as simple as first imagined, with evident potential to automate some basic control complexities, like the regen braking shunting excess charging power to alternate load banks.

Might find it easier to use the Onewheel XR or pint… Ride a bit of fakey to power the launch then rip it out forward in regen.
I had a very small go of kite flying to recharge an electric unicycle a few years back. It’s kinda niche to say the least. I didn’t use the reverse launch idea… Just flew the kite and walked up and got on the unicycle… Reverse on electric unicycle is weird… I can do it with pedals … more practice needed.

Yes, these little EVs do not handle like their non-electric ancestors, because they are so heavy and have far more rolling resistance, so one’s old reflexes are useless, even dangerous, and new reflexes must be trained. Most old-school skateboard tricks are impossible, but new tricks are possible.

The EV function and kite are added layers of complexity to master. Its weird to do extreme board and kite motions while holding a hair-trigger throttle. It would help if the throttle on my EV was more progressive, less sensitive to initial acceleration and braking.

These rigs may be “niche” now, but they also point to new extreme-sport evolution.

Balance boards like the onewheel or the electric unicycles are a bit more natural feeling to work for breaking operation than a trigger operated board… They work via accelerometer sensing how much tilt you are putting into your feet. Lean forward and they accelerate forward, Back for backwards and braking. So it just relies on balance and core strength.
Would be amazing to have an electric 4x4 low to the ground sense the pull and balance dynamic then adjust the deck connection position autonomously based on course and desired grip…
Problem with all these things rolling whilst resisting a large sideways force… worn tyres.
I shred my ripstick wheels in minutes if I put even a kiddi rig windsurf on it… Lovely to ride like that on a road though. So fluid

The latest electric skateboards are going 4x4. It would be great if the hand throttle was in the kite bar or eliminated.

The cure for shredded tires is bigger tire surface by design, for less abrasive force by area, and to seek kinder surfaces. In principle, enough balloon tire and anchor mass could hold track while not even killing grass.

A kite buggy EV would be a nice conversion, Battery mass in the seat location, and sit a bit higher. The sort of vehicle-connected rig used for the KiteBoard EV would be a step forward for a KiteBuggy EV, from having a buggy kite pull from a body harness. A dune-buggy-style roll-cage would also be smart, as roll-over mass grows.

Just bolt a kite bar to the top of that Tesla truck abomination thing which was fashionable last week, maybe a fortnight ago

Practice is paying off. Bought my brothers electric unicycle (he wasn’t using it) and can now get a good bit of backwards… Hmmm maybe I’ll get into trying to launch a kite that way soon.

Testing the Kiteboard EV further, session by session. Some key lessons are not as much kite-related as EV-related.

Tesla batteries use a dedicated heating system. There are specialty batteries with somewhat better cold performance chemistries, but some preheating would still be wanted in Polar cold-

Here is final updated prototype design based on testing. The upper loadpath bridle needs to be long enough to avoid pinching the wing laterally. As originally rigged, the NPW nose tended to collapse during surge. The Control Bar worked well enough, but some tunability with a Dan Tracy bar would be handy on some less-used “points-of-sail”. Integrating the EV throttle and settings buttons into the bar would be a final refinement. The regen braking could use a settable input. More EV charge instrumentation would be helpful. 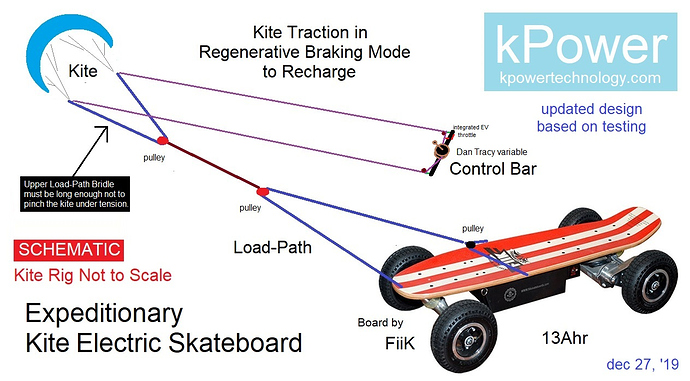 I may soon be trading this EV for a used paraglider and harness, as the safer activity

Because of wrongful moderation restrictions on my account, I could not post any more on fig5 topic, so posting here, as the EV skateboard regen capability is involved.

The latest twist is that common regen is not automatic in back and forth pumping, but the ESC must flip between forward and reverse for two way regen. A robot hand to operate the ESC control logic would be cool.

Video clip shows typically relentless kPower testing progress, by many modest steps, over many years. Still refining geometry and details. In an almost infinite design space, converging on optimality is slow but wondrous.

Lots of great crosswind pumping now, but this is the only usable footage that the random children videoing today managed. Mom emailed kPower the clip. kPower expensed ice cream for all (which Google was too cheap to pay for; they are not even in AWE any more, citing cost).

Fig5 full rig for Austin Zilker Kite Fest next month should be in the sweet spot.