More details (In Dutch, try Deepl to translate it into English):
Experimentele vlieger

Our managing director commented: the explanation “…dit is gewoon overmacht.” is a weak excuse. (in English: the reason for the crash is “Force majeure”)
You should have an algorithm in place that steers the wing back to the launch location if the tether ruptures. Ok, we don’t know, perhaps such an algorithm was implemented, but the hardware failed.
Waiting for further explanations from Kitepower…

According to the article the wing fell with its tether. Where did the tether break? For yoyo systems the tether wear occurs at the winch level due to permanent reeling out and in. But now the cause of the crash is not still known.
Let us imagine the same scene with a one-ton rigid wing dragging a 800 m tether catching everything in its path…
Perhaps this sort of crash risk cannot be avoided by using a crosswind kite with a single tether.

Crosswind kites accumulate unreliabilities, above all as they scale up: high wing speed, high strength, long tether moving fast, actively controled paths of flight. The computerized system cannot save all.

Cultural anthropologist Genevieve Bell explained to the Wall Street Journal TECH site that extreme, fearful reactions to new technology are age old, and have even picked up speed alongside our rate of innovation. Critics of early steam-spewing locomotives, for example, thought “that women’s bodies were not designed to go at 50 miles an hour,” and worried that “[female passengers’] uteruses would fly out of [their] bodies as they were accelerated to that speed”—which, for the record, they did and will not.* Others suspected that any human body might simply melt at high speeds.

As strong as it is (>100GPa axial) for scaling - UHMWPE has a consistent melting point.
A tiny wee kite with sewing thread can easy cut through a large competition kite line…
just by running along the stronger line at the one point, the thin thread cuts through the stronger line with the heat of friction.
Melting point is a weakness which needs considered where you have running line.
Pulley sheaves have a lot of energy imparted to them under high tension.
(See kitegen patent on variable capstan groove low friction winch pulleys.)
Any manner of line handling / sharp fault may have happened… Would be good to see the forensics.

This crash is not cultural. It is a reality.
Generally developpers of new technologies take some lessons from failure, above all when it is forseeable. Some of possible risk factors were studied Barnard's predictions. Anthropology has nothing to do with this.
It would be more fruitful to examine if the same power efficiency can be obtained by eliminating some elements of risk when it is possible, concerning both the AWES and its process of realization.

As a collorary to my views on not sharing crash statistics before going commercial, those non commercial activities should not risk damage to «civillians». Its a hard thing to ensure fully, but at least such events should be very unlikely.

Any actor not conforming to this philosophy will eventually cause a lot of harm to the industry, probably more than the gains made for that particular project 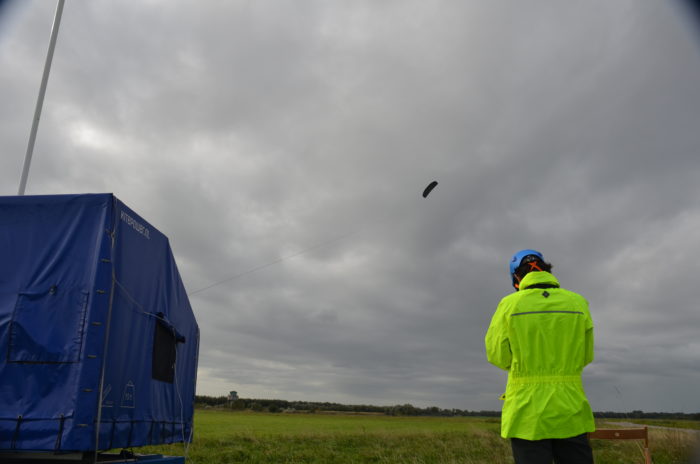 On the 30th of May 2019, a kite prototype was tested in high wind conditions. Due to an unfortunate series of events the main tether failed, allowing the kite to drift away.

Indeed. I will try to find out. Was working for Kitepower in the very beginning. One aspect is the question of the security factor (tether braking force divided by max expected tether force).
I always suggested a value of three, but other people said that two might be sufficient.
Other aspects:

I will ask these questions. Lets see if I get a reply.
Uwe

Thank God no one was hurt! This sort of accident was technically predicted for a long time now, by kPower, in our Forums. In summary, single-line AWES topologies present a single critical failure point, counter to aviation design best practice. Multi-line and Networked Kites are topologically favored.

KiteGen’s original frazzled lines, which I inspected first hand in 2011, confirmed that crude reeling, as KitePower and many others do, quickly ruins kitelines. Since then PR-image analysis of AWES reels shows premature damage again and again. Kitepower was specifically recently critiqued, in detail, for poor line condition, poor fairlead design (not as bad as KPS), and poor level-winding.

In high wind, there is no way just KitePower’s control pod and remnant tether mass was enough to bring this kite back upwind under control. At best a downwind landing in a secure area might have worked. A dragging tether should cutaway at the kite, and/or a kite-killer deploy. These are old issues on the Old Forum. KitePower is now grounded by their apparent lack of adequate fail-safes.

Makani’s M600 is potentially far more destructive and further vulnerable by its high-voltage tether, with many such critical M600 failure modes identified on the Old Forum. It was possible to boldly deduce at least one major crash covered-up crash Makani crash from clues, that was later confirmed. GoogleX can afford to crash, but a single tragic crash has killed many a small aviation company. Many AWE commercial developers willfully and wrongly rely on secrecy about crashes, despite the noble aviation tradition of open crash reporting.

Count on poor aviation safety and insurability to vet the AWE field of many weak players. Energy markets cannot afford the aviation fail-safes that high-complexity AWES designs require. To deliver high performance economically and safely is most practical with low-complexity methods known in professional power kite fields. They don’t have to wait to know that high-velocity high-mass aircraft classes have higher inherent risks, just as FAA/ICAO regulate. AWE R&D workers should not remain silent about safety incidents, out of professional ethics and legal liability.

We must call out anyone’s safety flaws as they are discovered and condemn greed-driven secrecy that hurts us all. Our best model of crash reporting is NASA’s Pathfinder crash report. We will all prosper better and save lives by superior shared AWE safety culture.

Dyneema start to creep at 50% continuous load. That mean you can’t rely on a 100lbs line to handle 50 lbs continuous but you can handle peak pull up to 100 lbs.
Classic security factor in automotive industry is 3, same for aeronautical.
Wind energy security factor can increase up to 20 for some parts. Due to dependancy between power and wind speed

It’s not likely creep by itself broke the line, but high surface abrasion, based on the frazzled and damaged lines observed on this and multiple other poorly designed reeling prototypes.

Creep itself is a often good thing for kitelines, which come pre-stretched for highest quality. Many fliers fly the same lines for years, claiming they just get better (thinner, less drag, higher unit-cross-sectional strength). While stretched lines are higher performance, they are more prone to harmonic shock failure, a sort of brittle tensile effect.

Line Surface Abrasion gets worse for larger more powerful lines and loads, as higher forces concentrate on the line surface. Nicks and other flaws in the line concentrate forces and localize failure. Longer lines have a greater statistical risk of flaws.

Tether wear for UHWMPE tether is indeed not a simple issue to tackle. We must expect learning to happen in each company and the industry as a whole. Sharing such experience would gain each player for sure, so personally I could only recommend sharing.

That bein said: it you are in a testing operation, crashing within the planned envelope of testing, there is no need to report outside the company. This would probably apply to a possible Makani incident.

There is no shame in sharing crash details, and we can only hope many players will do this, but it is not wrong to not do it.

The offshore crane industry (oil industry) and I’m sure many others have lots knowledge avout tether wear and monitoring. I think part of the problem is in AWE companies ability to digest this knowledge, in terms of manpower, getting in touch with the correct people and also the crane industries inability to share such knowledge at a reasonable price (pure speculation on my behalf)

Commercial fishing and tug-boat operations are the most intensive industrial users of UHMWPE. That’s why I embedded ten years with the legendary fishing fleet of Ilwaco, on the US NW Coast, to master their unsurpassed domain knowledge, from kW to MW scales. Power kiting and yachting are also cultures of UHMWPE excellence. Don’t count on the average AWES venture for much vital art. UHMWPE is an amazing technology that takes amazing skill to get the most from it.

The AWE field is now big enough for the set of safety outcomes to cover all major possibilities. There is “good, bad, and ugly”. Our first AWE field fatality is probably only a matter of time, and there will likely be a scandal to the backstory. It will then be clear to all parties that crash-report-optional culture is dangerous, both internally and externally.

Venture capitalists lack the public-minded objectivity to self-censor crash statistics, because of commercial conflict-of-interest. They can only partly get away with covering-up risks and crashing from investors, regulators, and the rest of us. If they persistently hide fatal flaws in operations, eventually the worst happens. Safety data must not be private IP.

Investors are advised to divest from the more dangerous ventures and architectures, as measured by standard flight-risk criteria like mass, velocity, and complexity.

Why, that’s Fort Felker hanging in the air! That crazy cat has nine lives, I tell you.

When Makani crashes in Texas, they are forced to produce a report with any random redneck. Told you the electrical tether was a particular concern. Good try, but this document is just not up the NASA crash report standard. Kite Power’s report should fall somewhere between Makani-in-Texas and NASA here-