Just come back in from a test on the Common Grazings land above Swordale, Isle of Lewis.
And it didn’t all go well from a structural integrity point of view.
The test was of a dual ring stack using rigid blades on the rings.
Very quickly after starting to get up to speed and power, something , possibly the transmission from the top driving ring, seems to have snapped one of the main ring tubes…
I let it keep running for a while, as it was still generating and it was interesting to observe the performance degradation. ~ 20 seconds or so later… 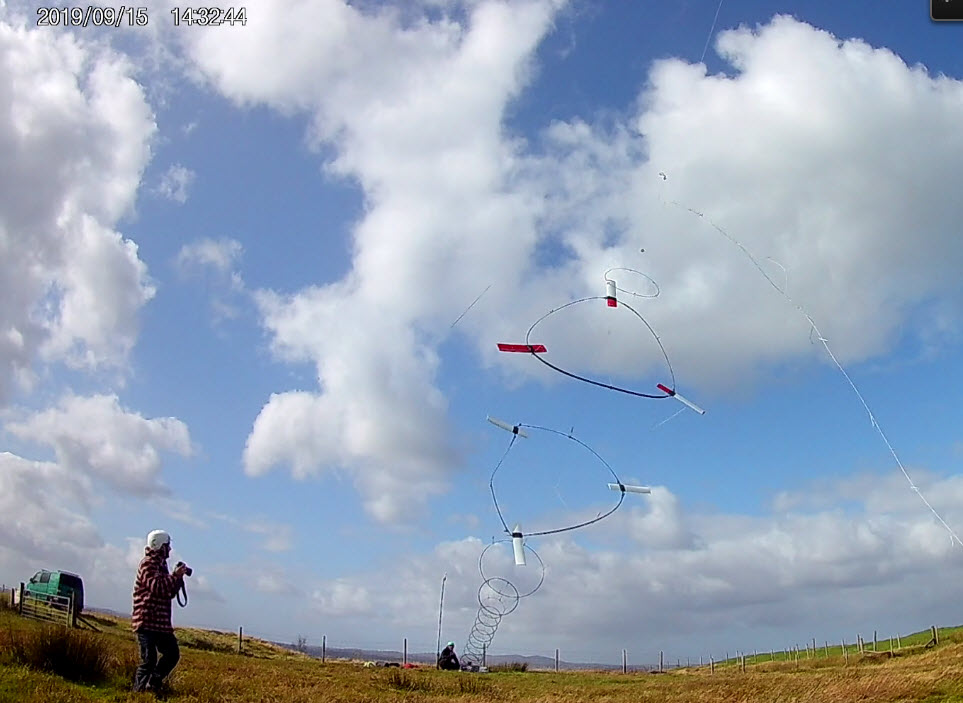 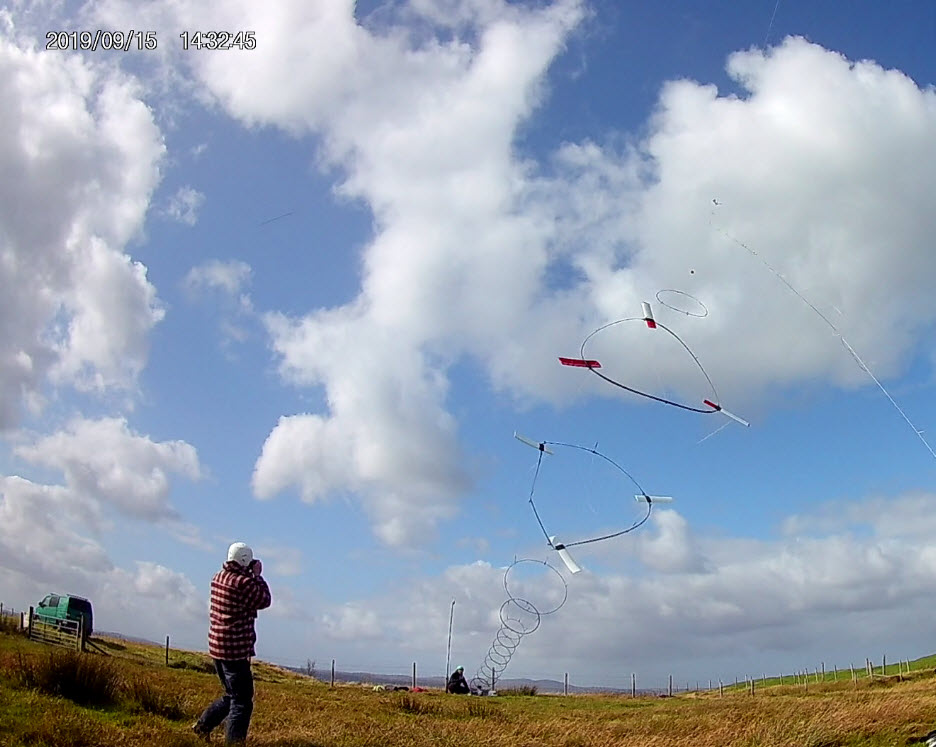 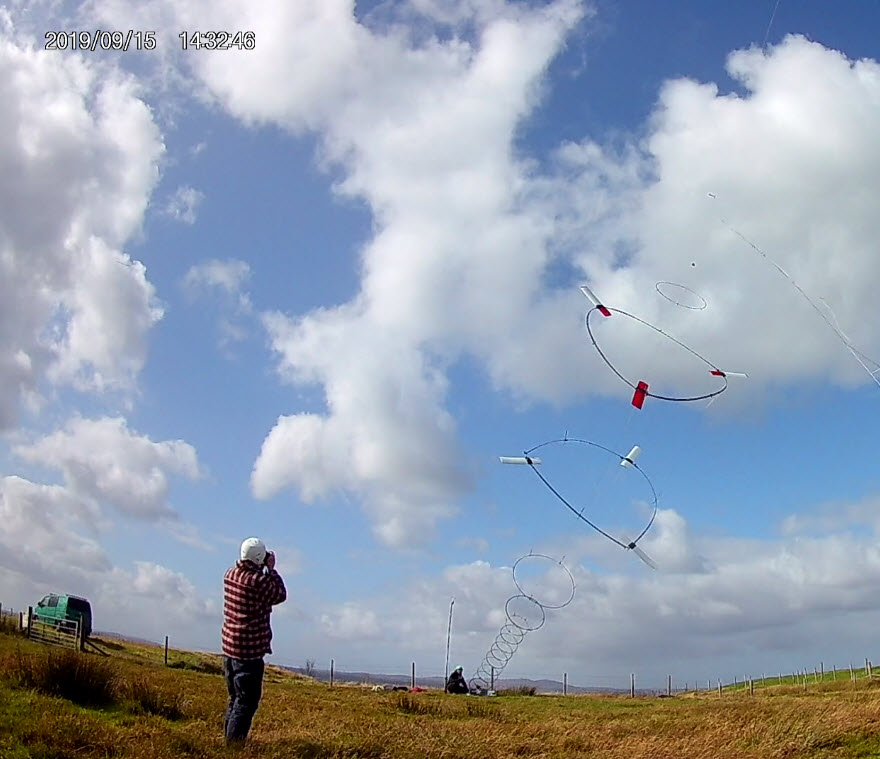 Quite a throw.
The turbine keeps running despite losing the tube… The driving rigid kites are set up with ~70 span outside of the ring… I suspect this may have had a strong influence on the snap as it would impart a significant moment … maybe a 60/40 in the next build… Also there’s quite a lot of flex in the blades… huge loads at the speed they were going.
Can’t wait to really chew through the data…
Thought it best to report this… a heads up (with helmets on) These tubes may need tied internally like the ones on the wings to compress and help prevent this.
Kept running the turbine for a while… More snapping later…
Still going
Bit worrying that we didn’t notice the tube was missing until long afterwards. We found it. 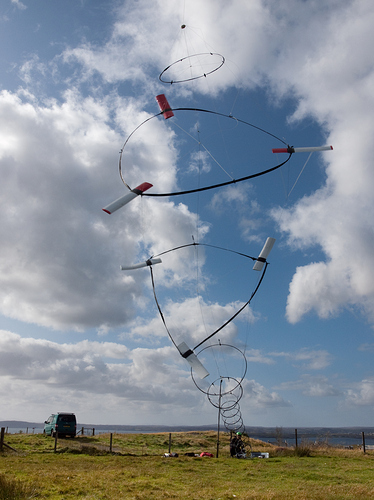 Wasn’t the only test of the day with a less than ideal outcome.
Learning was also hard won on a second test configured using the single red & white ring.
It was driving despite the brake even before we let it spin up…
Very quickly became a TRPT crusher. Will check the data but I suspect my latest software revision wasn’t backing off as quickly as previous versions. There was also a really odd anemometer reading issue. 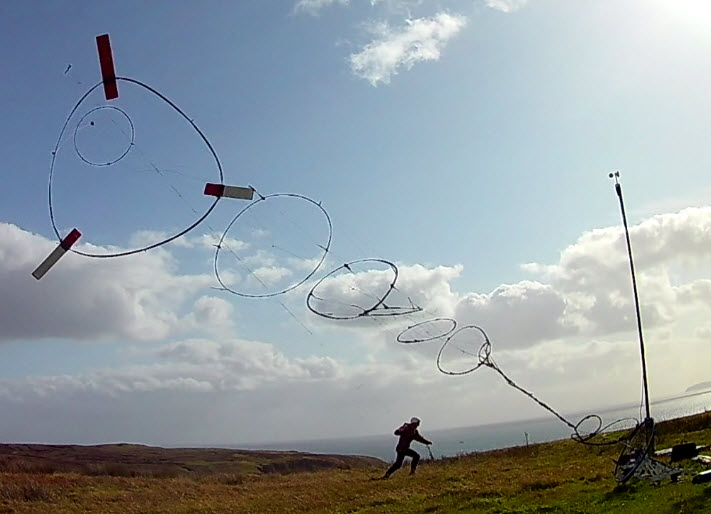 Its difficult to say anything sensible about what happened, but could the inner ring be moving slower, causing the blade tips to be lagging behind, and then rotating outwards?

In the TRPT collapse. (Single Ring Test) It looks like it was caused by a whole stack vibration causing the stack length to shrink and pulse…(looked a bit close to hitting a harmonic) The tracking of the base station was swayed off alignment.

In the dual rotor stack case… Still no idea

There are no inner rings… (you mean lower right?) if anything it looks to me like the lower ring wing tips are flying ahead of their own ring… Snapping their trailing edge rod …

What’s really cool about this test is … torque transfer between kite ring levels using only tension and soft material is working as there is no rod in place. Kinda holy grail cool really

Tensile Rotary Power Transmission It’s @Ollie’s cool term. There was a podcast which mentioned the kite turbine recently and described it (audio) as looking like a giant slinky in the air… Not too far off

Of note in comparing the two tests yesterday.
The first test with 2 rotors was double the power without causing as much wobble and it didn’t destroy the TRPT.
Single rotor seems more prone.
In the single rotor test, the rotor only had 3 lines to the next ring. This will cause uneven tension in the TRPT lines and make deformation and asymmetries appear.

So I guess the pertinent question now is…
Where is the common incident reporting framework for AWES?
In this case … It’s probably not the EASA
This test was run below notifiable height and weight for a kite system. (I did call to notify the local air traffic control before and after the test.)

This issue is mentioned in earlier threads

If an AWES prototyping or science benefits from state funding, do you presume there is a standard for reporting the findings of that r&d which are important to the safe deployment of the technology? Possibly not. Maybe the case could be argued that reporting would be detrimental to the public investment or the company IP. Aviation authorities globally report on standards and accidents … But which relevant bulletin pages should we scan and repaste here? Anyone suggest some search pattern data …

Has there been any further explanation on the failure @ufechner? Again, having seen an incident where 7 of 8 AWES lines failed, I thoroughly recommend using network architectures and avoiding running lines for safer AWES. In my incident the upwind lines cut each other. It is very easy to cut or melt UHMWPE line.

I doubt any framework is in place. One place to start would simply be to create a template for such a report, and then create a thread in a new “Accident reports” section in this forum. In this way at least we can share these, with little effort.

Excellent… lets do…
Could be tricky to formalise categories , pilots, ground crew, time, power or area of rig , power of gen, wind log, certificates, permissions, altitude, nature of incident, root causes, results, advice, video, photo, 3rd party reports and involvement…
How much detail and how deeply the report goes will depend on the will of the company filling the report.
Airborne Wind Europe has a shared resource for this. As mentioned in


A really good incident report for the benefit of the AWE community.
Introduced in…

After carrying out an extensive investigation and sharing its results with the Dutch National Aviation Authority, the local authorities and the European AWE consortium’s (AWEurope) safety group, we are now able to publish a detailed report of the incident that took place during a Kitepower flight test on May 30th 2019 at the former Naval Air Base of Valkenburg, Katwijk (ZH), and hope to give the right means to the AWE community to reflect and learn from it. The report is made available at https…