This topic is to discuss the social and environmental dimensions of AWE as a world-changing technology. 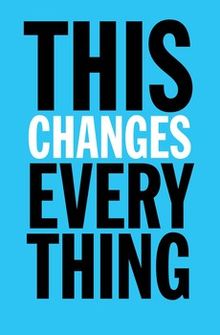 This Changes Everything (book)

This Changes Everything: Capitalism vs. the Climate is Naomi Klein's fourth book; it was published in 2014 by Simon & Schuster. In it, Klein argues that the climate crisis cannot be addressed in the current era of neoliberal market fundamentalism, which encourages profligate consumption and has resulted in mega-mergers and trade agreements hostile to the health of the environment. The book debuted on the New York Times bestseller list at number five on 5 October 2014. A documentary based on t...

I «started» this split thread by stating one should avoid doing business with China due to their poor human rights rapport.

Now I feel a new issue is mentioned which is who is in charge of the damage which is global warming. No doubt Norway played a huge part in this issue, both directly and indirectly. Let any outside player boycott Norway for these reasons, though it does not make much sense to me. My feeling is that Norway is at the forefront of actually dealing with global warming, though a history of being reliant on the oil industry makes global warming a particularily difficult issue for us (as a country).

Anyways, I feel the discussion of blame wrt global warming is not relevant to AWE in general…

Norway is an odd duck, voting in modern times for its Monarchy, and it had its evil Quisling, so its not an ideal model to substitute for the Chinese model; they are both troubling. Nations are a buffet; to partner and boycott selectively. Blame is not social justice. Let there be reasonable retroactive reparation of CO2 injustice by the responsible sectors.

Boycott of “Norway” is absurd, even if Ragnorok is a top Chinese import-wing case. Red Bull would be the logical target. When are they going to fund AWE kites instead of playboy events? King Harald V should have a word with them; earn his keep.

Please beware of characterising a country as a whole.
Let’s use lessons from the past to inspire aspirations for the future.
I’d recommend never to let market economy be your sole purpose but do attempt to encourage the proliferation of goods beneficial to the environment whilst encouraging global citizenship

Geopolitics often involves how countries and other groups are characterized. We see distinct characteristics in AWE’s geographical development as well. Let the data also be faithfully honored, when it shows “national” trends.

Norway is a great duck, if still rather odd. There are other classifications available to us, like social class, East and West, North and South, that are strongly reflected in AWE R&D.

Why have you proclaimed statements as fact there @kitefreak?
Do you want a closing - polarising - winner takes all - zero sum approach to AWES and geopolitics?
Should we instead try to ask?
Ask if you can genuinely corroborate statements.
Can we find better developments, fit for the needs of many, if we keep our paths and interpretations open?

The fear of a winner-takes-all outcome in global AWE has abated since Google flubbed its AWE IP and down-select, and Shell bet with them. Thanks to everyone who shared invalidating prior art to monopolisitc IP claims.

The powerful polarizing of the AWES community first took hold when insiders formed AWEC in secret in 2010 and took over conference planning and US-EU government lobbying. Its unfair to blame the outsiders for wanting answers and reforms.

Anything posted here is not in the same league as AWE’s commercial venture errors. Anything not censored here is the free-speech blessing Tallak has invoked. AWE is mostly about technical success, and AWE Geopolitics follow from that. Open-AWE is the free-speech side of the success, not the enemy.

Let anyone discuss AWE geopolitics better than my efforts. Moderation for moderation’s sake is not my strong suit. I side with Ivan Illich in these matters.

The current geopolitical state of AWE is that the Global renewable energy crisis is real. Progress is far below the metrics needed. AWE R&D can make a real difference, but its been more of an elite venture club than a global effort. Research biases and inequalities are seen in the statistics.

Militarized AWE is a major geopolitical factor, that only a scrupulously-open ethics discussion can properly explore. There is no public discussion of the AWE Military Moratorium concept by the insider circles, but lots of complicit acquiesce. Are the dissenting views to be censored here? AWE could be a way to transform military lethality into pure humanitarian response, with an AWE military moratorium agreed on by an enlightened community.

Commercial competition between players is not strongly geopolitical. It does involve open business criticism for investors to assess. Such critique must not be suppressed in the guise of moderation authority, as is happing now. The largest multinational AWE players are fair game for geopolitical criticism or praise here, while the worthiness of small players is better left to other topics.

I think the big difference in Quisling vs China as a nation if that noone in Norway would support Quislings view (no normal people at least), being tied to the war some 70 years ago and Quisling being a Nazi.

The events that took place in China though, are still largely undealt with by current Chinese government, and I guess we should expect the same thing could happen again.

I dont have a particular thing against China. I might as easily boycott USA for their views on torture of prisoners and the current government’s total disregard og the global climate problems (in spite of being both one of the richest in the world and the highest polluter per capita).

These would be my personal reasons to not do business with either of these countries. Doing so still is surely not illegal, and perhaps may even be justified in spite of my concerns.

If open information follows connectedness, (which seems to depend on the manipulation of the communications platform) then the Chinese people seem to be the most well informed in the world. (they’re all connected to wechat and you pay for anything on your phone)
So the technology exists for Chinese people to guarantee group authenticity of transaction… So lets say you wanted to reformulate governance.
I don’t see a real driver for it… But there’s nothing other than network control to stop it.

We were in China last October. Amazing place, what an eye-opener.

Hmm. What on earth this has to do with AWES… well ok kites could make an open comms network to usurp control (aye right)…
There’s no reason for Chinese govt to block AWES progress. Seems like an ideal nation to push development forward. It is a shame however that a lot of open AWES work is on youtube and Google drive and blocked inside China without a vpn.

You’re all being too naive about China I think. The one million + Muslims in concentration camps should be your go to example of human rights abuses right now. Look into rampant corporate spying and IP theft, and the discriminatory practices against foreign businesses trying to do business in China. The government has taken a turn for the worse in recent years, unfortunately.

China is similar to US with respect to the gap between super-power official policy vs what most people want, or the scandal of large prison populations, and many other problems. We share EU colonial and neocolonial legacies. The US has intervened in EU twice to put down all the Quislings, but we can’t expect EU to do as much for us and China, not even meaningful boycotts. We must resist wrongful conditions as best we can internally, while also working rather unnoticed on AWE R&D.

EU AWE R&D seems very class-driven from the outside perspective, even if EU itself is more diverse and less unjust than China and US. Google-Makani’s venture-capitalist model seems to have taken solid hold among an elite insider EU circle in central control of event planning and capital, rather than a true Open Community. Not at all a geopolitical business complaint, because crony-capitalism makes EU AWE less competitive in the long run; a self-limiting dynamic already taking its toll.

At least US and China AWE R&D is not Makani-Shell PR-distorted research; that venture recipe has been adopted by…Norway, who also now fills the AWEurope lead position, by the KiteMill CEO. Let them boycott China and US to look progressive. No that, won’t happen. Its really just a small inside club minding its own narrow interests.

There will be keen interest in whatever KiteMill does, given the overlap of AWEurope and Norwegian Makani-Shell factors. Its hoped Thomas Hårklau and team will be fresh blood and reverse the isolationism the AWEC-to-AWEurope club has allowed to gradually take hold. We need a Prince Olav reforming AWEurope, not a Quisling acquiescing. Mixed signals so far…

A decade ago there was a lot of EU venture optimism for rapid AWES commercialism and deployment to poor emerging economies. The failure of these hopes by technological incompetence owed to an elite academic top-down venture-capital cultures unable to engage marginalized end-users as equal partners. This is emergent AWE geopolitics, not based on nationalism as such.

Did anyone read Illich? Wubbo Ockels’ idea that we can create AWE in various socially desired forms seems to bear on what AWE’s rich and poor communities separately need and desire. We will see both kinds of primal impetus progressing to contend for the bulk energy market, with some ultimate remix prevailing.