Hung-Loops Fences
The family of hung-loop fences is up for discussion and development.
All manner of fault-finding is invited. 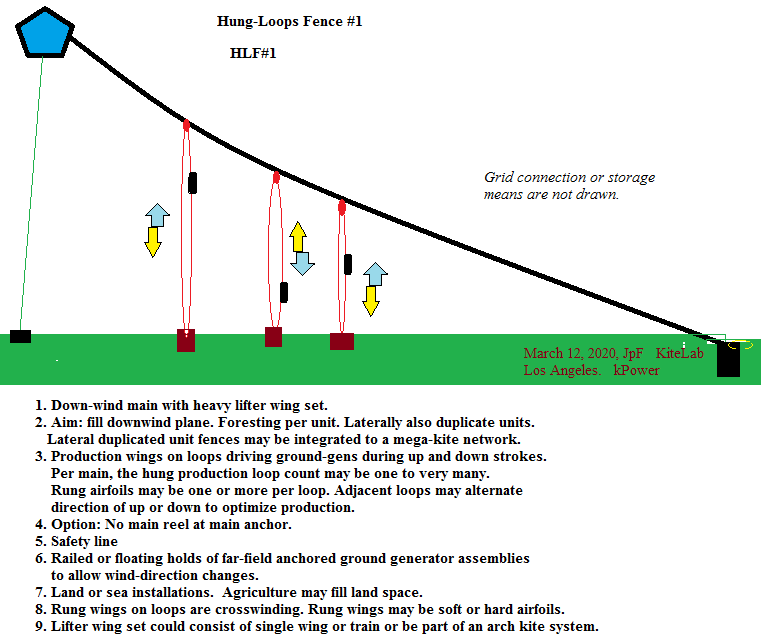 Notes over the Hung-Loop Fences

Hung-Loops Fence #1
HLF#1
Rod once shared the following video in another topic. I repeat the video in tease that the rung wings of a vast forest of networked Hung-Loop Fences may be adjusted for optimal positioning for production of energy.

Edit for adding option for a two-line main tether assembly featuring robust rung wings working in reversing mode (not go around which would be another option): 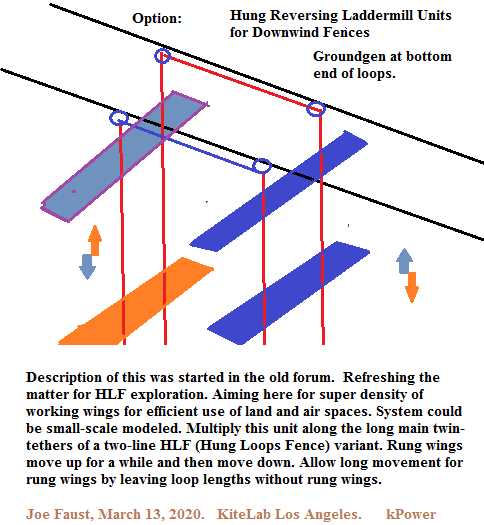 A description of this was started in the old forum where it was noted that the rung wings stay during their course crosswinding while facing the wind front without loop slanting downwind as the 1968 Selsam laddermill (non-reversing loop) did. I am refreshing the matter for HLF exploration in this topic.

Aiming here for super density of working wings for efficient use of land and air spaces.
System could be small-scale modeled.
Multiply this unit along the long main twin-tethers of a two-line HLF (Hung Loops Fence) variant.

H Joe:
I was noticing the previous alternating-dual-pull configuration you outlined had similarities to a laddermill-type configuration, and of course in my mind, there are two directions laddermill could go:
a) “morph” to a SuperTurbine™ (as in “all roads lead to”)
b) actually be built and tried.
Seems strange to me that nobody, (including me) has ever bothered to build even the most rudimentary laddermill.
With all the millions spent on AWE, the hundreds (or more) of talented people participating (or now let’s use pastence: participated), over a decade of this hype-cycle, and the early publicity enjoyed by the laddermill concept, and excitement generated, yet never built or tried, it just goes to show there is an abundance of unexplored configurations. It seems impossible, yet typical, of “AWE” (partial finger-quotes?) that such a configuration could be so celebrated then never even tried. Whoa.
That said, there has been at least one multi-tower-based horizontal ST tried, but for some reason it did not work out. Doesn’t necessarily disprove the concept though.