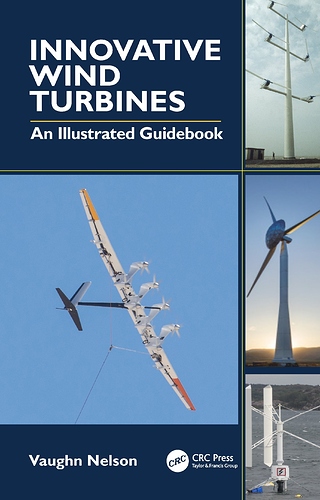 Innovative Wind Turbines is a tribute to the inventors, entrepreneurs, researchers, and companies that through their efforts have envisioned, designed, and constructed models and prototypes for wind energy devices. There are numerous concepts and...

I was grateful for being included in their book. The authors have always been friendly and helpful contributors in our U.S. wind energy circles, and really know their stuff. Looks like they got the prototype in the picture mixed up with the 3-foot diameter Sky Serpent. I think the one in the photo had twenty-six 5-foot rotors. It was only run as a demo - when a crew from Discovery Channel says they plan to come and film, you want to have something that looks at least visually-impressive to show them, never connected to a load, but should have been capable of much more than 1.1 kW.