I’d like to see a kite driving an intermediary generation system in an offshore environment. 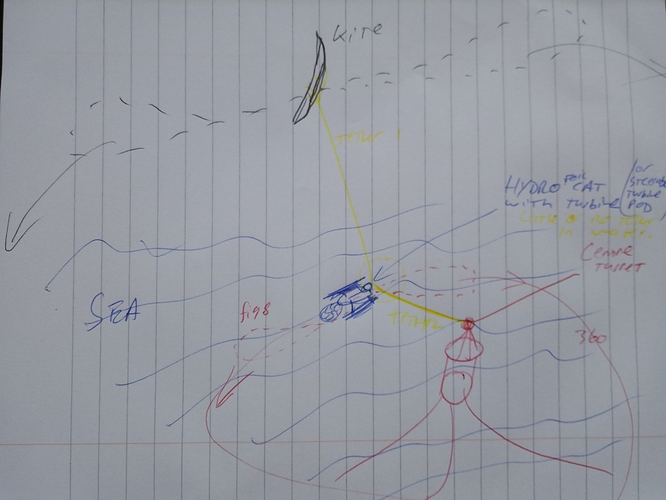 This could be network kite or single kite.

The turbine is not airborne.
Instead the turbine is being dragged through water.
Turbine being the blue bit in the water in the picture. Yellow is the line from anchor spar buoy to turbine to kite.
The turbine attitude to water is supported by a glide controlling frame (Like an otter-board/catamaran hydrofoil/submarine doodah)
Topside of the turbine support is tether handling to keep the kite tether clear of the water.

So the kite can pull 8’s all day long no matter the wind direction.
& the pulled pod/turbine-sub can follow with 8’s tacked through the water.

This configuration could be steered to lower the variation of phase power output of yoyo.
Could have a very efficient turbine and generator size from water speed and density.
Could have very lightweight airborne components (Likely soft too) which could be recovered to the water.

Do away with submerged cable drag by using a hydrofoil catamaran. Mount the turbine between the foils facing front to back. Tether the catamaran from a turret on the deck to a cliff (or a moored floating tower) above the water you drag through. Control the kite from the deck turret. It’s a weird mix of sailing arc sweeps with figure 8’s ends. Gives good long power sweeps and no retraction phase.

This looks to be the same hydro system, isn’t-it? Interesting, but how do you assure a constant gap between the hydro cat and the anchor?

I knew I’d mentioned it somewhere… more or less the same yes…
There are quite a few advantages to reap from such a setup.

Its an interesting design. Have many kites, then have maximum altitude around where it just passed downwind, then use the altitude to help the kite travel 360 degrees. 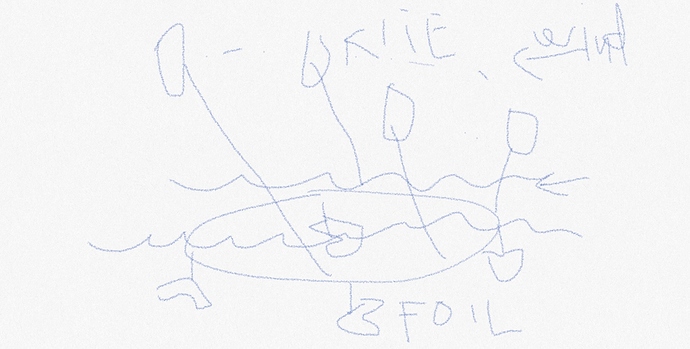 Sorry for the poor drawing

@tallakt, on an already old comment I attached this file: hydro-carousel-figure-eight-rotating reel-Daisy.pdf (156.9 KB, and 5 pages). I think this could have some similarity with your design, while the current @Rodread’s design is quite different as there is no carousel for what I understand.

Nice @PierreB I would think instead of having a cone to centre anchor… You’d want to fix the ring and have another ring ontop so as to ride carriages over the top ring… Rather like fish farm floating ring tech.
The plastic pipe they use to make the large structures is so cheap.
Lots of it is wasted by poor practice and just washes ashore.

Another model … A step backward to the swinging from a post model and away from the multi kite around a ring model…
If this nutter dragged a turbine below him
I really don’t fancy this for some fairly obvious reasons. Spreader bar anyone?