I took a look at Kitemill, wondering how silly it might be. But I decided it looks like maybe the most promising kite-reeling idea, since the airplane can return quicker, in straight flight, for the next cycle. Still, I have my doubts about the entire reeling concept, but I guess we can’t quite totally rule it out. But here’s why I’m skeptical of the whole concept: It has to do with comparing an airborne version with a ground-based version. So much of AWE is debunkable without leaving the ground. For example Magenn represented a more expensive version of the least-effective type of turbine commonly used (Savonius), a big red flag for anyone with any real knowledge. And it also had a low amount of working blade area for its size.
Let’s look at a ground-based version of “reeling” (yo-yo): Imagine a wind turbine on a tower. You mount the whole thing, tower and all, onto wheels so it can roll. You eliminate the tower-mounted generator and substitute a reeling mechanism with its gearbox and generator. You allow the turbine to run unloaded, rolling on the wheels due to thrust force only. How would we expect THAT to work? Well, honestly, it seems pretty “Rube Goldberg” right out of the box. First point: The LAST thing you ever want to do in wind energy is let the rotor spin unloaded. That’s how things break. Watch some youtube videos of exploding turbines that run away - smack - boom! The second thing is you already had steady-state rotation but ignored it and now are using the thrust force instead with a reel and gearbox, to eventually reconstruct a rotation, but too bad you threw rotation away when you originally had it. I don’t have numbers handy to disprove it, but it seems like throwing away rotation is to go in a bad direction, and trying to get it back through reeling and gearing just seems unlikely to be efficient or sufficiently effective. Also imagine the ground-based turbine is traveling downwind during its power stroke - again similarly to a Savonius, the least effective type of turbine commonly attempted. Downwind travel reduces the relative wind speed and amounts to throwing away power. So it starts out throwing away both the amount of power aand the type of power (rotation) - bad sign in my opinion. Anyway, the ground-based reeling system I described would be ridiculous compared to just the turbine operating as a turbine, right? So that might be a clue to whether kite-reeling in general is a good concept.
Speaking of Savonius:
Funny but I happened to strike up a conversation with a local resident here in the Mojave Desert who not only owns his own airport, but used to work at Mojave Airport and is friends with Burt Rutan. Nonetheless, he got snookered into buying a Savonius turbine made from two stacked, split oil drums for many many thousands of dollars - I forget how much exactly but it was a LOT. He said it never made a single bit of power and he was unable to contact the people who sold it to him afterward. Typical. I told him too bad he didn’t know me then. I have often tried to save people a lot of wasted money and effort in wind energy. Sometimes they listen, sometimes they don’t.

Also imagine the ground-based turbine is traveling downwind during its power stroke - again similarly to a Savonius, the least effective type of turbine commonly attempted. Downwind travel reduces the relative wind speed and amounts to throwing away power.

Indeed reeling leads to 1/4 Betz limit for a given swept area, contrary to torque transmission or flygen. In the other hand flygen and reeling have the same efficiency for a given kite area, that before loss during reel-in phase.

It depends on what energy moving a windmill downwind creates. I think many would be surprised of the downwind forces acting on a windmill.

A rotating windmill generates zero energy when freewheeling. To extract energy, you need either to slow down rotation or move downwind. At freewheeling and zero downwind speed, you get zero energy. Decreasing rotational speed or moving downwind will start producing energy, increasing until an maximal optimum has been achieved.

If you move downwind, you still need to reduce rotational speed of rotation if you are overpowered. So in essence a downwind power producing turbine also needs to control rotational speed making it «twice as complex».

For AWE, one of the significant challenges seems to be getting the power from the kite down to the ground. Makani chose electricity, a technology proven to transfer huge amounts simply. Some choose to transfer rotation all the way to the ground (Skyserpent, Daisy etc). Yoyo (Kitemill) uses the really high tether strengt along with slow movement to transfer energy. Each of there methods have their benefits and issues.

I thinks its just a matter of exploring the options we have. In theory all methods are sound, in practice there are important differences.

Nice pitch from Thomas at all energy 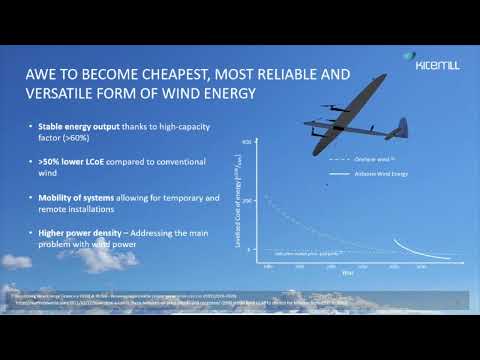 Sounds really good. Seems like their advantage is simple takeoff and landing.
I’m not quite understanding how a 40 m wingspan is going to make 3 MW, if a 7.5 m is only making 20 KW though.
I’d say maybe more like 569 kW?

This is correctly observed. The KM1 was designed now more than four years ago. Although we have made incremental improvements, these are mainly related to robustness. Also the software is far from complete in terms of producing full power. The efficiency (power per wing area) should improve with better kite aero design and more refined software. A new kite design is just around the corner with KM2, though depending on the funding situation

Though 3 MW is a hard target for sure, and we did not yet produce 20 kW with KM1 on average. The goal of our flights are currently focused on flight endurance and low/high wind handling, not power output. So expect a lot of low hanging fruit to be sorted out once we are flying for longer durations

Though 3 MW is a hard target for sure, and we did not yet produce 20 kW with KM1 on average.

Hi Tallak: 3 MW sounds like what people often call a “stretch goal”. If a 7.5 m unit ends up in the 10 kW range, that might imply ~300 kW for a 40 m wing, which would be one-tenth of the stated goal. Well, that is still a lot of power. For kite-reeling, it looks like a good approach.

I could not really go into detail about the realism of these numbers. As you may expect there are some different opinions about how far we will get in the team, but the truth is none of us know for sure. So in a way any number is as good as the other. But the overall picture is the same whichever numbers you should choose.

300 kW for a 40 m wing, and perhaps 3 MW for the same wing with a suitable fairing of the tether which cancels out almost all of the tether drag.

So in a way any number is as good as the other.

Well it does sound sensible that you are not trying to maximize power right away. Establishing basic operation is more important. Wind turbines make most of their total energy on days with just good winds, not exceptional winds, and when they break down, it is usually from very strong winds. Also, when winds are very strong, sometimes the grid is overloaded and the power is not needed.