While kPower focuses on standard power kite adaptations in AWES R&D, no major architecture is out of bounds. Having followed the trend for E-VTOL and rigid kiteplanes, a concept emerged in recent years; to locate the motor-gen turbines in the traditional control surfaces of a kite-glider (kiteplane). Discussion invited. 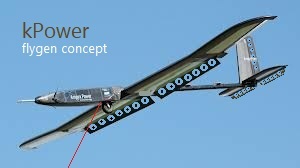 Evident to those skilled in the art, the control surfaces both hide in nominal flight, for low drag, but allow the turbines to be vectored for power-mode, or propeller-modes, for complex low-velocity maneuvers.

Interesting. Twingtec with the props a bit inside the wings are probably most similar.
Why in the control surfaces though? They might not work well as control surfaces anymore.
This is a similar solution for a Vtol plane, with an extreme surface area at the propellar duct though:
https://lilium.com/

The photo and the concept are referenced on: https://groups.yahoo.com/neo/groups/AirborneWindEnergy/photos/photostream/lightbox/1114063701?orderBy=mtime&sortOrder=desc&photoFilter=ALL#zax/1114063701. Sorry for the long and not direct link on the photo: wait and see.

There is a trade-off of extra drag during full control surface deflection against less overall drag than if the rotors were always exposed, like many prototypes. Lillium is similar but without flygen intent, and sets its rotors orthogonal to kPower’s, with full ducts, with higher minimum drag and more mass and construction. Pierre points to an older image that did not yet have rotors on tail surfaces, therefore could not maneuver as radically as the current image.

Rotors could be set in a double-flap, with a clean outer profile for low drag turns while the rotors hide behind or in the wing, mainly for low-wind loiter without gen drag. Many variations possible within the basic placement.

TwingTec’s wing-embedded rotors are larger and fewer, and would scale even poorer, and do not vector, and would develop higher Cd/Cl at high AoA.