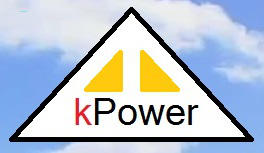 
Couldn’t find them in this registry:
https://www.sec.gov/cgi-bin/browse-edgar?company=kpower&owner=exclude&action=getcompany
They should show up there, right?
kitefreak June 7, 2019, 2:39am #2

I don’t think so. Its a privately owned Texas corporation that does not trade in securities.
It started as a Delaware corporation. I am the CTO, the CFO side of the venture is vacant.

“Company development” sounds uncool here in Austin. We famously believe in voluntary associations based on merit rather than government defined corporations. The AWE quest is about knowledge and skill, and the corporate side is banal.

Let other corporations be better developed, if their AWES tech stinks. Better to win in rags than lose wearing a suit.

Is there any registry with all companies listed for the USA or for single member states?
@kitefreak is there any public official record of this company existing?
I’m used to just being able to look up companies in the EU.

You are asking the wrong person. Ask me about German AWE companies.

You’re CTO of the company. That’s why I’m asking you!^^
If you don’t know yourself, you certainly should be able to find out.

“CTO” here means a chief technical officer in AWE, not a go-to person for corporate data trivia. Nor should a venture CFO be expected to know how each US state offers its public records. Ok, German AWE corporations have easier-to-access legal data, but if their technical directions are flawed, it hardly matters.

Based on its track-record, SkySails is the best German company technically. Yes, they underwent bankruptcy, while kPower did not, but so what? More important is the technical side. SkySails is evaluating a kPower proposal right now. You are wanting to be pointed elsewhere, to public data that has no technical insight on offer.

Oh yeah, sorry! It is the website of the securities and exchange commission. Wouldn’t expect to find every company there.

So at least one CTO in AWE knows about SEC scope. You got lucky. Wish you were more curious about kPower’s technology-driven biz plan, which studiously avoids premature financial focus.

Since you seem to want filing info only, I think it was Craig Verrocchio that first filed the kPower Delaware LLC, and Ed Sapir refiled in Texas. I was not a direct party to those filings, as a focused CTO. 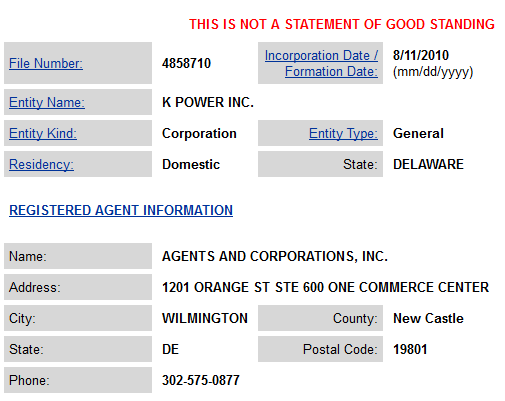 That corporation lapsed in favor of the Texas LLC.

Luke, kPower is interesting, but what about AWEC, the secretive 501c4 filed in California in 2010, whose control passed into Ampyx hands, and the conference part to TUDelft-Freiburg circle, and reconstituted as Airborne Wind Europe (?)

Will you help find out what happed to AWEC? That’s in your backyard, and its a big unreported mystery.

Wouldn’t call it a biz plan if it’s not targeted towards financial gain. Maybe a development or progress plan? I can’t find one on your website.

According to the experiment you once used to determine wether a personn exits, “Craig Verrucchio” doesn’t. https://duckduckgo.com/?q=“Craig+Verrocchio”

Luke, kPower is interesting, but what about AWEC, the secretive 501c4 filed in California in 2010, whose control passed into Ampyx hands, and the conference part to TUDelft-Freiburg circle, and reconstituted as Airborne Wind Europe (?)

Will you help find out what happed to AWEC? That’s in your backyard, and its a big unreported mystery.

Might be interesting. Not so interested in the past though. More interested in predicting the future.
Ampyx and the TUDelft-Freiburg circle don’t seem to be very secretive.

You really are interested in the past, as futzing with kPower filings proves, from years before AWEC. You just aren’t very aware of your selective bias against AWEu’s secret history.

Financial gain will result from whatever AWES architectures prove best technically. Let others prefer to put financial goals first, as they have. Craig has not exited like Udo does; he hopes kPower succeeds, to exit like Udo.

Ask Roland or Moritz or RichardR what happened to AWEC, and see if they seem secretive.

https://mycpa.cpa.state.tx.us/coa/#
There doesn’t seem to be a company registered in texas under the name “kpower”.
It’s not about the past. If a company legally exists or not is a matter of the present. You should be very interested. You’re supposed to be not only employed by that company, but leading the technical aspects of it. Don’t you need to mention the employment or equity on some forms? I’d hoped for a bit more support from you, since you’re all about openness.

I can’t help it if you think kPower was never refiled by Ed, it was. I am helping you as best I can, like with how the SEC is not applicable. Help me with AWEC-AWEu in equitable proportion. I cannot get an answer as to how AWEC’s circle pivoted to AWEu. Both kPower and AWEu are major stories.

Clarification: I am not “employed” (hired) by kPower, but work as a part-owner for an equity-stake. My best guess is that kPower may not show up on rolls due to back franchise taxes, which it may not even owe, for all I know. If so, its a matter of a few necessary steps to reinstate the company in good standing. At worst, we might lose the kPower name (not likely), and if we hurt someone with our toy kites, we could be personally liable. kPower’s business primarily depends on being first to perfect methods of patent 3987987 figs1c,5a.

You should not rely on kPower for profit-first business lessons. Study the AWEC-AWEu business story for that.

You could provide proof. I’ve contacted Ed Sapir via Email.

I am helping you as best I can, like with how the SEC is not applicable. Help me with AWEC-AWEu in equitable proportion. I cannot get an answer as to how AWEC’s circle pivoted to AWEu. Both kPower and AWEu are major stories.

You’re literally claiming to be the CTO of this company. You’ve got a huge stake in wether the legailties around kPower are in order. Your claim to have equity and should have an interest in being able to prove that.
There is more info available about AWEC-AWEu than about kPower. As for how it came about - that’s history and might be interesting, but not that relevant to the future.

I am CTO, its not a “claim”. Claim to be human if you must. You really don’t understand Texas, where petty legalities follow on success. We’ll catch up loose ends when AWE is won, or not.

Google has been convicted multiple times in EU courts, not kPower. Complain to Makani if you will. Has it been legal for Google to cook search so that Makani has long out-ranked Wikipedia AWE in search results? Can the EU insiders really never be liable for all sorts of insider dealings and unfair business practices? Of course they can. We’ll see who gets in trouble. Consider Volkswagen emissions cheating; Texas won a big settlement. You should despise VW and give kPower its due. Texas Law is not hurting you like breathing VW diesel fumes did to us.

Thanks for thinking the little Texas player is the Outlaw, as if we thought you all wear lederhosen

As far as the courts are concerned, the company probably belongs solely to ed Sapir.
The fact that you’re not interested in getting your share secured is evidence in favor of you believing that kPower won’t “win AWE” in your lifetime, regardles of what you want to believe.

As the written record shows, I believe in the honor system, and don’t fear being cheated. You must have the opposite ethos.

If I can help it, I intend for all AWE IP players to be fairly compensated, like the Payne Estate, whose key patents have lapsed: I don’t care if they have. I even advocate a soft-landing for IP holders like Doug. Who else would care? Folks like Joe Faust, Wayne German; the best-of-the-best, morally, and maybe even technically.

There is a powerful business tradition of market leadership based on superior technical practice. That’s the race kPower seeks to win.

I think Ampyx and other AWEC members clearly violated US IRS Law regarding 501C4 conduct, but it would be just as silly of them to worry about that as for me to worry as you propose. Whoever wins AWE will likely have claims to settle; just as Google settles and settles and settles. kPower would pay back taxes, if any.

Luke, please accept that defining AWE by government filings is similar to just listing all published papers. The real skill is to sort diamonds from all the mud. Judge kPower on AWE merits, rather than imagined Texas business norms. By Texas standards, kPower might as well be a Swiss Bank.

A bit of review for, new folks; settled law around the world, as applicable to AWE, imperfectly tends toward fair just outcomes. Our legal rights start from UN Universal Rights, and in the US, our Constitutional Rights, including absolute right to create and maintain Voluntary Associations without government regulatory requirements. The greatest feats of history owe to unregistered excellence.

The world recognizes unregistered associations by abundant case-law; with most of the rights and powers of registered entities. In this spirit AWEIA (AWE Industry Association) never incorporated in any country, but it lives tangibly and enduringly in its supporters hopes. There are also Creator’s Rights we all have; moral rights under international treaty law. It all adds up. If we know somebody contributed to AWE, lets support them, whether or not they filed patents, or their employer screwed them.

Ethical concerns about Airborne Wind Europe have not been addressed. Its first necessary to find out what happened to AWEC in the AWEu inside circle’s hands. This is about how the powerful open AWE culture that created HAWPcon09 had its open conferences taken in secret by AWEC. That’s not dead news, the lack of any conferences outside of Northern EU control is ongoing.

Seriously, there is no public transparency to current AWEC conference planning. Its an invitation-only club with no auditable trail, no open-peer review. Unfair business practices really are happening, as a few hundred millions melt away, much of it public money, with me-too go-go ventures, rather than broad rigorous public research. Don’t even start with Google/Joby/Makani’s inside story, which makes Game-of-Thrones seem like Shakespeare.

Luke, don’t just give the big AWE ventures a pass on their PR. Give them the same refreshing rigor you bring to little kPower’s Cinderella story. Otherwise, we could be comically mistaken as the worst pirates in AWE. ARRR!

If you need proof kPower exists, the Delaware lead did check out. Ed is really busy, but he’ll oblige you. Legendary ship-kite pioneer, David Culp was a kPower founder, ask him, if you have no better question. kPower as a start-up incubated at UTexas, partnered with SWRI (South West Research Institute), then World Kite Museum and American Wind Power Museum, donating prototypes to both. UTexas aerospace has been a long close colaborator, including kPower giving the the first AWE Seminar there in 2009. We won a seed grant from Austin Energy, our local utlility.

We have demoed, tested actually, AWE prototypes at the famous Austin kite festival for years, and at many other large public events across the US, covered in the press. We demoed flipwings at NREL/NWTC, the top US wind research center, where we made friends with Director Fort Felker, now CEO of Makani. We demoed a KiteSat at Templehof, that garnered German TV coverage. We exist.

In summary, kPower is an authentic Texas company. So what. We would be the same thing without incorporation, a huge super-technical kite quiver, endless AWES prototypes, lots of firsts in AWE, the largest circle of top kite pros in AWE, who fly the most, that sort of thing. Open-AWE_IP-Pool, AWEfest and the AWE Documentary are kPower projects. TACO 1.0 could only come from kPower. We Rock.