Land Use Under AWES Operations

Prof Hironori Fuji has previously investigated automated rotary deployment and retraction for antennae in space. I believe he is considering how it may be used on Daisy turbine TRPT’s.

kFarm started as a private airfield and hay farm that became an AWES R&D site for three years. It was shown that commercial hay-farming, cattle-grazing, kites, and aircraft easily co-exist. Integrating kites with general aviation is simply a matter of shared land and airspace, by coordinated operations. Several other AWES programs have validated similar spatial co-operations. Advancing airspace automation will support ever more complex airspace usage. 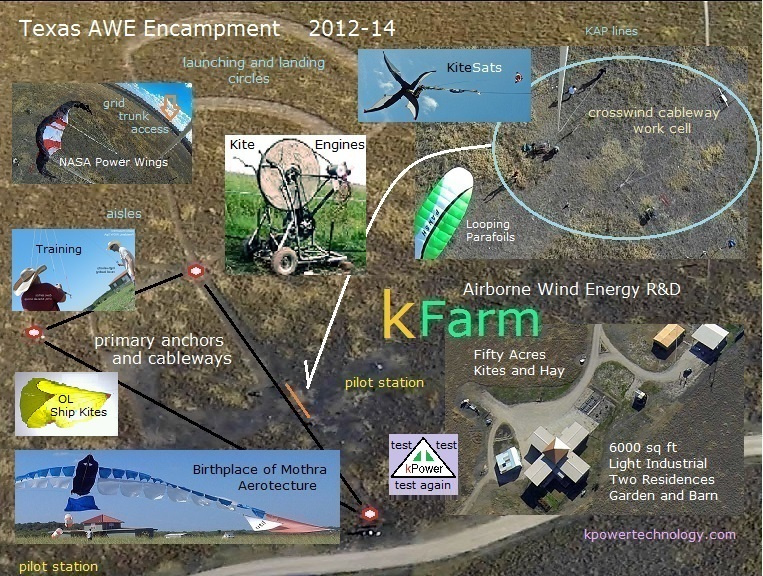 Land is not used intensively in many remote and rural parts, such as where I live.
Alternative land use wasn’t always a top priority for me …
However, everyone has food sustainability considerations at the moment.

In order to maintain layers of AWES and farming, there needs to be physical protection of the delicate biological and delicate kite materials.

The best way to grow food reliably here in our harsh, windy and cool conditions is inside a polycrub.

Polytunnel/greenhouse hybrid designed and built to withstand high wind speeds and the harshest of climates.


At 2m tall there’s not a lot of clearance to worry about. There have been some fairly large arrays of them. The convex polycarbonate shell offers good protection to workers inside. As a bonus the frame is made from recycled fish farm pipes, of which I have removed ~100m from local shores.

Depending on the compliance of your kite device, it could be landed on, bent over and attached onto these shells. Kite rings are pliant when not being flown.

1 more thought. Not strictly land use… Tensile kite lattice frameworks were proposed as an enabler of vertical farming support. Personally I’m concerned the wet mass implications of such design concepts would be a show stopper.

It can be a possibility in some cases. AWES designers, and farmers, could agree on the compatible sorts of AWES and farming.

That said knowing that “A Polycrub is a permanent structure”, the “build typically takes around 50 — 100 hours, depending on size, ground conditions and any internal fit-out”, I would be curious about the price of its implementation on a whole land area of a basic AWES (about 1 km² by taking account of the wind rose). We will likely not see poly tunnels under AWES for a long time…

Polytunnels are a great idea under giant soft kites. Underground concrete bunkers had been suggested in the past for operations under high-mass high-velocity AWES [Old Forum, Feb 9, 2010].

The tunnel form is not only apt to not snag active kites, but could comprise special kite support structures to store and dry kites (solar and/or forced-air), as a giant “spinnaker-sock”, or a long gallery suited to lay out line rigging, or even assemble giant kites on-site. Polytunnels could protect vehicle and pedestrian traffic across a kite field.

The Shetland Polycrub is a particularly outstanding wind-resistant design, based on poly-tube reuse. It could be a ready basis for scaling up Inuit Windsled design. Such structure is inherently lightweight, and could even evolve into airborne service, as an Aerotecture design option.

Commercial pilots sometimes joke, “I work in aluminum tubing”. An AWES pilot might someday be said to work in poly-tubing.