What do you make of the Magenn kites? It seems they are not active anymore, but it the concept completely dead? 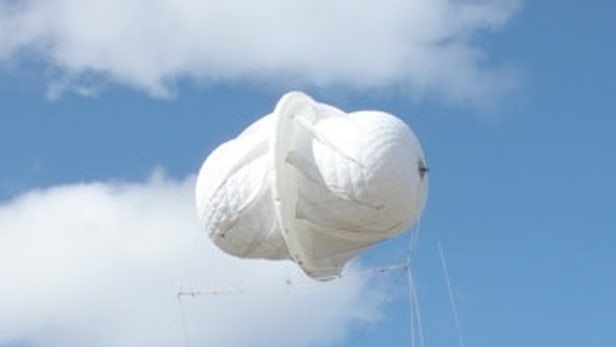 The Magenn MARS system is a helium-filled rotating airship that spins in the wind on the end of a variable-length tether that also acts as a power transmitter, and it's expected to operate at more like 50% of its rated capacity.

In their list of uses, wind energy harvesting comes last, so I don’t know how confident they themselves are about that.

Magenn helium balloon is an auto-rotating device (see also on Sharp rotor) using Magnus effect to add lift and stabilization, and comprising generators aloft. It is a stationary flygen AWES. The drag profiles (Savonius-like) arround the balloon make it both rotate and harness wind power.
The concerns are a low efficiency due to both drag profiles and a low swept area (only arround the balloon); the weight of the slow generators; the helium cost.

Omnidea helium balloon comprises a motor aloft to rotate it, and at a higher speed, increasing the Magnus effect. It is a yoyo system.

Is Magenn not dead and gone for years?
To me this project is over for more Than a decade.
Technically speaking, helium consumption and low performance makes it totally unrealistic.

Thanks for the Omnidea reference. They seem more viable than the Magenn design. I don’t think it would classify to _my_definition of yoyo as it just flies downwind it seems.

And yes, no helium or hot air please.

It just seems noone did a proper intelligent design for magnus effect AWE yet… would it be viable?

About Magenn project it can be said that it is dead, but can it be said that the other AWE projects will be long alive?

I did understand how it works. I gather with crosswind flight you could get even higher forces compared to flying just downwind like the video…

Such a wing/baloon/kite seems really simple to build, just a tube with internal pressure and a motor? And C_l for magnus cylinders go all the way past 9… which by wing standards would be super-ultra-high lift…

Did you mean you did not believe in awe anymore Pierre when you said will the others be long alive?

This paper makes sense to me, and also seems like a viable and possibly better concept compared to many current ones

Thanks for sharing the paper

To tell the truth I don’t know. AWE for electricity production in utility-scale can make sense: better winds, less material. But the approach of promoting efficiency only from the wing area (particularly in crosswind approach) is not enough. The tether length is a big concern, above all when it is a tether under great tension and moving fast. So a whole approach (by the worked air volume) should be studied. That could lead to a less efficient device taken alone, like a Magnus effect balloon, or a stationary kite carrying a propeller. But I can be wrong.

Well actually since produced power is proportional to glide ratio (of kite and tether) and lift coefficient (P \propto C_L G_e^2), the magnus based wing is a bit difficult to compare, because it has way smaller G_e and way larger C_L compared to a foil wing. But I believe that in sum the magnus wing is not bad or perhaps even very good relative to it’s size.

While C_L will always be very good for the magnus wing and always poor in comparison for the foil wing, the number G_e gets worse with longer tether. I am in the opinion that tether drag is of highest importance for single kite AWE energy. An efficient wing is not as efficient combined with a long tether. An inefficient magnus wing is not much more inefficient comparing with and without tether.

The end result is that the magnus based wing could beat the efficient wing hands down on longer tethers. And longer tethers of course is the key to high altitude AWE, which in turn is one of the bigger carrots we are chasing here. (The argument being exactly the same as for a lightweight foil kite with larger surface area and lower G_e compared to rigid wings)

Looking briefly at lift-to-drag curves, it also seems that magnus based wings have their highest G_e where C_L is at its highest (the curve pointing up towards left in the chart). This means that the point where these are both at their maximum coincides with the working point for AWE. This is not true for most wings, and in particular it is a “well known truth” that G_e for many foil kites is worse at high C_L (a truth I have heard stated several times but cannot document myself).

Last, the magnus wing is quite easy to build strong and lightweight, as it could be an inflated cylinder. The cylinder might even be less dangerous in the event of a crash compared to a carbon plane. I would guess for example that even a big magnus wing would not penetrate a house wall or enter a car. Because it is so volumous it cannot even attain very high speeds free falling…

Compared to large soft kites, the magnus kites are a lot smaller and easier to handle due to their stiffer construction.

There are of course some bad points about such wings also, but being the most optimistic person here now (?) I don’t think it necessary to go there…

As I remember, Magnus effect leads to a very high coefficient of lift when the spin ratio is about 3 or 4 (times wind speed). For an auto-rotating device like Magenn balloon, the spin ratio is lower than 1. For Omnidea balloon, for what I know, a spin ratio of 2 has been measured.

I believe a motor would be the best approach for AWE to guarantee the optimum rotational speed at any windspeed (unless this may be sorted out purely mechanically). There is lots of energy to be harvested in AWE for onboard usage. The trouble is just getting it down to the ground. So I dont think power requirements make this infeasible.

a big magnus wing would not penetrate a house wall or enter a car.

The whole message is relevant and the Magnus balloons deserve a serious analysis.
However concerning a big balloon, kinetic energy can occur due to air mass at some (wind) speed like on Solar balloon jumping. But it is not really dangerous if the balloon can be stopped.

The barriers to Magnus effect AWE are many. The effect is obviously very weak compared to conventional wing lift, since skin friction cannot strongly interact with flow compared to the deep interaction of an airfoil with its extended pressure field. Hence no “practical” Magnus use case except curved ball paths in sports.

Magnus Effect scaling is very poor as the surface layer interaction thickness remains small and wind velocity constant. Compared to a single-skin wing, its a double thickness with lots of bluff area. There is the design requirement of keeping a large wingspan spinning in alignment while being bent by aerodymanic force. The cylinder must be spun up in the correct direction to get started. Helium dependence is a particular high cost factor.

Over ten million has been spent exploring Magnus Effect AWE. There is nothing much to show for the investment, not even as a proven dead end, since the failures were not well reported.

AWE: “Land of the (perpetually) Lost”…

The volume scales faster than the useful area, leading to a problem (or an advantage?) of inertial air mass. A solution could be the use of several smaller cylinders.

No helium is needed if the cylinder is stabilized with a disk as for a rotating kite.

Do you mean the “end cap” wing dams as stabilizers? All such structure suffers in scaling. If avoiding helium while making AWE is the goal, the power kite does it better.

Inertial mass is only really a plus for high L/D “penetration” across adverse motion phases, like upwind penetration of a DS wing.

Magenn was never even close to a promising AWE concept. No amount of money and failure can prove that to everybody.

My point earlier was that Magenn’s design did not seem very evolved. But there seems to be a lack of well designed magnus effect AWE