Here in the annexed images an old research, done when I was a young paraglider pilot.
The concept is easy, the solution not the same easy: a «morphing flexifoil wing» able to change its geometry (wing span, L/D, wing aspect ratio, vertical wing speed etc.).
This is one of the transversal activities that I would like to add to the KGM1 research program, in addition to the development of a semi-rigid wing made with three different technologies; uin any case I put the experience done at disposal if could fit on other teams. 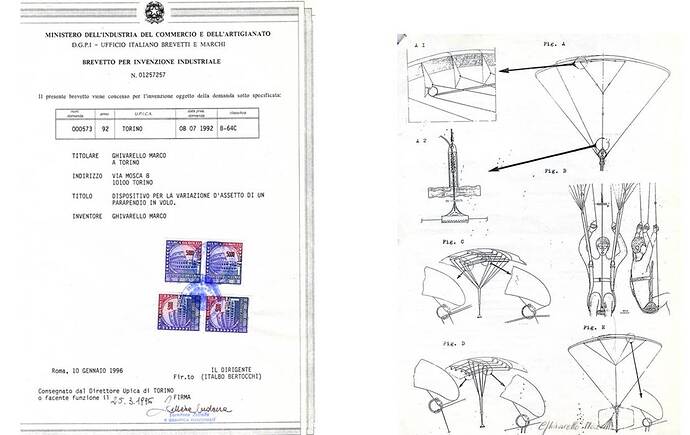 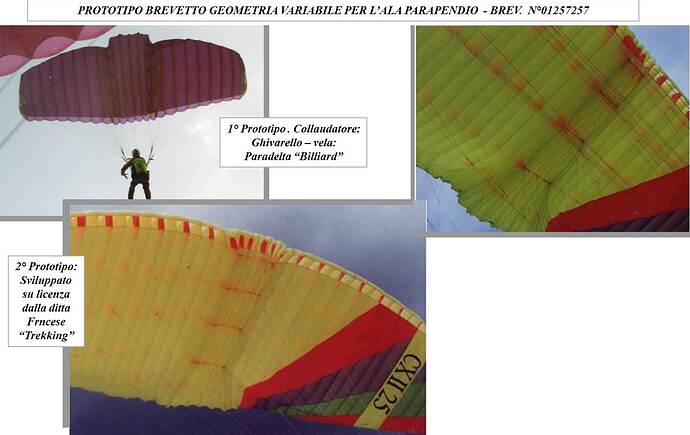 Welcome to the forum @MarcoGhiva ,

Morphing kite wing looks to be a very interesting topic.
I can’t download the images. Could you please attach them directly?

Below is a description of a sort of morphing kite using a leading edge inflatable wing.

Translation: Armand Torre is the man who designs our kites. We owe him the invention of the Bird mode on our SeaKite kites. An ingenious invention that allows to reduce the power of the kite during the launch and recovery phases. Other videos: [Bidkite 25m2 aile pour kiteboat] [Birdkite aile de traction pour kiteboat] The Birdkite is a kite specially designed for towing boats, it is launched in single line thanks to its capacity to keep the auto-zenith and then…

All these wings could be suitable to mitigate the energy consumed during reel-in depower phase, for yo-yo (kite-reeling, or bounding) mode.

All these wings could be suitable to mitigate the energy consumed during reel-in depower phase, for yo-yo (kite-reeling, or bounding) mode.

Yes, this concept was born for increase the safety of a paraglider canopy (I was sucked two times from a storm and is not a good way to fly), but can be transferred on the AWE kite wings. There are some issues to solve, one big is related to the wing twisting, but I think that flexible wings have big opportunities in a such direction.

@MarcoGhiva
Marco, brilliant to see you posting here. Thanks.
Very intricate skilled work putting that together.
Looks like the tech could be very useful also for the lifting kite in the kind of systems I like flying.
e.g. lower wind - larger span - same lift - happy operator
do you have any test data or general advice on how stability is affected when the wing is compressed?

Could be very handy for reducing the winching needs of launch equipment in my case.
So cool to see
Thanks again Marco
Roddy

Ciao Rod,
thanks a lot for your feedback. This system worked with ropes and a pulley system that rotated the ropes by 90 ° going to act horizontally on a row of caissons (on each side) going to close a nice portion of the sail (I don’t have the original drawings here with me and if you want I’ll send in September), I remember a 30-40%. You can see it well in the photo with purple sail - a Billiard from Paradelta Parma, the pilot was me, over 30 years ago). It was tested on three canopies, the Billiard, a Edel Energy (but immediatly removed, insane test, with this aggressive glider) and a French paraglider, CX2 (with a start of collaboration with Treccking Italy, ended with an attempt to appropriate my idea). The test work was only started, but what I remember are: (1) a super clean way to close (instead of the “big ears” of all the actual paragliders), (2) a very big increase of the vertial speed and conseguent (3) lowering of L/D, but also (4) a worsening of horizontal flight performance caused by uncontrolled wing warping. This was only apparently a simple device, in reality an optimization had to be done on all the flight parameters and this in both configurations. Work that requires the designer of the wing you fly on, and a good test driver, not a crazy Sunday pilot like me. I have in mind some ideas for obtimize the device, but I should live 3-4 lifes in contemporanea, have lot of time and lot of money…Ciao Rod!

This is all very interesting though I am not sure I have much to say about these kites. You seem far ahead of me and really I dont know enough about kite design to give much feedback. Thanks for sharing anyway

I thank you. This idea comes from many years of flying and taking risks in the past.
My skill is more based on practice, I usually use a minimum number of formulas which however allows me to fully understand the concepts in the studio and I try to cross-check the whole project.
This concept could have a double meaning, both in the AWEC community and in free flight.

As a paraglider pilot you know the technique of “big ears” right? So i dont really see the point of all of this extra complexity when the same can be done to a totally unmodified wing by just pulling the outer front risers…

Yes I know, I am actually flying with a two liner (Ozone Zeolite GT).
I try to answer for points: