Please help me with naming these flying conditions

There seems to be a lot of terminology borrowed from the aircraft industry in AWE. Some examples are sink rate, wing loading and stall speed. Though they do provide some insight it seems to me that kites are kind of different, and I tend to return to polar curves for analysis.

I am wondering if there exists any terminology for the phenomena described below.

When a wing is flying at a low angle of attack [AoA], the lift-to-drag or glide number [G] will increase with increasing AoA. At a certain point, maximum G has been achieved. If we continue to increase AoA, G will decrease.

What is the name of flying on “either side” of the maximum G conditions? High-lift devices like flaps slats and slots imply also a high drag, so a use of the “either side”. Such devices could also be useful for some AWES. As example https://www.researchgate.net/publication/320742362_Drag_power_kite_with_very_high_lift_coefficient already discussed. I think also about some other AWES possibilities. In aircraft design and aerospace engineering, a high-lift device is a component or mechanism on an aircraft's wing that increases the amount of lift produced by the wing. The device may be a fixed component, or a movable mechanism which is deployed when required. Common movable high-lift devices include wing flaps and slats. Fixed devices include leading-edge slots, leading edge root extensions, and boundary layer control systems. The size and lifting capacity of a fixed wing is chosen as a comp...

I think for kites the tether drag should also be included in determining if you are left or right of maximum G on the plot.

Anyways, I was wondering not mostly about the physics, just if this has a name, eg. flying G-upwind or G-downwind.

A kite should stabilize itself at optimal G, but for dynamic movements it’s not so simple.

I got some feedback. So I will try with a few figures. Please chime in if you like one rather than the other

This is what a kiteboarder would expect: 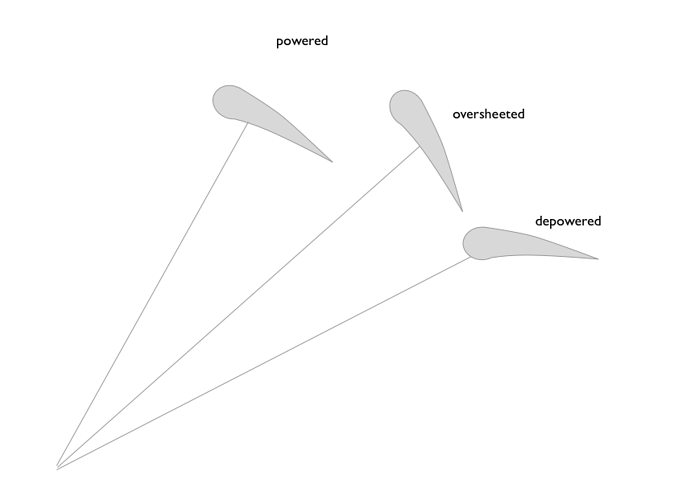 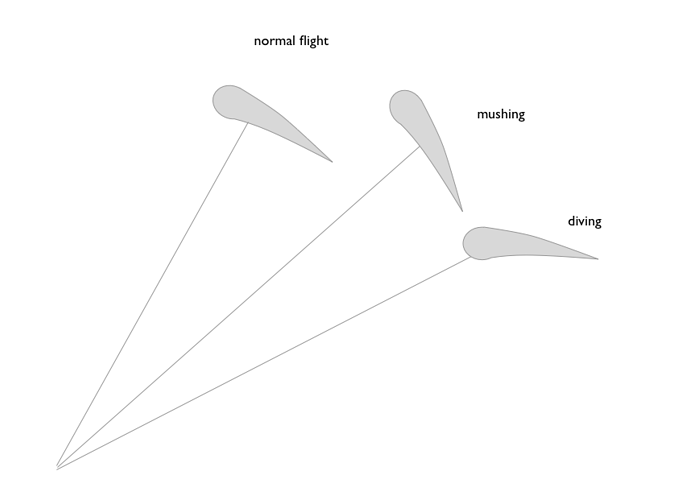 So for the “perfect” setting we have:

For the too high AoA setting we have

For too low AoA we have

I cannot say that I have understood all these terms correctly, the above is to the best of my knowledge.

you could define your AoA so that it is 0 at maximum G, then you have negative vs. positive AoA

I think if you chose a wing profile, zero AoA is already defined by geometry. Lift to drag curves would use that reference.

Anyways I was more looking for names to describe the conditions rather than using positive/negative AoA.

For AWE use, why not “depowered, (then) optimum L/D ratio point (or maximum G), (then) mushing.”?

“Mushing” can be also the point where there is maximum pull, and is used for several AWE configurations like yoyo for static kites, but also for crosswind kites if one considers the AoA of wing is replaced with the AoA of the full swept area that is similarly tilted.

So yoyo systems would use mushing (reel-out phase) and depowered (reel-in phase) points.

Yoyo should be using optimum G (choose alternative name) after taking tether drag into account. So for the wing alone you would be mushing, but the system should in my opinion be considered as a whole PDF | As an alternative to conventional wind turbines, this study considered kites with onboard wind turbines driven by a high airspeed due to crosswind flight (“drag power”). The Hypothesis of this study was, that if the kite's lift coefficient is...


“To achieve a (very) high CL, multi-element airfoils were considered, a solution commonly used in commercial airliners for decades through slats and flaps [18].”
Slats and flaps are used during take-off and they increases both lift and drag, the wing AoA getting closer to a mushing point IMHO. The idea is “Because the power increases cubically with CL and decreases only quadratically with CD,eq.”

Static kites like parachutes could use both higher lift and drag to increase pull during reel-out phase, using mushing point rather than optimum G that is used by a lifter kite.

Crosswind kites will use optimum G in regard to the apparent wind, but their swept area could be tilted like a static kite in mushing position.

Mushing position for static wing with high AoA or for highly tilted swept area could also be called as power position, where the elevation angle is low in order to increase the swept area and decrease the cosine loss.