Say the wind is blowing steadily 10 m/s. At a point in time, a gust hits, lets say it immediately increases to 15 m/s.

I am looking for any opinions, papers, experiences or otherwise to describe how such a change of wind speed will propagate. So If you are at a position 100 meter downwind, what kind of time delay could you expect for seeing the “same” gust at that position.

I found this which seems quite descriptive

It’s gusting speeds up to 24 m/s 55mph in some parts of the Isle of Lewis today.
Nice weather to learn in. https://www.windy.com/58.171/-7.104?58.078,-6.669,10
It’s a fairly steady wind 15m/s you can lean into it >10deg over a drop or slope.
What’s causing your gust? Is is a squall where an eddy has formed from winds coming around a headland, over an obstacle…? Might travel as a local disturbance (fairly slowly) a couple hundred meters.
Or is it from a disturbingly big lump of fast moving air higher up heading downward? This stuff has more punch behind it and wakes up a lot larger volume of air in your vicinity.

Gusts are commonly associated with vortical motion embedded in the wind field. As such, there is both a moving surge in wind velocity and associated lull, and either will perturb a kite (lulls often called “wind pockets” by kiters). The advancing side of the vorticity is the gust, and retreating side is the lull, when overall wind velocity is close to rotation velocity. If the core of the vortex passes close to the kite, the velocity and direction changes happen very fast.

Gusts are really a zoo of vorticity-related cases. An particularly interesting kind is a breaking gravity wave between two layers of air moving differentially, which can cause the kite to tumble like a surfer in a clothes-dryer motion. The grandest of these is a constant breaking wave in the upper stratosphere, as dawn rolls around the globe, with a daily gust-lull/lift-sink signature (a common case is rolling vortices between surface inversion calm and an LLJ. Its best to move the kite above this interface).

The common “dust devil” scale of vorticity occurs several times a year most places, and will impact kite farms accordingly. A Gustnado is intermediate between a tornado and common tiny vortex such as is caused by terrain or virga. Studying vorticial wind motion at any scale helps understand other scales. 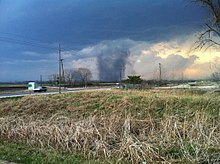 A gustnado is a short-lived, shallow surface-based vortex which forms within the downburst emanating from a thunderstorm. The name is a portmanteau by elision of "gust front tornado", as gustnadoes form due to non-tornadic straight-line wind features in the downdraft (outflow), specifically within the gust front of strong thunderstorms. Gustnadoes tend to be noticed when the vortices loft sufficient debris or form condensation cloud to be visible although it is the wind that makes the gustnado Th...