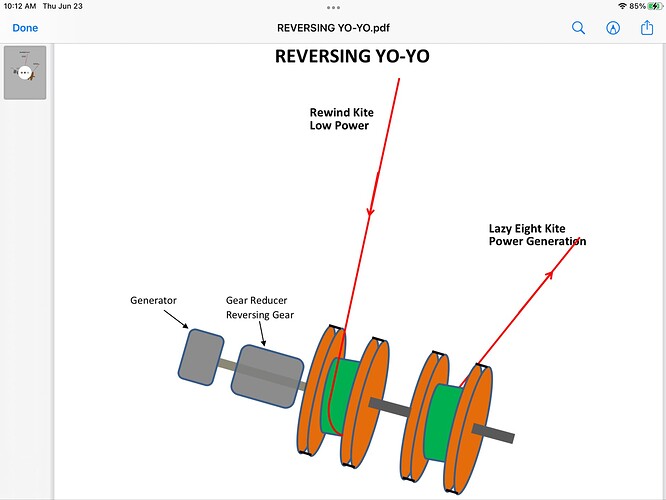 image1920×1440 76.8 KB
If we have two kites on a single axle which wind up in opposite directions, then we can retract one kite at a slower speed while generating power with the other. The kites will not interfere with each other because the yo-yo kite operates at a low elevation and the return kite is at maximum elevation to minimize forces. The power axle reverses direction at the end of each stroke and we can incorporate a reversing gear in the gear reducer so that the generator always operates in the same direction. With this method we obtain almost constant power with only a brief interruption when the system reverses.
If we compare power output of two conventional yo-yo systems with a single reversing yo-yo we will achieve 20% more power with the double yo-yo. This is because we lose about 40% power during the retraction phase. The disadvantage of the double yo-yo is that it requires an extra gear reducer and generator and will occupy about double the land area.
tallakt June 24, 2022, 5:11am #2

I believe KPS started with a design similar to this.

I believe you get less average power output because you could only produce 50% of the time while normal yoyo could produce maybe 80% of the time. For this reason I suggest adding a third kite to have two producing and one returning kite at any given time.

What you are saving here seems to me to be conversion losses when reeling in/out. So to me the three separate kites seem attractive in comparison because of KISS…

What you are saving here seems to me to be conversion losses when reeling in/out. So to me the three separate kites seem attractive in comparison because of KISS…

The problem is that the three kite system is not simple and requires about three times the land area. Rewind speeds are not the same as unwind speeds (separate drives?). With the reversing yo-yo, unwind and rewind speeds are the same. The rewind reel is directly powered by the unwind reel.

Might I point out that intermittency was the reason for the “laddermill” concept?