Below there is an interesting example of scaling by size (from Barnard's predictions ) :


For what I remember Mothra1 is an arch of 300 m². As this kite contains several elements it can be seen also as Scaling in numbers rather than size , even as a kind of Kite Networks.

I don’t know the conditions of this test. With a wind speed of 10 m/s, the force could be quite huge, several tons when the kite accelerates by rising.

With some first changes (adding a winch and a generator) and some research (depower for recovery phase) it could work as a yoyo system.

As this kite contains several elements it can be seen also as Scaling in numbers rather than size , even as a kind of Kite Networks.

Pierre I think you’re confusing a “kite network” with simply being too lazy to join, sew, or otherwise properly attach the tarps together to better create a solid, high-aspect-ratio wing surface of reasonable efficiency, rather than a punctuated, leaky wing full of “tip losses” every few feet.

The 50 tarps were rigged like a classic ship sail plan, and similarly effective. Not a single “sail” blew out in high wind. Modular wing sections vitally enable mega-scaling. The Megafly parafoil also comes in sections. Choked bypass flow helps with flutter-mode stability and gust resilience. The splayed wings of large birds, the multi-sail golden age of sailing, share those principles.

Dave Culp started the Blue Tarp Kite Village Power challenge. Let anyone do better, more power to them. Mothra was no lazy effort, but more work-kite sooner and cheaper than anyone else at that time, a prophetic flying machine.

The new Toyota Mothership concept closely matches Mothra aerotecture. The Mothership is emerging from US Tornado Alley, not just Japan, via OSU and Toyota’s Midwest network. Proposed final scale is beyond what any AWE player, except kPower, has diligently studied.

From the video I dont see how this kite structure could produce much power. Nor does it seems that the cloth is flying cleanly. While I applaud the effort, there is still a long way to go before arriving at something commercially useful.

I would see this akin to looking at Makani’s first 1-2 meter wingspan experiments and conpating them to the current 600 kW model. Say what you will, but there is a lot of effort that went into developing that. The Mothra it seems needs a similar development effort before one could assess if this is worthwhile.

I am going to go against what I read about some of the comments about the video.
The Mothra video shows all in few seconds: high power during rising, then depower.

Then on the video we see the kite stung from his nose: it is a potential efficient depower way to study.

I remember some discussions on the old forum, with Mothra lifting turbines. But turbines are not needed. They will be cumbersome and dangerous when the set scaled and will be subject to uncontrollable aeroelastic divergence.

For this the yoyo mode is specially appropriate as during the vertical trajectory (see Magenn) it flies crosswind, certainly on a short trajectory, implying a short power phase since the kite can fly at 26.6 m/s (let us assume a wind speed of 10 m/s, and a L/D ratio of 4, and a reel-out speed of 3.3 m/s). Then the depower recovery phase by the nose could be fast and without too much expense of energy as the video suggests.

A ground installation allowing facing all winds has been documented, but I have some idea for a simpler and more robust installation as it must undergo tons of traction, thousands tons for a 85 MW 1 km span arch. After all if (as @tallakt indicates) “Makani’s first 1-2 meter wingspan experiments and conpating them to the current 600 kW model”, the first 50 m span arch could be a model for a 1 km span arch.

And a complete arch AWES matches the power/space use ratio I often invoke, and that far better than a crosswind kite like Makani. 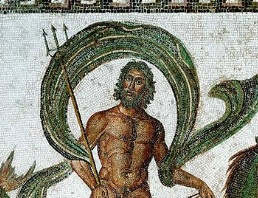