This topic is like a counterpoint to the interesting topic Scaling in numbers rather than size.

The main argument I can make is the tether as an irreducible part of an AWES. If we intend to harness high altitude wind energy, the tether length will be the same whatever the dimensions of the flying body. So small flying bodies would lead to a forest of long tethers with high mess risk.

As a resulting assumption the flying body should scale with the tether length to maximize the space. A tether is a little like a tower of a ground-based wind turbine. The tallest towers are about 120 m, leading to larger rotors of 150 m diameter. The proportions should be the same for AWES: the tether length should be equivalent to the dimensions of the flying body or its maximized swept area.

Another predictive “Kite Number”: Let Tether-Factor be defined as the non-dimensional proportion of tether-to-wing (length-to-area).

The high end of the spectrum of the tether length ratio is represented by the single-line kite altitude record design-class. The current record is a ~5000m long tether to a ~10m2 kite, which we can say approaches a (practical) maximum- Tether Factor 1. Conversely, a minimal tether ratio of zero (TF 0) is approached by a kite arch case as pure wing; whose arch “ears” attach directly to the ground; or any standard kite anchored to the surface by towpoint or bridle-points.

Tether Factor has a strong but complex relation to AWES performance. In some kite cases, tethers are a problem source of high parasitic drag and operational instabilities (esp. fast kiteplanes), and in other cases, only a sufficiently long tether wins (like the single kite altitude record, or an AWES tapping an LLJ above a surface inversion). In every kite application niche, TF has a characteristic range predictive of nominal performance…TF is even a harmonic tuning factor (according to conditions)"

It is indeed an interesting discussion. From your previuos worries I can only agree and state that a huge AWE plant with only one wing, or only one kite network is a likely (though not necessarily most probable imho) candidate for best feasibility.

Scaling is limited by tether drag and mass really. A rig that works in small scale will scale pretty well.

This means, tether diameter, flight pattern, tether length and wingspan of a kite scale the same. Once an architecture is proven at small scale, you may scale up. You get the benefit of wind gradient and the problem of cubic mass with scale. Very simplified.

This is my current understanding on the subject

Not all kites scale equally. The designs that scale best start with highest power-to-weight, to offset square-cube scaling losses, plus many higher order scaling factors.

If you measure from the kite edges, what is the shape?

What about frontal airspace vs frontal kite area?

Are you using projected or frontal kite area for ft2?

I dont understand what you are thinking here. Either a kite network with many tethers and total kite area, or a single kite with a single tether. The AWE architecture should have a massive impact on dimensions. For single kite single tether, the dimensions you suggest are ultra short tether compared to current popular concepts. This is an interesting direction, but its difficult for someone like me to see how that kite would even look…

It is very clear. The flying body is 1 km for one of several tether(s) of 1 km. The discussion goes towards confusion because of numerous irrelevant posts from @kitefreak as for any topics.

This is an interesting direction, but its difficult for someone like me to see how that kite would even look…

I agree the difficulty then I am glad you see it.

A sketch is below, here a rotary AWES or several crosswind kites sharing the same swept area. It is not necessarily my choice for an AWES but only a way to represent quickly what I try to say. 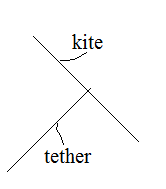 So Pierre is proposing WS/TL*=1 as an AWES scaling design principle.

No other critical AWES scaling principle or limit is accounted for, so caution is due.

The value of 1 is obvious from my first message.

MSA is two-dimensional. The values are incommensurate.

the dimensions of the flying body or its maximized swept area.

The dimensions of a swept area are dimensions, not an area as such, and are not measured in km².

Thank you Pierre, for your patience in explaining how you reach your results.

“Swept area” really is Area to be accounted in m2. The confusion is to insist otherwise.

Again, WS in meters and swept area in meters-squared are not commensurate values, and would not give the same tether length.

KiteForum.com is not the best place to clarify the math contradiction. Its a great source of kite knowledge, that we can rely on for that.

A swept area has dimensions that are measured in meters.

@kitefreak you persist to don’t see any difference between dimensions (in m) and area (in m²). The topic I opened is about the proportions of the dimensions between the tether and the flying body. So the same unity (the meter) is necessarily used.