Scaling in numbers rather than size

I was thinking today: most talk about utility scale AWE talks about scaling up to get costs down.

Could we scale in numbers instead? Producing large amounts of commoditized, self-running AWE rigs may be another path to getting large scale, even if each wing is only, say 20 square meter.

Smaller wings are easier to handle.

Many smaller wings could share a more expensive taxi drone for takeoff.

The only other scaling law (except cost) that could counteract this is the square root scaling of tether drag. This dictates that we need ideally a single tether connected to a gigantic kite to get to high altitudes. But high altitudes can be obtained through other means also such as concave tether configurations (eg Y kite pairs being the most common scenario) and also supporting downwind pull through tether networks or helper kites…

@Rodread seems like someone wants a pitch for kite networks.^^

Large kite networks are not quite what Im thinking about. Rather many smaller separate units working in coordination

If they are all in a single network, there is not much difference in complexity compare to a single large wing

A train of 17 Gayla toy delta kites made it to almost 10km altitude in '60s. One big kite is not as good, under cubic mass scaling. DE train made 10km record a century ago. Modern single kite record is about half that.

All scales and network classes should test against each other, rather than the guesswork approach single developers are forced into. Waiting for any location to host the sort of broad AWE research needed, with adequate investment.

I dont think it’s as easy as just calculating which configuration is optimal. You also need to know where to look for solutions. If you are questioning normal assumptions (eg why must we scale in size rather than number) then you could discover a new avenue of possible solutions.

Testing everything against eachother kind of assumes that you know all valid configurations up front. I dont think that represents real life very well

Testing “everything” means not presuming to know where the design process may go.

“Scaling in numbers rather than size” approach should test/model against scaling in numbers AND size. We can all agree that even with large unit-kites, we’ll need a few million to power civilization. Lets test if 20m2 unit-kites is the numbers-scaling sweet-spot, and ship-kite derivatives prove not preferred by size.

A side-by-side operational and LCOE evaluation of 30 20m2 units to 1 600m2 unit would tell a lot. The sweet spot may be around 200m2; who really knows until testing decides.

Testing is always aspirational. Its the opposite of a-priori armchair confidence. Of course we do not know ahead of time what AWES configurations are ideal, but broad parametric testing with small kites reveals paths forward that narrow venture down-select bets cannot.

Scaling in numbers has always been presumed, since a few kites can’t do the job of replacing fossil fuels.

Tether mess could be more prejudicious than tether drag, excepted with some configurations to find.

For example I think about the system described by Tallak on Power to space use ratio.

Yes, Pierre, a bunch of individual small kites cannot fly to our 500m FAA designated resource without large field separations, or they will tangle and cutaway. That’s why we came up with “metakite” kite-of-kites concept, like teaming animals up to pull large loads without fuss.

Many individual kites in a farm is “brush topology”. Tallak, you seem to be betting active digital autopiloting beats the many-connected passive-control approach to mastering many kites in the tightest practical airspace. Reliable active control, at best, will take quite a few more years to prove. That’s exactly why its valuable test both a larger number of smaller faster-turning kites against the same area of fewer larger slower-turning kites, to compare both choices, and test in both active and passive use.

Again, everyone in Kite Networks agrees on “many kites” already. The open questions to settle in testing are how much to constrain them passively, and how large is an optimal utility-scale unit-kite (??).

Interesting how this guy talks and talks about extracting energy from “kite networks” but refuses to show how to extract power from a single unit kite. Wouldn’t it start with a single kite, or just a few? THEN ramp it up to laarge numbers, once you have shown how it works in principle? Is citing “huge numbers of kites” just his latest excuse for never showing any power production? Folks, I think you can safely ignore all you read below. What I had jokingly described as “The Professor Crackpot Syndrome”, as it is turning out, was not nearly sufficient to describe what you’re seeing now. Placing a Savonius windmill into a too-small wind tunnel and citing it as a breakthrough is like a kid with a cap-gun compared to a fully-armed urban assault vehicle spewing a poorly-aimed anti-aircraft fusillade of nonsense at the persistent reality of the actual world, in an internet-only attempted defense of his ill-defined defensive perimeter of his 100% self-constructed, self-confirmed, dog-chasing-its-tail fantasy-world.

Just a few weeks ago, this poster announced his “latest breakthrough” in the form of a kite repeating a “dutch roll”. The common self-guided figure-8 flying behavior of two-line kites was noticed and suddenly became “the answer”. I asked him to show how it could be used to generate electricity, the obvious next step. He said that was indeed the next step, promising “You won’t be disappointed”. “Sure” I thought, “like your concert that never happened”…

Since then, he has quickly backed off that promise, suggesting he should never be asked to produce any power, placing himself above that pedestrian task, more recently claiming his “research” is limited to “physical” stuff. Oh, nice dodge. “We don’t do electrons, only “phonons””… Well, that didn’t take long, now did it? So now, after 12 years of claiming to be “testing everything” (the monkey at the typewriter approach), the basic theme in wind energy of providing a power curve or cumulative output figures has been entirely abandoned for a world of complete fantasy, where this person pretends mastery of virtually any branch of pop-physics, quantum physics, etc., pretending it applies to wind energy, pretending to be unfolding the future of wind energy, within a self-constructed world only He can understand, with the idea of ever producing any power at all, ever, seen now as a mere annoyance interrupting his fantasy. I can’t think of any previous wind energy crackpot having ever having departed this far from the real world the rest of us live in. Completely “off-the-rails”. Take it seriously at your own risk.

Is the topic becoming a Crackpot network topic?
I expect @Windy_Skies will split our last posts by soon.

Doug’s error in logic is to think that energy production by a single kite is not well enough established for anyone who wants to think about kite networks.

That’s like arguing we should ignore Etzler’s AWE intuition simply because he did not also make an AWES.

https://kiteswarms.com/ : “VISION
At Kiteswarms, we are developing the future of wind energy. We are building vertically ascending kites that are interlinked and rise together to a great height with consistent wind conditions. This allows us to constantly harvest wind energy in abundance, compared to conventional wind turbines. We develop a disruptive technology in the energy market, to make our global energy needs green, safe and available for everyone.”

I would add: scaling in size rather than weight.

Daisy is Scaling in numbers rather than size.

The figure 21.14 shows numerous kite rings with hundreds kites. Now Daisy has three kite rings. As a way to grow @Rodread could add a kite ring in each fundraising of a pre-market plan for scaling.
https://www.researchgate.net/publication/324134942_Kite_Networks_for_Harvesting_Wind_Energy

Just adding a random thought: Lets assume you split a single large kite into N parts with the same total area, and the scaling of mass is x^2 < x^s < x^3. x is understood to be the scale of the wingspan, and s is the scaling factor of the mass of the kite.

If you want to get ridiculous, for n = 30, s = 3 rotary rig with 90 small kites rather than a huge one, the weight savings would be 82%. Having the kites flying in ellipsoids or other patterns rather than circles would increase the swept area.

Large number kite turbines aren’t so ridiculous …
Have a look at this comparison… 4 soft kite turbine rotor sets are compared…, with varied numbers of hoop stages and kites per hoop. They were run through the net torsion simulation with the same parametric force distribution characteristic over the conic form… as follows 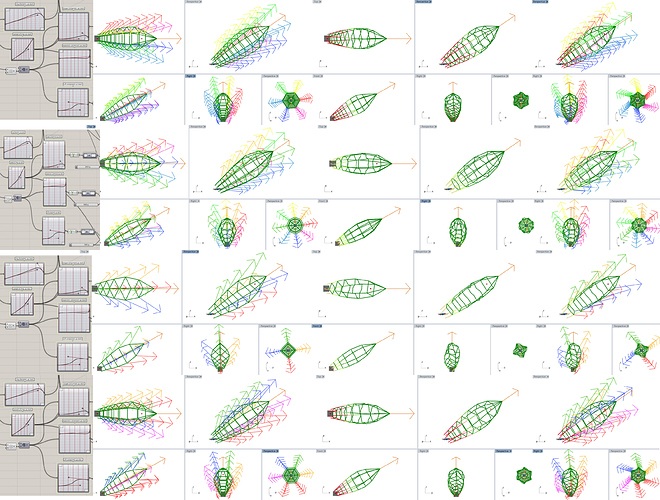 Yes, always more testing is good. In the case of torque-drive, to validate or falsify outcome predictions about uneconomic angular velocity with scale, operational workability, safety, and so forth. Its never enough to predict which paths may or may not work, they must all be tested to the limit, to settle all doubts for massive investment.

The surest prediction is that scaling by numbers is necessary to meet global demand. Optimal unit size currently seems to center around 200m2, for about 1MW rated performance, based on solid ship-kite experience. A comparable Daisy unit should be developed to fly-off against.

Millions of AWES units will follow when an AWES architectural unit-winner is proven. AWES drone/rigid-wing unit designs need to be shown crashing next to soft-wings at scale, for ideal investor education.

@kitefreak your post was maybe contradictory.
You say test everything to validate, then give a “surest prediction” and suggest an optimal unit size.
I’m sure you agree
There will be many steps in kite turbine test & evolution before any optimal is knowable.
Testing a single 200m2 unit is scary enough let alone 100 of them on a network.

The pseudo-predicted inefficiency due to lower rotational speed of large diameter rotors. I’ve explained why this is wrong before. Please provide data to substantiate the idea, before suggesting it again. Lets go through it …

In terms of generators… You’d be correct. High rpm speed gives you higher voltage and higher power density. Answer - Gearbox.
The bit on the ground which spins to make electricity can be made to spin faster using a gearbox.

In terms of turbine blade motion. No.
This is the flying bit. The stuff in the air which wants to be light, sleek, strong & fast to be efficient.
Classic AWES analogy
Wind turbine blade tips are the fastest, lightest & most efficient parts of a wind turbine blade. They have the sleekest profile.

I believe one of your favourite lecture references is…


Excellent choice. Evolution in Nature and technology rewards good performance.
For AWES we want high L/D. Looking at the tables on slide 20, 21 & 42
High Finesse in our given average wind speed will translate into the best continuous soaring energy return. As a bonus for strength, we have bridles. Wings supported by tethers have extra loading capability. But it’s at the cost of some drag.

Something albatross sized with the finesse of a sailplane could be very light and cheap by the thousand.
Light enough to be thrown and not kill people would be great… and arrayably cheap — aproaching ideal.? Dunno, we need tests.

This kind of flight doesn’t happen in tight circles.
I’m not saying an array of kites would be huge diameter either… That would have downsides too.

Maybe this is pretty 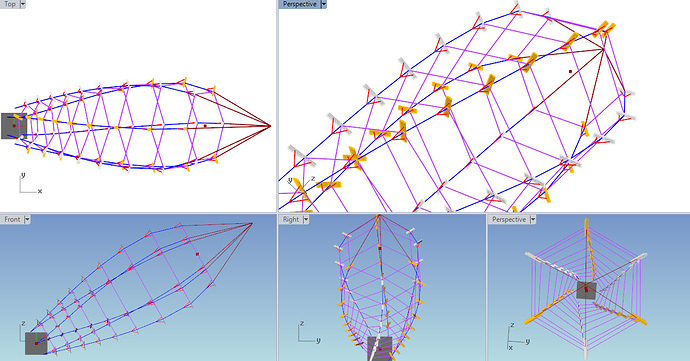 Let us all be free to predict as best we can, and then test away. Of course there is going to be “contradiction” between wrong predictions, including any of mine, and actual outcomes.

I hope you do manage to scale to a 1MW unit prototype, rather than just claim “pseudo-predicted inefficiency” about angular velocity loss with scaling.

“Many units” seems like a “surest” bet to me, if anyone wants to bet otherwise.

I think highest power-to-mass beats highest L/D, as well. Give me a big ol’ NPW or OL over any high L/D wing of equivalent mass, to flyoff against.