*Opposite slant to Daisy or Cb

Lifted Wing Set to Carry Series of Tails of Torque-Tubed Ringed Wings to GroundGens
New-Topic rationale: This is quite distinct from main-line slanted-and-held
torque-tube rungs of wing rings. 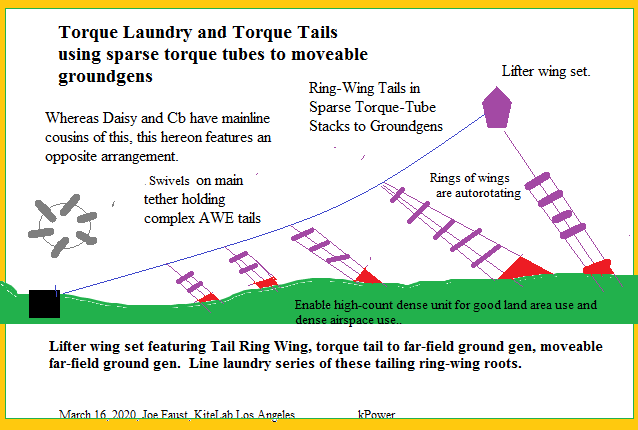 Hi Joe, The rotors you’re showing here are going to be very draggy for the lift line.
By keeping the rotor plane inline with the lift line the rotors develop their own lift and really only need steered by the lifter.
Also you are relying on the wind direction left to right.
That may be aleviated by having the whole set on a ground rail like this old sketch.


But even back then we could see the inclination of these trailing rotors was problematic
JoeFaust March 16, 2020, 9:53pm #3

Thanks, Rod. The topology for one tail or very many tails from one lifter set will be kept in file for exploring along with your good progress on lift-assist rings of wings in open torque tube for one tether strand from lifter-wing set. Certainly, as implied in sketch and in your firm statement on the drag cost on main tether, the tails or roots drag on the main tether. Part of the aim in the sketch is to get many tails/root assemblies from one downwind lifted tether; each tail/root implies more lift from the lifter set. Work done increases with each tail/root.

Edit#1
Something to know, perhaps: