Info and discussion on the above.

https://asmedigitalcollection.asme.org/solarenergyengineering/article-abstract/125/4/425/464739/Numerical-Implications-of-Solidity-and-Blade?redirectedFrom=fulltext
A numerical study was conducted to examine the impact of rotor solidity and blade number on the aerodynamic performance of small wind turbines. Blade element momentum theory and lifting line based wake theory were utilized to parametrically assess the effects of blade number and solidity on rotor performance. Increasing the solidity beyond what is traditionally used for electric generating wind turbines led to increased power coefficients at lower tip speed ratios, with an optimum between 3 and 4. An increase in the blade number at a given solidity also increased the maximum Cp for all cases examined. The possibility of a higher aerodynamic power extraction from solidity or blade number increases could lead to a higher overall system power production. Additional advantages over current 5% to 7% solidity, high speed designs would include lower noise, lower cut-in wind speed, and less blade erosion.

ABSTRACT
Experimental studies were conducted on a modified Rutland 500 horizontal axis wind
turbine to evaluate numerical implications of solidity and blade number on the
aerodynamic performance. Wind tunnel data were acquired on the turbine with flat-plate, constant-chord blade sets and optimum-designed blade sets to compare with theoretical trends, which had indicated that increased solidity and blade number more than conventional 3-bladed designs, would yield larger power coefficients, CP. The data for the flat plate blades demonstrated power coefficient improvements as the range of solidities was increased from 7% to 27%, but did not indicate performance gains for increased blade numbers. It was also observed that larger pitch angles decreased the optimum tip speed ratio range significantly with a small (5% or less) change in maximum CP. The optimum- design 3-bladed rotors produced an increased experimental CP as solidity increased, with reduced tip speed ratio, at the optimum operating point. A s blade number was increased at a constant solidity of 10% from 3 to 12 blades, aerodynamic efficiency and power sharply decreased, contrary to the numerical predictions and the flat plate experimental results.
Low Reynolds numbers and wind tunnel blockage effects limit these conclusions and a full scale prototype rotor is being constructed to examine the results of the numerical and experimental studies using a side-by-side comparison with a commercially available wind turbine at the Clarkson University wind-turbine test site.

At the opposite a two-bladed rotor like that of MTOsport autogyro (figure 1 and table 2) has a low solidity of 3 %.


The thrust is used, as for an AWES using it:

For an AWES both options can lead to some advantages. A low solidity autogyro rotor can be suitable when the thrust is used as for yo-yo systems, allowing both lightness and lifetime.

I was thinking people here might have started wondering about this after seeing my simple two-bladed rotors. I remember Ken Visser, one of this study’s authors, as well as a couple of the people listed in the references, from our old wind group of people who actually knew what they were talking about. It seems these days everyone who knows anything has either been told they are not allowed to post on the web (NREL etc.), or they got tired of telling people the facts only to be called names for their trouble (Paul Gipe, etc.). Really, those adept at wind energy would say they already knew the results of the study without reading it.

That said in autogyro mode, according to gma (in French language), the solidity (called “fullness” as translated from French language, a full rotor disc having a fullness of 1) cannot be lower than 0.025, so 2.5%, a little less than 3 %: this is due to the blade ability to withstand the load factor of the disc compared to its increased speed, because of the tension with the centrifugal force (perhaps also because of the forces of the full rotor disc such like lift and drag).

As a result more the solidity (or fullness) decreases, more the blades become heavy to undergo the load.

https://asmedigitalcollection.asme.org/solarenergyengineering/article-abstract/125/4/425/464739/Numerical-Implications-of-Solidity-and-Blade?redirectedFrom=fulltext
A numerical study was conducted to examine the impact of rotor solidity and blade number on the aerodynamic performance of small wind turbines. Blade element momentum theory and lifting line based wake theory were utilized to parametrically assess the effects of blade number and solidity on rotor performance. Increasing the solidity beyond what is traditionally used for electric generating wind turbines led to increased power coefficients at lower tip speed ratios, with an optimum between 3 and 4. An increase in the blade number at a given solidity also increased the maximum Cp for all cases examined. The possibility of a higher aerodynamic power extraction from solidity or blade number increases could lead to a higher overall system power production. Additional advantages over current 5% to 7% solidity, high speed designs would include lower noise, lower cut-in wind speed, and less blade erosion.

Conclusions
Using blade element and wake theory, the relationship between solidity, blade number, and power characteristics was explored numerically for the SG6043 airfoil. Maximum CP varied moderately with changes in blade number and solidity. The range of tip speed ratio for maximum CP varied strongly with solidity and weakly with blade number. Higher than traditional solidities and blade numbers resulted in higher CP throughout the range of tip speed ratios studied. All of the studies showed that an increase in blade number at a given solidity increased CP at the operating point. Increasing the solidity from the conventional 5%–7% to a range of 15%–25% yielded higher maximum CP values while lowering l at maximum CP to 2–4. Lower tip speed ratios could reduce structural requirements, blade erosion and noise levels. In addition, the high-torque characteristics of higher solidity rotors would lower cut-in speeds.

Off-topic here, but it seems to also say the SG6043 airfoil is perhaps best for small HAWTs. Searching for that in your favorite search engine gives many results. This one for example:

9. Conclusion
Performance database of 15 airfoils can be used in wind turbine performance and design of small HAWTs. SG604x airfoil family on the basis of wind tunnel test provides data sets that can be used in the design of variable speed HAWTs. Blade using the SG6043 airfoil are likely to yield the best energy capture in presence of free and fixed condition. The calculation of BEMT using SG6043 airfoil reduces the rated wind speed to 10 m/s for a rotor radius of 7.25 m and a rating of 32kW. The reduced rated wind speed would increases the annual capacity factor.

Small wind turbine power generation systems have the potential to meet the electricity demand of the residential sector in developing countries. However, due to their exposure to low Reynolds number (Re) flow conditions and associated problems, specific airfoils are required for the design of their blades. In this research, XFOIL was used to develop and test three high performance airfoils (EYO7-8, EYO8-8, and EYO9-8) for small wind turbine application. The airfoils were subsequently used in conjunction with Blade Element Momentum Theory to develop and test 3-bladed 6 m diameter wind turbine rotors. The aerodynamic performance parameters of the airfoils tested were lift, drag, lift-to-drag ratio, and stall angle. At Re = 300,000, EYO7-8, EYO8-8, and EYO9-8 had maximum lift-to-drag ratios of 134, 131, and 127, respectively, and maximum lift coefficients of 1.77, 1.81, and 1.81, respectively. The stall angles were 12° for EYO7-8, 14° for EYO8-8, and 15° for EYO9-8. Together, the new airfoils compared favourably with other existing low Re airfoils and are suitable for the design of small wind turbine blades. Analysis of the results showed that the performance improvement of the EYO-Series airfoils is as a result of the design optimization that employed an optimal thickness-to-camber ratio (t/c) in the range of 0.85–1.50. Preliminary wind turbine rotor analysis also showed that the EYO7-8, EYO8-8, and EYO9-8 rotors had maximum power coefficients of 0.371, 0.366, and 0.358, respectively. 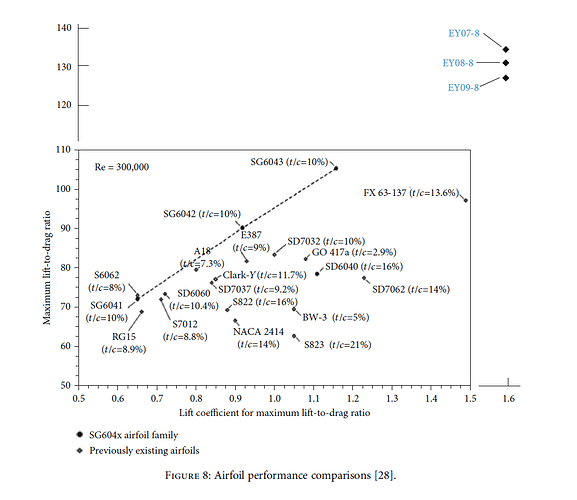 I like that their new rotors are literally off the chart.

Abstract: Among renewable sources of energy, wind is the most widely used resource due to its commercial acceptance, low cost and ease of operation and maintenance, relatively much less time for its realization from concept till operation, creation of new jobs, and least adverse effect on the environment. The fast technological development in the wind industry and availability of multi megawatt sized horizontal axis wind turbines has further led the promotion of wind power utilization globally. It is a well-known fact that the wind speed increases with height and hence the energy output. However, one cannot go above a certain height due to structural and other issues. Hence other attempts need to be made to increase the efficiency of the wind turbines, maintaining the hub heights to acceptable and controllable limits. The efficiency of the wind turbines or the energy output can be increased by reducing the cut-in-speed and/or the rated-speed by modifying and redesigning the blades. The problem is tackled by identifying the optimization parameters such as annual energy yield, power coefficient, energy cost, blade mass, and blade design constraints such as physical, geometric, and aerodynamic. The present paper provides an overview of the commonly used models, techniques, tools and experimental approaches applied to increase the efficiency of the wind turbines. In the present review work, particular emphasis is made on approaches used to design wind turbine blades both experimental and numerical, methodologies used to study the performance of wind turbines both experimentally and analytically, active and passive techniques used to enhance the power output from wind turbines, reduction in cut-in-speed for improved wind turbine performance, and lastly the research and development work related to new and efficient materials for the wind turbines.