Some talk about Dust Devils and Thermals 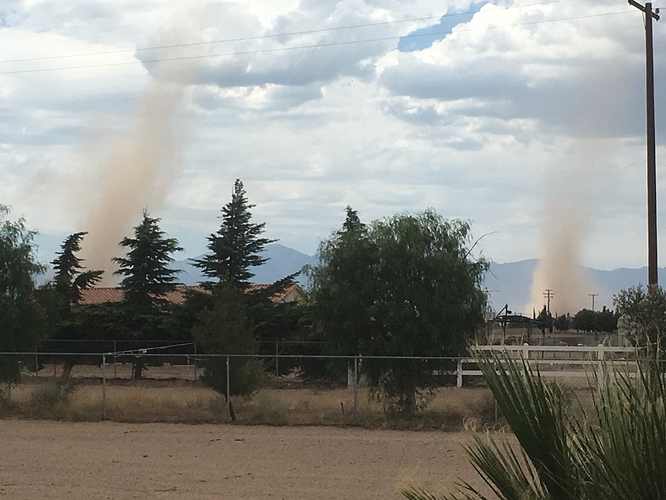 OK there is a picture of a couple of dust-devils here in the dusty desert. They happen everywhere, but because of the dust here, you can see them. It is rotating air. You see the central tube, but it is surrounded by a wide field of rotating air. All the windmills switch directions and lawn furniture goes airborne as they roll through. Wish I could show you the videos, which more clearly show the well-defined rotating tube structure, but they are too many Megabytes to e-mail out of my phone. 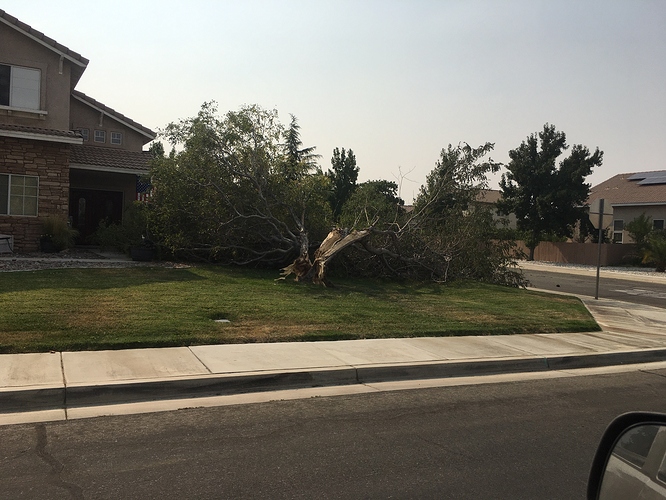 Here’s a picture taken the other day of a tree blown over on an otherwise calm day. Raindrops were falling when it happened. Not sure if it was a dust-devil, or a wannabe-tornado, or maybe some combination, but I was standing across the street and heard the CRACK as the tree was slammed to the ground.

You have trees?
Pah
I thought you said it was windy there

2 Likes
Ideas for scaling up AWES based on a tethered airborne rotor driving a rope drive
tallakt August 28, 2020, 8:59pm #3

To be honest, I have never heard of such in Norway, so this problem of dust devils may not be universal.

You have trees?
Pah
I thought you said it was windy there

Hi Roddy: I live in a more open area. We have about a half-mile of open space before the wind gets to this place. Yes I have some trees planted out along the road, but they are not upwind of this place. I’ve been careful to leave all upwind space open, not only for wind energy, but both my front yard and backyard are able to serve as airplane runways. This is a mountain pass called “The Cajon Pass”, famous around here for high winds and bad weather including snow in the winter. The fallen tree is in a residential neighborhood a couple miles downwind from here. Strange that I happened to be right there when it blew down. I was looking at a fence I own being almost blown over, then I heard a big CRACK and saw the tree being slammed to the ground. It was very quick. Oak Hills (here) has about two hundred 10-kW wind turbines powering homes. They zero out the electric bills. Now, that is, not “next year”…

To be honest, I have never heard of such in Norway, so this problem of dust devils may not be universal.

Hi Tallak: Well, you can get rotating air anywhere. Without dust, you would never see it. You might just feel a gust of wind, maybe a few gusts, possibly with changing directions if the center went through your exact location, or notice your wind turbine suddenly sped up and changed directions more quickly than usual. Do you have waterspouts? Maybe there is some magical place that always has smooth air, but in general, a wind energy system needs to be able to handle such turbulence. You could maybe build one of these machines in the picture and see how long it lasts at your location.

In Australia, a Dust Devil is also known as “Willy-willy”.[24]

Do You Know How Dust Devils Form?

Various types of tornadoes include the multiple vortex tornado, landspout, and waterspout. Waterspouts are characterized by a spiraling funnel-shaped wind current, connecting to a large cumulus or cumulonimbus cloud. They are generally classified as non-supercellular tornadoes that develop over bodies of water, but there is disagreement over whether to classify them as true tornadoes. These spiraling columns of air frequently develop in tropical areas close to the equator and are less common at high latitudes.[6] Other tornado-like phenomena that exist in nature include the gustnado, dust devil, fire whirl, and steam devil.

You seem to need specific conditions for dust devils to form, one being low wind at the surface. So not when you’d launch your kite. I think their frequency also probably correlates to the frequency of tornadoes in your area. If tornadoes are not a thing in your life, dust devils with enough energy to do damage – and that at the altitude of your kite – probably are not either.

I’m a little more interested in the more general and more frequent phenomenon of:

As the wind gets stronger or the sun weaker, buoyancy due to heating at the surface becomes less important. Thermals become smaller and less well-defined. It’s hard to state a simple rule of thumb for when the wind is strong enough to have a major effect, because that depends on the strength of the sun and the surface moisture. On overcast or very windy days, turbulence is produced by the wind shear, that is, the change in wind speed or direction across a layer. Shear driven turbulent motions are small compared to thermals, and can’t usually be taken advantage of to keep a sailplane up.

Can other AWE architectures being more compliant with dust-devils?

10 waterspouts were spotted at once recently…
Looks a bit like a network of kite turbines.

10 simultaneous waterspouts seen off the coast of Louisiana, U.S.

Up to 10 simultaneous waterspouts were seen and recorded off the coast of Louisiana on August 20, 2020. Lake Michigan currently holds the visual record of 9 occurring at once in a single photo. WOW... I am gobsmaked.... 10 #waterspouts at the same...

Actually we have about eleven or twelve miles of open space upwind of here, starting at the 5000-foot Crestline Hang Glider Launch
www.crestlinesoaring.org/
Which we see the back side of,
then the wind blows over the very windy Silverwood Lake
https://www.parks.ca.gov/?page_id=650
Then over about nine miles of rolling hills and chaparral,
then over a few ranch properties with houses and trees
til it gets to the half-mile or so of flat ground leading up to this spot.
So there is another house about a half-mile upwind - our nearest neighbor to the South - name is Bob. Just a few scattered Joshua trees between here and Bob’s house. They don’t block much wind. We’ve had the windiest season in many years. Sometimes I wish it would just stop. Hold on to your hat!