Today I tried to stabilize a SSSL by adding a second smaller kite (pocket sled) to an Y bridle on the top skin of the SSSL, attached around the placement of the second rib from center, sexond bridle attachment from leading edge.

The experiment was a failure. Still I’d like to explain my thinking.

The Pocket Sled (PS) flies stably at zenith but with low pull and low lift to drag.

If the SSSL zooms out to either edge, the y bridle will elongate either bridle point, hopefully steering the kite. In this way, the kite should both stay stable.

There is another bad thing that might happen. is the yaw is not pointing upwind, the PS could pull (without steering) the trailing edge of the SSSL such that is will dive into the ground, but this should only happen if the first steering effect fails completely.

Anyways, I might redo the test with the PS attached to a more rear bridle attachment (more steering effect?) and also once without the Y bridle and attachment near center leading edge.

But I am not overly optimistic about the idea at this point. 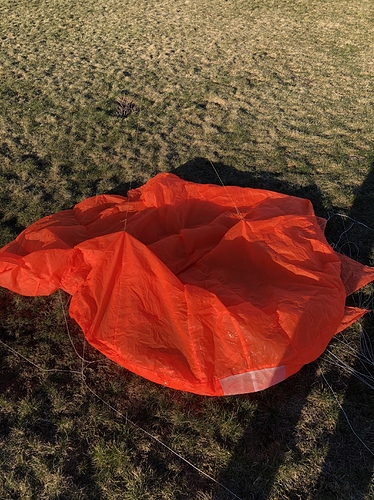 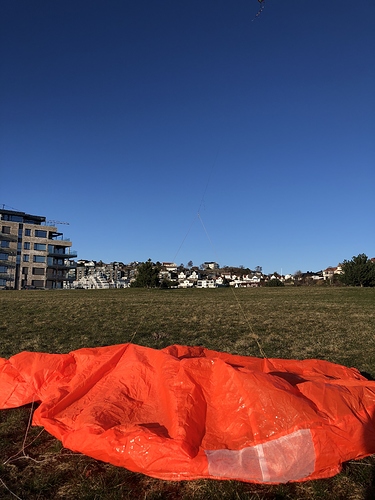 Second attempt was a possible success! Need more testing to be sure though.

Thus the working bridle was attached at the top skin, just by the two center attachment points closest to the leading edge. 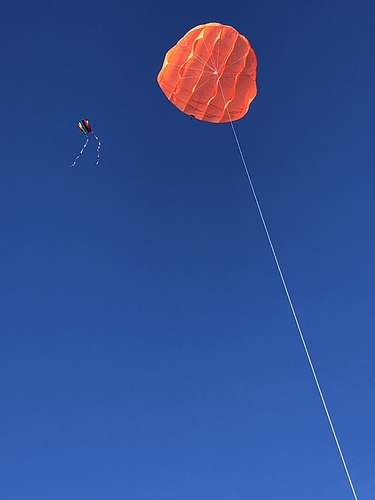 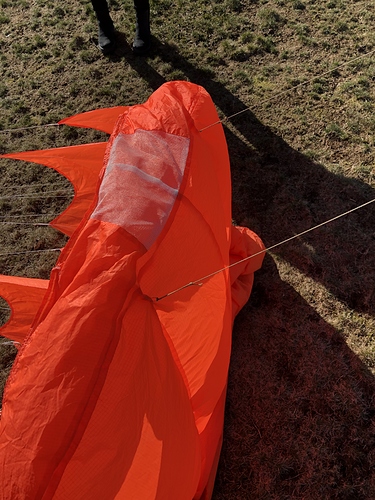 The lift to drag ratio might be somewhat worse than flying only with just the SSSL, but not much.

With the second kite attached to the leading edge, the SSSL would turn a bit more to the left and right, but the motion was always very short, and the kite would always end up pointing to zenith.

Compared to a flight without the PS, the following bad behaviors were more or less gone:

The difference in flight is quite clear. Now wishing for a SSSL with even higher lift to drag…

What is your goal? Do you want a line that pulls up strongly vertically and is stable to hang line laundry from? What about using a kite train if you want that?

My ultimate goal is lifting stuff in the air (line laundry) in the simplest cheapest manner, though still robust and flying high. (I admit stabilizing the SSSL is a fun goal in itself)

I have been thinking about using another kite. But I like the SSSL because it pulls great for its size and flies very high. I think just now my options would be the SSSL, a electronically controlles four line kite or flying lower.

I’d be happy to heat about other kites that would perform better in a wide wind range with good low wind pull.

Second: I think if the left/right diving could be solved, that would make possible a SSSL with even better lift to drag ratio going even higher.

(with higher I mean elevation angle of course)

Now the next question is: is a two kite system preferable to the options:

I think yes, because the small kite will be flying at approximately the same line angle as the SSSL you could fit more kites in the air compared eg. with long tails.

I believe the small kite is easier to get flying in a wide wind range than a bigger, and there are not as strict requirements to lift to drag ratio

I will look into kite trains…

I’ve previously attached a keel through the centre of 1 sssl then flown another sssl attached above… It kinda worked as a stack but Any misalignment of motion tended to crush the lower kite.