Peter A. Sharp invented and conceived stretch kites. It is a conversion system not yet listed, and yet perhaps the most promising. Two kites fly crosswind without downwind motion by reel-out as for yoyo systems, so without loss of power by loss of apparent wind, so with expected 9/9 power, instead of only 2/3² = 4/9 power for both yoyo, and flygen which are slowed-down also by a third but by secondary turbines. The respective tethers of stretch kites stay constant.

The conversion system is assured by a pull-cable running at fast speed (2 or 4 times kite speed), leading to a light and low cost generator working at high rpm.
More details are on the drawings and explains below: 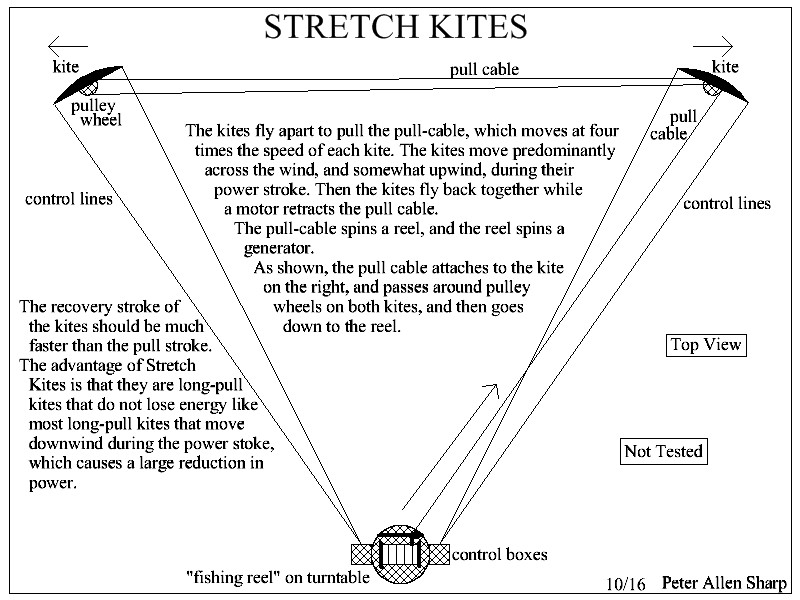 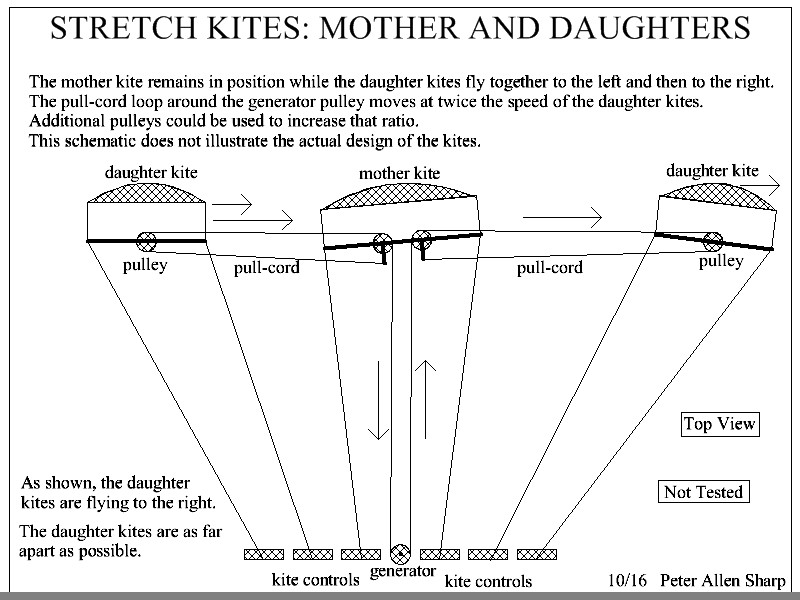 How complex! I won’t bet on that horse

Could substitute horses for the kites.
Peter is very prolific. I think it is at least a clever idea.

It seems to me that the claims about power efficiency are optimistic or probably just wrong. The tether between the kites will have to add a force in the kite’s ‘drag’ direction. My guess is that you end up approximating more traditional drag mode concepts in efficiency, except now you don’t get the hit in propeller conversion efficiancy which is possibly bad.

One thought is that the kites need to fly on a long tether because the path chosen will quite quickly lead to a large cosine loss. This will probably favor super liggtweight slow flying kites to efficient rigid wing kites/blades.

Another thought is whether this is the easiest approach if you were able to actually keep two kites airborne consistently.

Third thought: The kites need to be well synchronized in order for them both to fly at optimal aerodynamic conditions. If one of the kites slow down, it would get tugged backwards by the other (strong) kite. From the very brief study I have done so far I would expect radio communications would be a practical requirement for this type of rig (most designs would use a radio, but most don’t depend on them). Radio is a big issue when you get to the point where you want to fly above people.

Academic circles consider both flygen and yoyo kites have an equivalent efficiency (apart reel-in phase for yoyo) per kite area (W/m²). Yoyo kites loss 1/3 wind speed due to reel-out. Flygen kites loss 1/3 apparent wind due to slow-down by the secondary turbines. The power is 4/9 for both (2/3²). The stretch kites do not undergo these losses.

As the power kites have fixed tethers, they fly in an arc, from high altitude to a lower altitude, the cosine increasing during the trajectory.

The device on the first sketch seems to be feasible, needing a control system managing the balancing of the two kites.

From a power/energy point of view, the kites must slow down in order to produce power. The 1/3 loss of speed/tether reelout is an optimum point. This system may have another optimum point, but most definitively the kites must slow down or go downwind in order to create energy. I suspect 1/3 loss is the optimum for these as well. But I would have to look deeper into the physics. Right not I dont even understand the design of the device even.

From a power/energy point of view, the kites must slow down in order to produce power.

Indeed the load by the generator makes the kite to slow down. But this load (which is different according the features) exists for all systems. In addition yoyo systems add loss due the reel-out speed (1/3 wind speed), and flygen systems add loss due to the drag added by the secondary turbines, both losses being equivalent (apart reel-in phase for yoyo). Conventional wind turbines and stationary devices like kiwee or Altaeros have not this loss. The interesting point is that the stretch kites also seem to have not this loss, and they are crosswind kites in the same time. It is the first time I see a tethered crosswind system without such a loss. Perhaps there are other difficulties but a deeper study would be welcome, and especially since yoyo and flygen have not particularly shine so far (where are the curves of the prototypes?).

Conventional wind turbines have this loss by the nacelle generator slowing down the rotor. Same for Kitewinder. The loop chord will slow down rotation somewhat. Torque x rotational speed is where the power comes from.

For the stretch kites, forward speed of the kite x tension in the drag direction is where the power comes from

Stretch kites have loss as for 1) but not as for 2). The “tension in the drag direction” is not equivalent to the aerodynamic drag by secondary turbines; it is due to the load of the generator as for 1), as for kiwee, assuming some losses by friction.

Stretch kites are intended to avoid undergoing loss by reel-out. As flygen and yoyo systems are regarded as equivalent the efficiency of stretch kites can be regarded as higher as them, leaving aside other considerations such like friction due to the translation of the pulling-cable.

Assuming the power and the torque of the ground generator driven by the 120 m/s pulling-cable is equivalent to that of the generators in the secondary turbines, the load by the generator(s) is equivalent. Now the flygen system adds aerodynamic drag in order to drive the turbines. Stretch kites do not have this aerodynamic drag. The difference becomes obvious as we put off generators from flygen system, keeping only the unloaded propellers on the kite: the propellers will slow down the kite almost the same.

What about the need to “recover position” so the kites can pull “again”?
Isn’t this one more intermittent cycle that is not making power half the time?
Clever is one thing. Producing reliable electricity at a lower price is another.

The device on the first sketch is intermittent. In the second sketch there is only one pulling side, so that the daughter kites work alternatively.

However the return phase of the device on the first sketch could be in yoyo mode by implementing winches which would work during the return phase while the pulling-cable is rolled up, then the reel-in phase occurs while the two kites are already in the initial position for the next cycle. That stays intermittent but at least for a shorter time, the energy being expended only for winding the pulling-cable, and also the tethers for this variant I propose.

At least this system allows to understand better the lack of efficiency of both yoyo and flygen modes compared to wind turbines.

They all look intermittent to me. Obviously you can pair two alternating intermittent units to get closer to steady-state output but it still reverses.
Too bad AWE is stil sitting around discussing stuff like this after 12 years.
I guess we’re still at the point of nobody knowing what the hell they’re doing.
That is a step forward, since 12 years ago everyone thought they KNEW what they were doing. And that it would be easy to out-think all the experience wind turbine designers. Which is a common fallacy.

The problem with any intermittent system made continuous by having two equal systems is that each half is only being used half the time. So the second sketch represents a lot of overhead compared to eg. a traditional drag mode rig. The middle kite for instance has hardly any function.

A drag mode kite may have a ratio of production and return phase of 5:1 in time. To get zero intermittency and still have full utilization, you would need to have 6 kites in the air. Obviously the intermittency decreases anyway for each additional kite, but then complexity increases as well. Perhaps having electric smoothing of power on the ground is the better approach? Cycle intermittency would anyways be dwarfed by wind intermittency.

So with regards to having multiple units, for a given power would you rather deal with:

Now if your rig is built to utilize the kite 50% rather than 83% (for two rather than one kite), add a factor 1.66 to the above wing areas to get the same average power…

Just saying that dealing with one kite is quite possibly the most optimal AWE topology. Or an AWE rig with all wings rotating in sync. Not many kites that need to be steered individually

Simple is beautiful. Not surprised basic mathematical approach can highlight that

As I mentioned above the Stretch kites (first sketch) can be fully used: with the pulling-cord during extension power phase as described by the author, then in yoyo mode in return power phase (+ a short recovery phase), considering also that two kites are required to fully sweep the arc.

And when one kite makes fully the job as described above, two kites make two times the job.

That said I agree a single gigantic kite sweeping 1 km² by using 4 km² of land would be better than a farm of unities steered individually (furthermore half of the time by the yoyo mode!) and using 50 km² of land for the same amount of power like almost all companies are considering. But it is another story.

Also, if the stretch kite anchors were further to the side of the generator (and able to track round the base station with the wind direction) you could get a lot more power out of them when they sweep through their individual wind windows.

Every time I see the term “stretch” describing kites, I think of Spandex (stretch fabric).
What about Spandex? If it’s good enough for everyone from rock stars to overweight Walmart shoppers, why not kites??? :)))
P.S. reminds me I think it’s about time for this rock star to go shopping! When you miss a day at Walmart, that’s a lot of wasted Spandex!

Olivier is correct, these “stretch kite” concepts are overly complex. Its going to be hard for anyone to beat USP3987987fig5 for simplicity.

Peter Sharp is a brilliant DIY creative who has not been working in AWE very long; expect his initial ideas to improve, as he continues along.

AWElabs and kPower, both of Austin, focus on fig5 variants. kPower has worked out how to tack the kite back and forth without a control pod.

The Payne patent that you have cited is interesting but imho it does not represent the idea behind «stretch kites» which seems to be that of creating a «virtual fixed point» between two kites thus allowing the tether to move faster using pulleys and transferring more energy to the ground. The idea of the virtual fixed point may be useful in other configurations. I have some ideas to how the principle may be used in systems looking nothing like anything in this thread.

I believe this is the value here - an idea for a principle of operation. The sketches will probbly not work well enough as drawn.