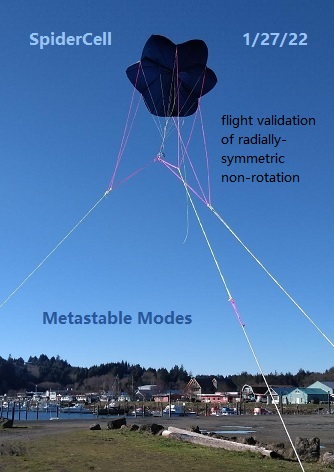 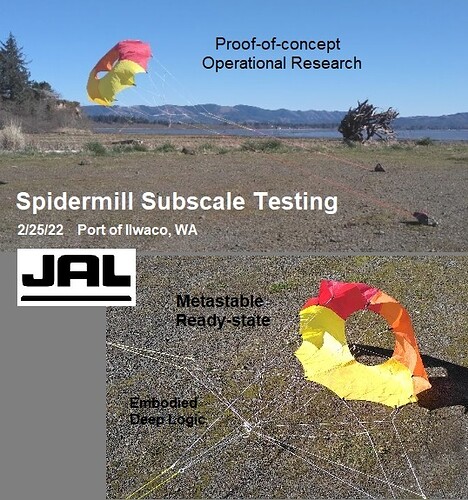 This is a good state during a wind lull, to conserve circle-tow energy and await the next gust.

An interesting neat patterning.
Is it your intention to find a way to make a lower control layer, which keeps a bunch of top layer kites in a side swaying synchrony to pump the common anchors?

Sounds like a noble goal for long slide pumping , but any pumping of course has reciprocal motion and wear issues.
My other concern with this type of multi cell common control line scheme is stretch in dyneema
What happens if you get gusts more on one side adding a bulge / blister to the network ?
Does that mean the control goes out of phase across the net - worth doing a test demo for sure.
Also you can get the "200 non-creep grade, but it has it’s own vulnerabilities

No, line strain is not a serious problem, just the glorious job of a SpiderMill sail-trimmer to occasionally adjust whatever. Nylon is still a go-to fiber for springy action, returning gust energy. Sails will also auto depower. Sailing is a mature art.

Yes, the lower layer is the control layer, or rather, upper and lower differential offset control the bulk. There is no excess wear if the bit of line at a pulley is heavier.

Here you see passive dynamic stability. The kite oscillates powerfully while staying up without a pilot kite. It’s the simplest cheapest sort of wing. Simply trim a drogue flat for it to become hot and dart about.

Rod, I can hardly post anything here under your posting restrictions and will soon be banned again by Windy Skies. So many photos, videos, and texts of the last two years experiments. Contact me directly to see and read more.

It looks like a Parachute converting wind energy by oscillations 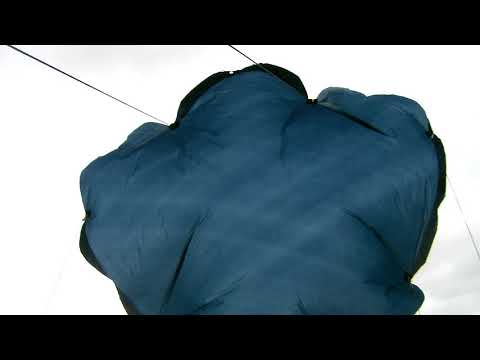 Exactly, Pierre, but the performance secret is to pull the canopy flatter toward its center, so it flys more like a wing than a windsock.

Lee’s UFO kite was the starting inspiration for kPower and then JAL to rig without the hoop, pulling the center inward to keep it flat- 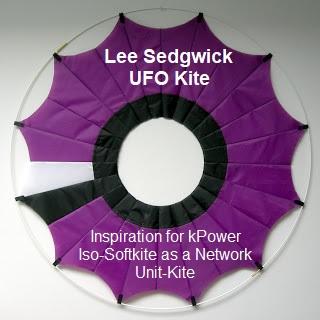 I think we have pretty much solved megascalable AWES conceptually. Single-line AWES archetypes with rigid members and complex flying parts are dangerous and do not scale much.

I like that you’ve shown a jiggling soft kite in a network.
It would be good to demonstrate it has capacity to do work.
e.g. would that stroke work against a reciprocal load or does the kite deformation for the return stroke rely on the anchors being fixed solid to snap the kite shape and motion.
For now it seems very low lift in terms of AWES generation proofs.
Is it even the kite shape causing this motion or something like Von-Karman vortex shedding behind it?

There are varied ideas as to how to develop AWE, like the popular demand to “show power fast”, which is fine. However, the “newborn baby” view focuses more on discovering and exploring the operating principles, to then let others, as independent third-party validation, show the power without doubts over claims.

Thus, pioneers of flight do not have to show optimal performance right away but get vindicated in due time. The Wright Brothers where first in flight with a feeble flivver. Jumbo jets took another 60yrs to mature. Some folks help with just ideas, others only make power, not new ideas. We are such a team.

How lucky to see AWES power potential early, before its obvious. Any kite pro can “feel” power in this SpiderMill cross-section schematic, if not formalize the math nor ever measure by dynameter. 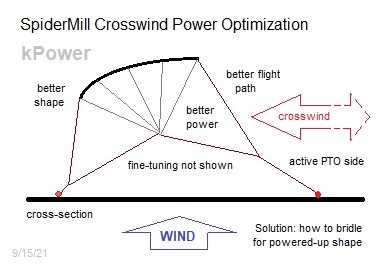 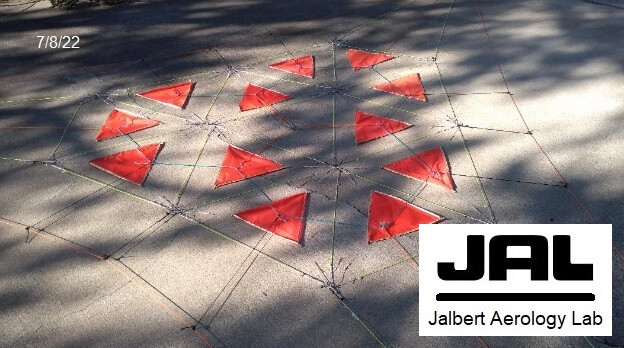 There are many hands-on lessons to digest; mistakes to learn from and unexpected gifts of new work.

Last X1 build obstacle happened by haste and laziness, then a day of rework-

Now comes Tuning the rig statically; everything in place at suitable tension. Let us define Trimming as small rig adjustments made during actual operation.

Time to look at the wind forecast…

It would be work were it not fooling with kites.

Unable to link control-motion video under Moderation restrictions. This is not the place for unfettered knowledge-sharing.

My account is restricted in many bothersome ways, including not allowing video links.

Its Moderation’s choice to restrict accounts.

I seem to be banned again. This may be “goodbye” for another year.

?
OK
This conversation now makes no logical sense.
?
Do you need some help to produce or host this video before publishing?